The issue of bicycle access on the RiverPlace path/Willamette Greenway Trail was on the agenda of the Portland Bicycle Advisory Committee last night. I was unable to attend but I have tracked down comments from four people who where there in order to provide you with an update. 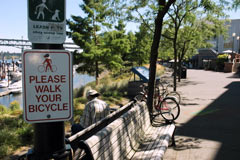 This sign is ignored by most cyclists.
(File photo)

In addition to the regular committee members, in attendance were; Karen Stiles, owner of Waterfront Bicycle Rentals; and Bob Downing, district manager for Portland Parks and Rec (they manage the path).

Chair of the Committee, Mark Ginsberg, said both Downing and Stiles “agree that the security people are violating the law by trying to enforce things that are not laws on property that they do no have jurisdiction over.” He also added that Downing now plans to take the issue to the condo owners association and that Stiles “seemed happy” that things are no “going in the right direction.”

Bike shop owner Karen Stiles is the one who initially contacted me about this issue. After the meeting, she reported that, “all in all I felt it was a good discussion… The committee stressed the need to exhaust every avenue before ever considering removing cyclists from the path.”

As for potential new signage, Stiles says Downing (with the Parks Bureau) expressed that he was, “taking it slow” and wanted to come up “appropriate signage.” She added that Downing, “acknowledged our concerns over the strong tactics of the hired security guards towards cyclists and said he would speak with the security company.” 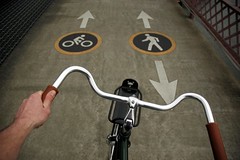 Stiles would favor markings like
these (on the Hawthorne Bridge)
on the RiverPlace path.
(Photo: Jonathan Maus)

Stiles remains concerned that Downing continues to speak about “looking at language that Metro has regarding diverting traffic in congested areas.” Stiles does not want any discouragement of cyclists from using the esplanade path. At the meeting, she suggested similar marking to the ones used to separate bikes and pedestrians on the Hawthorne Bridge.

At least two citizens attended the meeting. Both are regular BikePortland readers.

Matt Picio said that someone at the meeting (he forgets who) pointed out that if the city argues for re-routing cyclists away from the path (there’s an existing, on-street bike route) it will look like they’re “taking both sides of the issue” due to their stance against re-routing away from the river on the SK Northwest case.

Another reader, Jeff Hadley shared this handy summary of the meeting:

I’ll continue to follow this story and report on any developments.

I was at the meeting too, and was pretty shocked to learn that Karen has to contend with condo owners camped outside her business telling people who rent her bikes that it is illegal to ride on the trail, and that she had security guards jumping in front of people on test rides.

One thing that was mentioned was that there may not actually be evidence of an actual problem, and that this might be more of a reaction to a perceived issue.

I was really glad to see Mark Ginsberg offer to hold a meeting (Zoobomb style) between Karen and the security company.

As a former condo owner and HOA board member (in the Pearl, of all places), I felt that the type of community that develops around the collective petty self-interests of the owners brings out the worst in people. Rules and by-laws are regularly overlooked when it suits those present, and long-term investments are never voted on, because everyone\’s looking to flip their unit in a year or two for big money. But what brings the condo owners together is a perceived outside annoyance, like the dreaded outlaw bicyclist. I\’d sorta like to be at the next HOA meeting, when someone explains to them that they aren\’t really allowed to set policy for city property, but then, I\’ve already been there, so I could imagine the whole thing. After a while, they\’ll lose interest and go back to securing sweetheart rental exemptions for their friends. I\’m just glad to live in a little house in the Southeast where standards are low, and ride my bike past the uptight divorcees who dress like real estate agents.

The Pilsner Room has a good happy hour, though. I recommend you ride your bike right up to the tables.

I was shocked when I first heard about the security guards physically disrupting bicycles on the pathway due that the space is public and not within their legal jurisdiction. It\’s good to have a lawyer confirm that such notions are indeed true. I\’ll be curious to see what comes of the pathway.