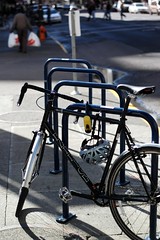 Did you park your bike at a rack outside your favorite store or café recently? If so, you might have been using facilities paid for by Portland’s Bicycle Parking Fund.

Created in 2004, the Bicycle Parking Fund is one of several tools being used by the City of Portland to make sure that cyclists have a place to park their bike once they get where they’re going.

Here’s the basic gist of how it works: Every new or renovated building is required to provide a minimum amount of short-term bike parking. The building owner or developer may either meet that requirement by installing bike racks themselves, or by paying into the Fund. Developers must pay into the fund based on how many spaces are required under the code for a development of that size.

So far, the Fund (which currently has about $200,000 available) has only installed staple racks (see map of current and planned installations below), but in the future, city of Portland bike coordinator Roger Geller says the money might also be used to install larger racks, such as bike oases or on-street corrals. 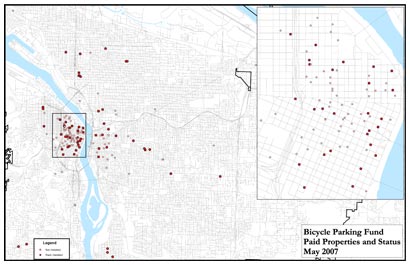 Geller says one key aspect of the Bike Parking Fund is that it provides more flexibility for property owners,

“Our goal is to provide short-term bike parking in a way that both meets code and makes sense for the property owner.”

Geller adds that racks installed through the fund must serve the building who initially paid into the fund, “the idea is to install racks as close to the building as possible.”

“The idea was that the fund would generate enough to put staples in the right-of-way within 50 feet of main building entrances, thus meeting the code requirement, and some extra to help PDOT fund higher-dollar projects that would actually provide covered parking in the right of way in some locations (i.e. on curb extensions).” 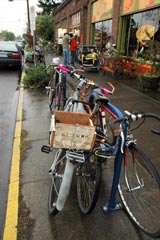 In 2004, with Ciarlo at the helm, the BTA took aim at the former short-term bike parking code. They documented a number of instances where the code was either ignored or was implemented in such a way as to be unusable, especially in newer Pearl District developments where developers were extremely reluctant to sacrifice valuable space in front of their buildings for short-term bike parking.

According to Ciarlo, a task force (which included developers, the BTA, PDOT, the Bureau of Development Services, the Portland Business Alliance, and others) was formed to address this issue and the result was compromises on all sides.

In addition to creating the Bike Parking Fund (also known as a “fee in lieu” system), she remembers that,

Erik Mitchell has volunteered with the BTA since 2005 to monitor development applications for compliance with the short-term bike parking code. He says,

“Since the fund has been established, I would consider compliance to be good—not great, but good (say 4 out of 5).”

He points out that installing racks isn’t always the end of the story,

“There are some who do the install, but access and upkeep are lacking, so we need the bike community to help be the eyes to let us know when there’s a problem.”

Mitchell points out that code only deals with minimum requirements, and doesn’t help when demand exceeds what the code requires.

As Portland grows up as a bike city, the Bike Parking Fund will continue to be an important tool to ensure that cyclists will always have a convenient, accessible place to park.

Very informative. Thanks, Jessica. Good to know someone besides BDS is watching for compliance.

As a relatively new biker, the \”where to park?\” question still gives me pause frequently, so it\’s great to hear about this program.

On a related issue, does anyone know if the upcoming Bite of Oregon festival (this weekend in Waterfront Park) will have bike parking set up? I\’m supposed to meet someone who\’s taking the MAX in and I have no idea where to suggest meeting because I have no idea where I\’ll be able to lock up my bike. Any suggestions?

I would have asked this question in the forums, but I only just registered and apparently I don\’t have permission to post yet. 🙁

Michael, one good resource to know about is 503-823-CYCL. You can use it to request bike parking installation (among other things). They only take requests for bike racks on public property (e.g. sidewalks), not in a private lot, garage, or building.

Regardless of whether they \’meet code\’ or not, the Brewery Blocks are seriously deficient in bike parking; all the existing racks are full and people lock bikes to every piece of street furniture and tree available. With $200K sitting in the fund, shouldn\’t the city be installing more racks in areas like this now???

If you call 823-CYCL and request bike parking at your favorite business, can the city provide for the parking there even if no money has gone into the fund from that area?

Also note that on-street bike parking is an option for neighborhoods, like the Brewery Blocks, where the sidewalks are also constrained.

Michael M, regarding bike parking at the Bite this weekend: The BTA usually sets up a bike parking corral at the entrance to the Bite closest to the Salmon Street Springs fountain. It\’s staffed all day, as far as I know, and usually has lots of room for lots of bikes to park.

Note however, that entry into Sunday\’s Bridge Pedal gets you free entry into the Bite, so it could be crowded on Sunday.

If the city does pursue using the bike parking fund money to build oases, I hope they\’ll use their own bike parking code as a guide for where to install them. The 50 foot rule is elementary to the usefulness of any given rack.

Just look at the new oasis at 38th and Hawthorne: you could probably get as much utility out of just two or three staples on that corner, because the only business within 50 feet is the Bank of America. Even though it\’s just half a block away from Powell\’s, it\’s hidden around the corner so that people end up triple-locking to the gas meter pipes in front of Pastaworks instead.

It\’s not an exact science, but if the racks aren\’t visible from the locations they\’re supposed to serve, they probably won\’t be heavily used. I bet the oases on Hawthorne would be much more popular if they were on the Hawthorne side of their respective corners rather than obscured from view on sidestreets.

Although I appreciate the oases for being sheltered and on level concrete (instead of the sloped asphalt of the parking lane that makes your bike roll towards the curb as you lock up in an on-street bike corral), it is clear that on-street parking is more cost effective. Oases and corrals each provide parking for roughly 20 bikes, but based on the numbers that I\’ve seen here on BikePortland, oases cost eight times as much ($40,000 to $5,000).

Re: bike parking at the BIte of Oregon. The BTA has normally done that but isn\’t this year because of a staff crunch (hopefully will again in the future).

But I think the Bite is putting up a bike corral on its own – a bunch of barricades you can lock up to. Not sure where it\’ll be. I\’ll update here once I get a call back from them.

Jessica (re: #6), can you say how the bike parking request program is funded? I am hoping that something like that could be implemented in Beaverton and Hillsboro.

The Hawthorne Bike Oasis was paid for by mitigation funds from the movie The Hunted, not the Bike Parking Fund. So, it didn\’t have the same limitations as the Fund-installed parking.

Peter, I don\’t know how the bike parking request line is funded, but I expect it is a line item in the City budget? I\’ll see if Roger can let us know.

I take back what I said in #9; I passed by the 38th and Hawthorne oasis this afternoon and there were at least 10 bikes there. All new racks are welcome, I just wonder about how to have the most efficient impact with limited funds.

In any case, that area still needs more bike parking, even just three months after the new oases.

The Hawthorne Blvd project was supposed to put in more bike parking than just the Oases, there were supposed to be staples throughout the district on the Blvd, several per block. Any report back on that? If they weren\’t installed, that\’s another thing to talk about PDOT with, I helped work to restore full funding to that project and staples throughout the district on the Blvd. were part of the plan.

Thanks for the info about Bite of Oregon. It\’s frustrating that the BoO\’s website contains all sorts of vistor information, including where to park a car, but no mention at all of bicycles, nor of a bike corral, nor of the Bridge Pedal. (I can\’t do the latter anyway, because of a prior commitment, but you\’d think it would be mentioned on the website under the Special Promotions section.) I guess, even in Portland, reflexive thinking is still auto-oriented. If, as Scott Brinker mentioned at last week\’s debate, cycling is an important part of Portland and Oregon\’s growing tourism industry, then events like Bite of Oregon should do a better job of taking cyclists into consideration in their promotion and planning.

Anyway, I\’ll try that phone # tomorrow and keep checking back here for any more info. Thanks again.

1500 SW 1st has an retro bike rack from my junior high days. How do I get them to update this rack, which FBI dudes use, so you think they\’d do something a little more secure.

Deb, if it\’s on private property, your only recourse is to request that the property owners change it to a more modern rack; they aren\’t obligated to do it. It may help to point them to these guidelines from the City of Portland about how to install good bike parking (rack type, placement, etc.).

Another alternative, if there isn\’t already a blue City bike rack on the sidewalk out front, is to call 503-823-CYCL and request that the City install one. It wouldn\’t fix the old-school rack, but it would provide a better option.

I know it\’s a bit late, but does anyone know where on fourth those diagonal rack are? Thanks.