About 40 cyclists gathered in downtown Portland tonight for the monthly Bicycle Master Plan Ride. The ride was hosted by Portland’s bicycle coordinator Roger Geller to garner feedback and ideas as part of his effort to update the city’s Bicycle Master Plan. 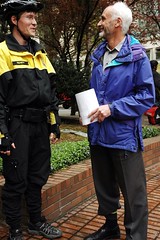 Spirits were high as longer daylight hours combined with some pre-ride publicity gave Geller about twice the usual turnout. The crowd was a mix of advocates, experienced cyclists, newbies, and I even spotted former Portland mayor Bud Clark.

A crew from a local television station was there to beam the action back to living rooms throughout Portland.

Police officers Josh Letter and Robert Pickett of the Southeast Bike Patrol were on hand to lend support. They chatted with riders and joined the group for a post-ride get together at the Rogue Ales brew pub.

A circuitous route introduced us to all the various bikeway treatments (or lack thereof) in northwest Portland. The hot-spots of discussions I heard included; bike lanes mingling with MAX streetcar tracks on NW Lovejoy, shared lane markings on NW 19th, and how to cross over I-405.

Unfortunately I wasn’t able to join the group for the post-ride discussion, so I hope some of you will chime in and let us know how that went.

For your audio enjoyment, I recorded Roger Geller’s pre-ride pep talk. It’s about 3:30 long and he explains what these rides are all about (he also confesses that his real goal is to turn to Portland into Amsterdam by August 😉 ).
[audio:GellerNetworkRide.mp3]

Check the rest of my photos from this ride.

Er, those are Streetcar tracks, not MAX.

(Thanks Chris. My mistake. I’ve edited the post. — Jonathan)

Great – if a little scattered at times – ride. The route markings on the map led to some impossible directions (I think, since I just followed others who were reading the map), but maybe that was the point of it.

The discussion at Rogue was interesting, especially the part with Officers Pickett and Letter taking our questions. We tried to tackle the selective enforcement issue, with the conclusion that, although better laws would be preferable, a large part of enforcement comes down to the discretion of the officer.

I asked why the PPB doesn’t make all officers rotate through the bike patrol duty – keeping the same amount of bike patrols so as not to increase the costs, but forcing all officers to do those shifts. Officer Pickett said there is considerable resistance on the part of some officers to getting on bikes. I believe it’s because they don’t like being in a vulnerable situation, which is exactly what they need to be to better understand our experience. Officer Letter commented that he himself resisted bike duty, until he did it, and then found that he loved it. We need to break down this wall of resistance, and maybe we’ll have a better Police Bureau overall. In the meantime, let’s applaud the officers who “get it” already.