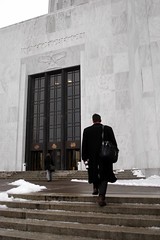 [The Capitol building in Salem.]

If you’re interested in this year’s bike legislation in Salem and beyond, you won’t want to miss an upcoming discussion being hosted by PDOT.

As part of their ongoing Bicycle Brown Bag series, they’re bringing in Scott Bricker of the BTA and Karmen Fore from U.S. Congressman Peter DeFazio’s office for a statewide and national perspective on current bike-related legislation.

To brush up on the topic, read my two reports from a recent trip to Salem, a discussion of the BTA’s “Passing Law” bill and the BTA’s 2007 legislation page.