Radio host sees other side after ride 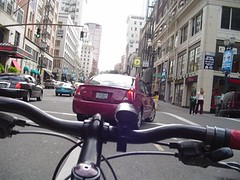 [A cyclist’s view of Broadway Blvd.]

As I mentioned last week, P.K.—the embattled radio personality for KXJM whose recent on-air comments got him into some hot water—went for a bike ride with a local reporter.

Yesterday, a commenter tipped me off that he talked about this ride on his show last Thursday. I just finished listening to the show via iTunes.

P.K. said they went on a three-hour ride that included a cruise on SW Broadway Blvd., in the heart of downtown Portland.

After the ride, it was clear he had a renewed sense of just how dangerous the streets are for bicyclists. He said he understands why cyclists get aggravated with motorists…and vice versa.

Overall he sounded like an open-minded, level-headed guy, far from the macho and inciteful “shock-jock” tone he had on previous shows.

I could tell P.K. was taking care to make this segment light-hearted and humorous (he joked about his butt being sore and how he was afraid of how the photos would turn out).

He said the ride was “interesting” and “fun” and even expressed how much he liked the slower pace of being on a bike downtown:

“The thing that’s different when you’re riding a bike is that you get to slow down and really see some stuff.”

“When we did the show last Thursday I was a little on the mad side, and I think that this ride definitely brought me back to see the other side.”

He then made a direct reference to his comments from that fateful (and now mysterious) July 13th broadcast:

“It was a bad attempt of a joke, it angered some people and I’m willing to ‘fess up.”

Towards the end of the segment P.K. said he’s now “in the middle of the road” and that he “understands the aggravation from both sides.”

I think it’s cool P.K. is now intimately aware of the dangerous riff on our roadways between cyclists and motorists and that it’s a problem that needs to be solved. The question now is, how do we solve the problem and to what extent will P.K. and KXJM be a part of the solution?

Kudos to Willamette Week reporter Jason Simms for doing the ride and I’m looking forward to reading his story (and to seeing the photos of P.K. on a bike) in tomorrow’s paper.

That link from iTunes does not seem to be working…

Since that show on 7/13, I’ve had burning cigarettes thrown on me, I’ve been called an asshole for being on the road and I spend a lot more time looking over my shoulder during my commute.

I’m afraid that one bike ride isn’t going to make me feel a whole lot better about this situation. I’m glad he gave it a try, but if this is all it takes to get him off the hook I’m not going to be too thrilled.

I agree with Drake. Personally I’d be willing to let this go with some PSA’s read by PK on air for a couple weeks. Plus maybe some free stuff for kids or charity. Just my 2cents…I’m afraid if we try and drag it out too long we’ll end up with nothing.

those are promising comments from p.k., but i’m with everyone else. i hope they follow through in a more significant way on their promise to jonathan to support the bike community, whatever form that takes.

I agree with all of you. Please don’t take this report to mean I am all the sudden best friends with P.K. and that I think we can move on.

Legal efforts to acquire the tape, complaints to the FCC, and direct negotiations with the station are being considered and/or are happening as we speak. Stay tuned.

Now maybe someone can get the Tribune’s Phil Stanford, who seems to hate cyclists (as well as just about everthing in Portland that appeals to the under-50 set) out for a ride like this. Might open his narrow mind a bit.

Clearly, the best way to be a positive advocate is to attack anyone who holds an opinion different to your own.

A real question, not rhetorical. Who’s attacking whom?

If PK and and the station are really sorry … they why do they not release the 07-13-2006 show and let the us and the FCC hear it? The damage to the bicycling community has been done. I firmly believe that the only damage control the station is doing is to cover their ass.

I don’t believe anything that comes out a radio station’s mouth. i used to work in radio, people will say ANYTHINg to get you to listen,DONATE, or support thier sponsors, this would also could toward SAVING THEIR JOBS. wouldn’t you lie to save your high paying, ego-booosting job? F PK (sorry jonathan) but i personally believe PK is full of shit. Media is media and F that

A similar thing happened in St Louis last week but only heard by one cyclist. We are waiting to verify the facts before acting. Helps to see how another community is dealing with it.

Billh,
this show was also only heard by one cyclist in the beginning and only 1-2 more as things developed. get it out there and let the community decide if it is an issue.

Agreed. The best part about this whole sad situation is that it has put the issue out where it can be discussed.

I want more, but PK just shutting up is enough that I’ll stop calling the advertisers, governmental agencies, and politicians as long as the show is “bike neutral”. If I were asked for ideas beyond that: perhaps 95.5 can be encouraged to participate in next months BTA bike commute challenge? I worry less if he is sincere, and more about what he broadcasts.

The whole episode further exposed that many drivers don’t have a clue when it comes to traffic law and bicycles. It’s not covered or tested for a drivers license, If you want to know about bicycle laws, you have to take an active interest in looking it up. That needs to change.

So what I want, ‘Jammin 95’ or the Playhouse can’t give me: Making bicycle education a priority at the DMV. Tough prosecution of drivers who kill or maim cyclists while illegally or negligently operating their vehicle. A more informed Traffic Division at the PPD, and rational bicycle operator laws/fines that take into account that while we are traffic, we are different than cars.

Gestures like bike givaways / rides / contributions to non-profits are meaningless for the now-encouraged-to-attack-cyclists listeners. I think the station / show should be devoting some time to educate listeners about traffic law and sharing the road. I don’t know what’s being done in this regard, there is just no way I’m going to listen to the 5-hour show every day to hear what PSA’s or other announcements they’re making. Anyone who has this info, feel free to post and I’ll ask the station also.

Here’s the story in our neck of the woods. To put this in context, about a month ago, there was another DJ in St Louis with a guest commentator who said “cyclists belong under my car”. The cyclist who heard it misattributed it to the DJ himself who then made a big deal about “checking facts” before making accusations and basically threatened a slander lawsuit, which completely missed the point that the comment was made on his show and no one contested the comment at the time. After a big backlash from local cyclists, much of it abusive and over-the-top, which gave the DJ some great material to bash cyclists, there was a forced on-air apology from the guest commentator. Anyway, that is the context for this most recent “comedy” routine, recounted here . . .