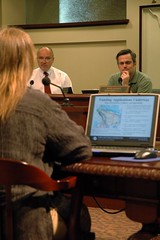 Yesterday the Parks Department presented their Regional Recreational Trails Strategy to the Portland City Council. In attendance was a who’s who list of Portland’s trail advocates including; Scott Bricker from the BTA, Gail Snyder from Friends of Forest Park, Bob Akers, Barbara Walker and Walter Valenta from the 40-mile Loop Land Trust, Don Baack from Southwest Trails, Pam Arden of North Portland Greenway, Roger Louton of PUMP and many others.

In her opening remarks to City Commissioners, Parks Director Zari Santner expressed her hopes that this plan would lead to a more organized approached to funding and building trails: 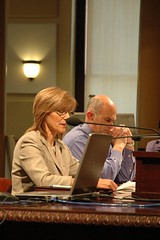 “In the past trail acquisition was usually piecemeal or funding opportunity driven…we hope this plan will give us an expedited way of getting more trails completed…we’re confident we can make it happen.”

Parks planner Gregg Everheart then presented a powerpoint presentation of the plan which is available as a PDF on Parks’ website.

After the presentation, the floor was opened up to questions and testimony from the public.

First to comment was Commissioner Adams. He wants to push the Sullivan’s Gulch Trail up in the priority queue (it is currently way down on the list, projected for completion by 2025). Sam is very interested in seeing this trail get built sooner rather than later because he thinks it’s a perfect opportunity for what he has coined “bicycle oriented development”.

Akin to the urban design trend of transit oriented development (think Portland Streetcar and the empty nester nirvana that is the Pearl District), Sam wants city planners and developers to start thinking about how bikeways can spur development and boost the regional economy.

Sam enivisions the Sullivan’s Gulch Trail as an off-street, shared-use path (like the Springwater Corridor) that goes from I-205 to downtown, passing four major business districts; Gateway, Hollywood, Lloyd, and downtown. Check out the Sullivan’s Gulch Neighborhood Assoc. website for more on this exciting trail. 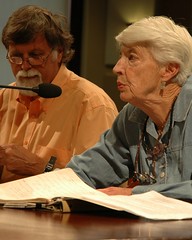 There were 14 members of the public that offered testimony.

Barbara Walker, the dynamo queen of our trail network and a founding member of the 25-year old 40-Mile Loop Land Trust, implored City Council to “finish the loop”. She said it is the “hub of the trail network” and that just a few gaps remain.

Pam Arden spoke up for the fledgling effort to create a trail that connects Cathedral Park in St. Johns to the Eastbank Esplanade. Known as the North Portland Greenway trail, she said there’s a strong amount of community support and growing energy around making this happen. Check out NPGreenway.org for the latest. 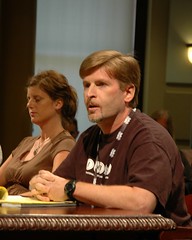 Roger Louton from PUMP brought the voice of mountain bikers to the table. He encouraged the Commissioners to not let bias and misperception cloud their judgement when considering mountain bike accesss in our city parks and he said he looks forward to working with the City to achieve Platinum status.

Scott Bricker, policy director with the BTA (and best-dressed bike advocate in the country) said usage rates continue to increase and that, “we need to build more trails to help ease congestion on some of our popular paths.”

When all was said and done, it was an impressive showing by trail advocates. Their passionate and knowledgeable testimony is a great example of why Portland is such a great place to live.

If you’ve never attended a City Council meeting next week is a perfect opportunity. The Council will be adopting a resolution to designate bicycles as an official “target industry” withing the City of Portland. That will be July 5th, 10:30AM at City Hall.

Anyone know when they broadcast these meetings on the pub. access channels? Any way to find out the schedule? Thanks