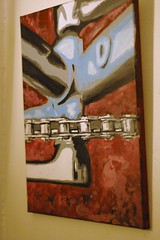 The Made in Portland: Bicycle Show and Art Exhibition is really shaping up (download event flyer).

In addition to nine Portland-based independent bike builders, I just confirmed that Chris King Precision Components will attend. Chris King (based in Northwest Portland) makes the world’s best hubs and headsets (they were used by a guy named Lance in the Tour de France). Their components are a revered combination of beauty, function and reliability…and they’re made entirely in Portland.

Joining this stellar line-up of bicycle craftsmen and women is an exciting gathering of bike artists. Recent additions include Shaun Deller and Tiago Denczuk.

Shaun Deller is well-known for his Recyclist cycling caps but he is also an accomplished artist whose series of ink drawings have appeared in Dirt Rag Magazine.

Tiago Denczuk is an artist-in-resident at the Alberta Clown House. In addition to his mini-bike culture inspired acryllic paintings, he is also a devout Zoobomber and self-identified “bike punk”.

So mark your calendars for next Thursday, July 6th from 5-8PM and join Commissioner Sam Adams and Portland’s bicycle artisans at City Hall for what is sure to be a memorable evening.