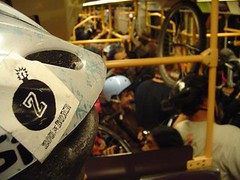 [On the way to Zoobomb.]

There was a bad crash during last Sunday’s weekly Zoobomb ride and KGW-TV (our local NBC affiliate) decided to make it one of their top stories. They splashed this highly misleading headline on their website:

They did a full report that included interviews with a Zoobomber and BTA Executive Director Evan Manvel. [A link to the video and the text of the story can be found here.]

I watched the report on their website and I was disappointed. KGW put together a misleading and inaccurate representation of Zoobomb and this incident. Inaccuracy is OK (we can’t expect everyone to know what Zoobomb is all about), but what concerns me was the tone of the reporters and the fact that they tried to create news, instead of just reporting what happened.

In fact, I spoke with KGW-TV reporter Keely Chalmers on Monday and she said they probably wouldn’t run the story because no car was involved in the crash (they initially thought there was). So instead of not covering the crash, they decided to sensationalize it and tried to make something out of nothing.

In particular, I question their misleading headline, “…’zoo bombing’ ritual gets more risky.” Crashes happen on Zoobomb all the time. Therefore, why would this crash suddenly make it “more risky”?

They also refer to Zoobomb as a “daring ritual,” making it seem like some sort of fringe, underground activity.

KGW even admits in their coverage that,

“Portland police officers said they haven’t cracked down on the zoo bombers because there have been very few complaints about them.”

This is true. But when you hear the way the story is presented it’s almost as if KGW is encouraging their listeners to pick up the phone and complain (and I wouldn’t be surprised if a few of them did).

The other sensational point KGW harped on in their coverage was that it was illegal for them to be riding on the highway. Just to clarify, it is legal to ride on Highway 26 from the Zoo down to the Jefferson Street exit (right before the tunnel). However at this time that exit is closed so there might have been some confusion due to a lack of warning and signage further up on the highway.

So let’s review: Zoobomb is a well-known activity and social group that rides down from the Zoo every Sunday night. It can be dangerous (if you choose to go fast) and last Sunday someone had a bad crash. They didn’t hurt anyone but themselves and even the cops have no beef with them. Where’s the story?

This type of coverage is frustrating and reminds me of a similar situation with this story in The Oregonian last winter.

I hope someday the media will get over their bias against people that ride bikes. I think once more of them begin riding themselves we’ll see a change in their sensibilities and reporting. But until then, we have to put up with this junk.

For more on this incident, read this thread on the Zoobomb forum.

Thanks for posting this! I called KGW and said the same thing about the “Portland police officers said they haven’t cracked down on the zoo bombers because there have been very few complaints about them.” part…

Keep a eye out for the pepper next week as they may show up!

Way to go, Jonathan! Show them bad reporters what real journalism is all about!

Does it ever get lonely up on that cross?

As we said at the start of every morning on a U.S. crossing back in the day, “Be carefull & kick ass”. Tankognolo Bob

Keep in mind that sensationalism is KGW’s stock in trade. They are in the entertainment business, their “News Channel 8” moniker notwithstanding. In other recent “news”, they reported a shooting in North Portland as a school shooting, even though they knew that the nearby high school was in no way involved. They also characterized a single case of the Mumps in another school as an “outbreak”.

“You see them on the streets, in the parks, on Tri-Met, and at your work. They’re as popular as meth and more dangerous than pitbulls! Can the ever growing number of cyclists on out streets be a threat to your family?

Ok – so you just made me spit out my lunch. That was so funny!
As someone who works in TV – you’ve got a future as a tease writer!

Vey nice, Brad. That cracked me up. What’s really funny, though, is it could be a serious tease on that station, followed by footage of people simply rolling by on bikes, with an ominous voiceover and some crash zooms!

Brad,
I just spit my lunch all over Anita.
Brilliant.

Don’t let the facts get in the way of a good story! 🙂

The cycling community can rest assured that they are in good company when it comes to this kind of sensational reporting. In fact, I would start to get worried if the media didn’t run a story like this from time to time.

Unfortunately I think that these media outlets feel they need to dumb down their product before it can be digested by their viewers. Which is too bad. I think we’re smarter than what they will give us credit for.

I see the same kind of reporting every time there is ANYTHING having to do with either an aircraft, unforecast weather, the west nile virus, or Tom Cruise.

Sometimes I just have to turn the channel to a show with a firmer grasp on reality – like Jerry Springer.

I have had at one recent phone conversation here at Audubon Society of Portland from a terrified hiker of who almost got run down by a reckless Zoobombers riding illeagally on Wildwood Trail around Hoyte Aboretum.

By all means, have fun and Zoo Bomb but please obey the rules meant to protect human safety and the ecological health of our parks and natural areas.

How do they know it was a Zoobomber? Did the wreckless cyclist sport some kind of Zoobomb paraphernalia, or were they just associating anyone doing something bad with those meddlesome Zoobombers?

Zoobombers ride ON THE STREET on Sunday night. So unless this hiker was hiking down Fairview on a Sunday night it wasn’t a Zoobomber. There are tons of people illegally riding the hiking trails up there. They are not Zoobombers. Their bikes are much nicer.