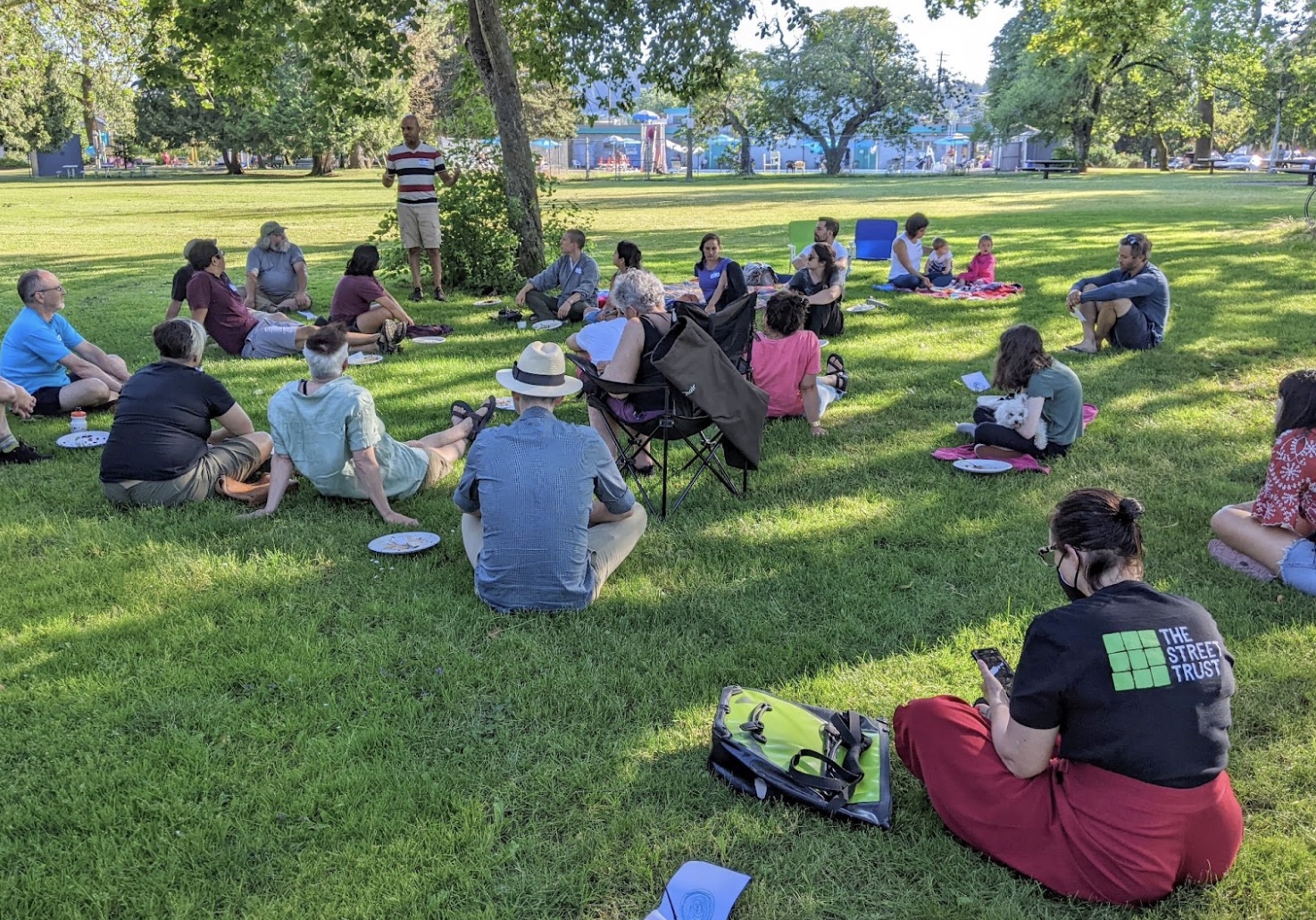 Publisher’s note: I’m happy to share our first story from Paxton Rothwell, a former engineer and volunteer activists who’s turned his attention to writing about transportation.

On Wednesday July 13th, Portland-based nonprofit Oregon Walks hosted 30 people in Montavilla Park to discuss the future of 82nd Avenue. This was the first meeting of the 82nd Avenue Coalition, a still-forming group of business owners, residents and advocates who want to transform this street from a car-centered ‘orphan highway’ that divides Portland, to a community corridor that connects it.

They face a massive task ahead.

A group walk by advocates last year shined a light on the poor sidewalk conditions and unwelcoming environment along the corridor. S.K. Amaro, a community member from the Lents neighborhood, shared at the meeting last week that 82nd Avenue has the feeling of an emotional and physical wall. “You cross [82nd to the west] and you hear the birds sing and the roads are paved.”

Oregon Walks Executive Director Ashton Simpson put the effect of 82nd Avenue very plainly, “this street has always divided us as a city.”

Standing in front of the group seated in a grassy part of the park, Simpson recounted the recent history of 82nd Avenue. The back-to-back pedestrian deaths in early 2021 and resulting political pressure from advocates, Rep. Kham Pham, and many others ultimately led to the agreement to transfer this ‘orphan highway’ from the state’s control to the City of Portland’s. The City is now poised to make crucial safety upgrades to 82nd Avenue. According to Zachary Lauritzen, Oregon Walks’ 82nd Avenue Coalition Manager, Rep. Pham “secured the funding [for this Coalition] in order to raise up community voice[s] as the jurisdictional transfer work goes into place.”

This transfer came with $185 million in funding for much needed safety improvements. $80 million has already been allocated for new pedestrian crossings and lighting upgrades. Some of these upgrades (like the partially built crossing at NE Pacific Street I used to get to Montavilla Park, see below) are already being constructed.

What’s to come with the rest of the funding? “The other $105 million is [still] being programmed. I’m hearing from city staff that they want to hear from the people,” Lauritzen said. This is where the Coalition’s guidance will come in. In a followup email, Lauritzen assured me that “we will move in the direction where the voice of the people takes us.”

The Coalition has already attracted a broad range of interested members. In attendance were representatives from Verde, The Street Trust, Portland Audubon Society, the 82nd Ave Business Association, and people representing neighborhoods from Lents to Madison South. Metro Councilor Duncan Hwang was also in attendance. When asked about what planning is in the pipeline at Metro for 82nd, Hwang replied, “We’re starting the process for a new high capacity transit route.” He added that Metro is also planning for transit-oriented development along the route.

If all goes well the Coalition hopes to use this process as an example for how to transform other urban arterials and ‘orphan highways’ into people-centered community corridors. Just what type of people will be centered, is also a hot topic.

Coalition members expressed a strong interest in making sure changes to the street come with anti-displacement efforts. To honor the diversity that already exists on the 82nd Ave corridor, the Coalition suggested that each district could have its own theme.

This was the first of many meetings and remains open to new members. If you are interested in attending the next meeting, send an email to Zachary Lauritzen at Oregon Walks (zachary@oregonwalks.org).

In related news, the City of Portland just posted the volunteer application to be part of their Building a Better 82nd Avenue Community Advisory Group.