As our soggy spring rain let up and the sun peeked from behind the clouds I began thinking about another kayak adventure on the Tualatin River. Transporting a kayak to the dock by bicycle from the county line between NE Tigard and SW Portland may seem like a difficult task with a twelve mile round trip and 600 feet of climbing.

Make it a tandem kayak behind a bucket bike with a 6 year old riding in front and it gets even more interesting!

We converted an old kid’s bike trailer into a kayak hauling machine by lengthening the tongue and adding a bracket to hold the front of the boat to the tongue. Our bike has e-assist and plenty of stopping power with 4 piston disc brakes front and rear. The kayak tows remarkably well. Width is not much of an issue but turning radius is a consideration as the bike, trailer and kayak are 25-feet long. This is not something I would take on the Fanno Creek Trail which has some tight turns near Downtown Tigard. The most direct route is to ride on SW Hall Blvd (State Route 141).

There has been much news about jurisdictional transfer of ODOT facilities lately. The stretch of SW Hall Blvd through Tigard is one that I have been following closely since we cross it on our trip to school by bike. It is in terrible condition with deteriorating asphalt, sporadic sidewalks/bike lanes, high speed limit (40 near our school!), many drain grates in the bike lane and constant debris. The current widening of 217 will require replacement of the SW Hall overpass near SW Pfaffle Street. The new bridge promises better walk/roll/bike safety but it’s still a painted bike lane in the drawings.

I’m hoping with jurisdictional transfer this route will get better. Fortunately I ride it often so I know the quirks: Take it slow at the railroad crossing near SW Commercial as there’s a big bump in the asphalt; watch drivers in the s-curve near the skate park, they tend to drive in the painted bike lane; there’s a ton of debris near the Tigard Library; a homeowner blocks the right of way with their trash bins near SW Bonita. We should need this level of expertise to navigate to the river!

Even hauling this long load, it’s not that bad of a ride. Turning down SW Durham in front of Tigard High School and taking SW 92nd to Cook Park is one option. The other is to stay on Hall (which changes to SW 85th) all the way past the Clean Water Services treatment plant. This leads to a wide multi-use path that takes you to Cook Park as well.

Wayfinding is not great at Cook Park and many drivers get lost trying to find the boat launch. Study the map as there are even more ways to get turned around on the paths and trails. It is so nice not to have to worry about car parking when kayaking by bike. “Front row parking every time” is so true as we unload our kayak on the grass right next to the boat launch. There are no bike racks, but there are many poles/trees to lock to. I also lock the trailer to the bike.

Once on the water we started searching for sunbathing turtles with no luck. Bringing litter pickers along we usually find a few pieces of garbage, this gives the kid something to look for and do. Hugging the shoreline provides some shade but the mid-day solar radiation can get intense! Two miles of paddling and the kid is usually done. It was time to get out of the water and hit the playground on the way home. Advantages that Cook Park has over many parks are lots of trees for shade, many bathrooms, large picnic shelters and public power for e-bike charging.

Related: Get on the water by bike at one of these pedal-to-paddle destinations

We took Hall Blvd home as I contemplated stopping for groceries. Could I find kayak parking at Fred Meyer? Would the bike be safe if I took two car parking spots and locked it to itself? The wave racks would be even less useful with this long load. Thinking that I better not chance it, we took the kayak home and went grocery shopping later. Although now that I think about it, we probably could fit a lot of ice cream in the kayak!

Thanks for reading along on our adventure! 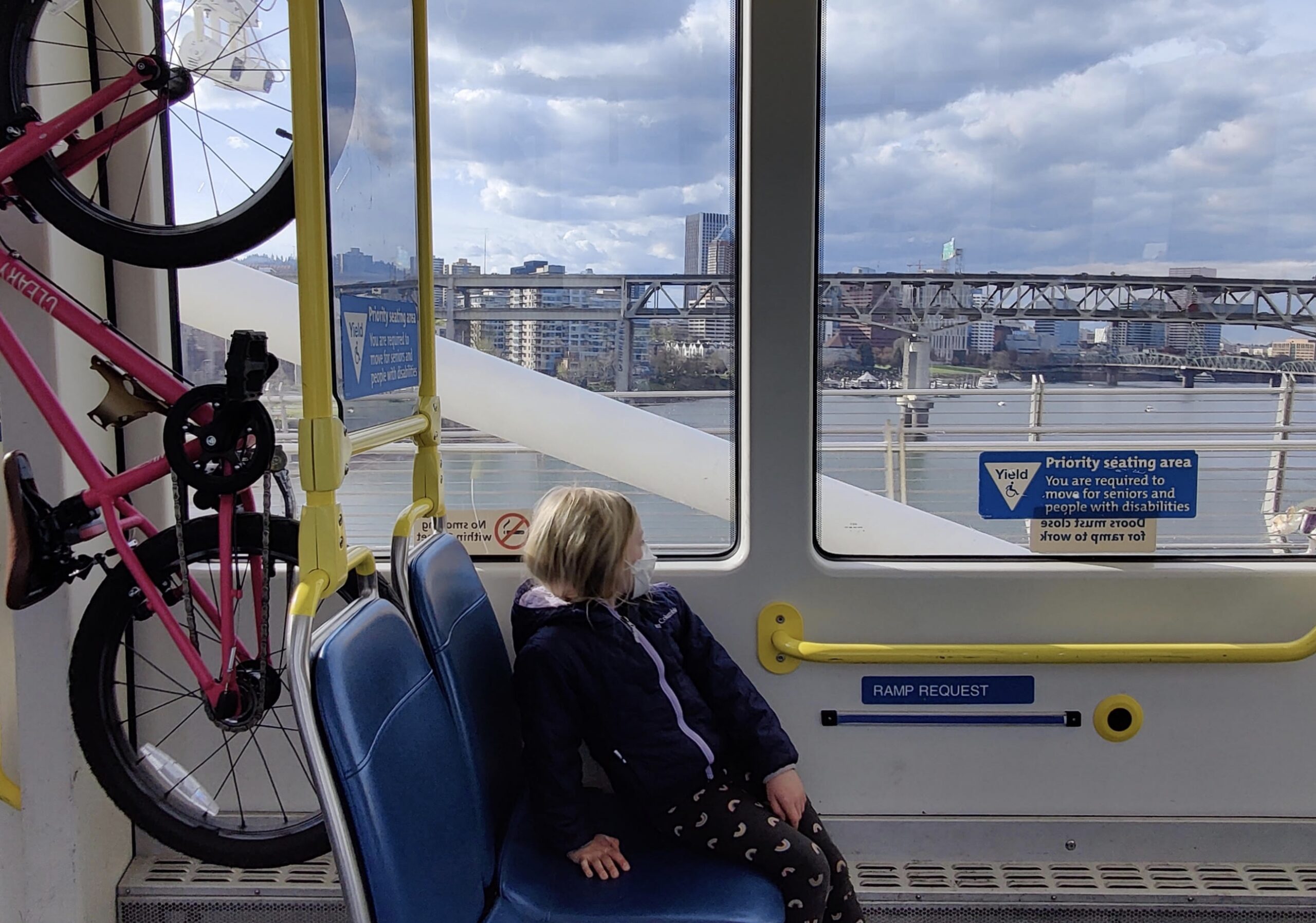 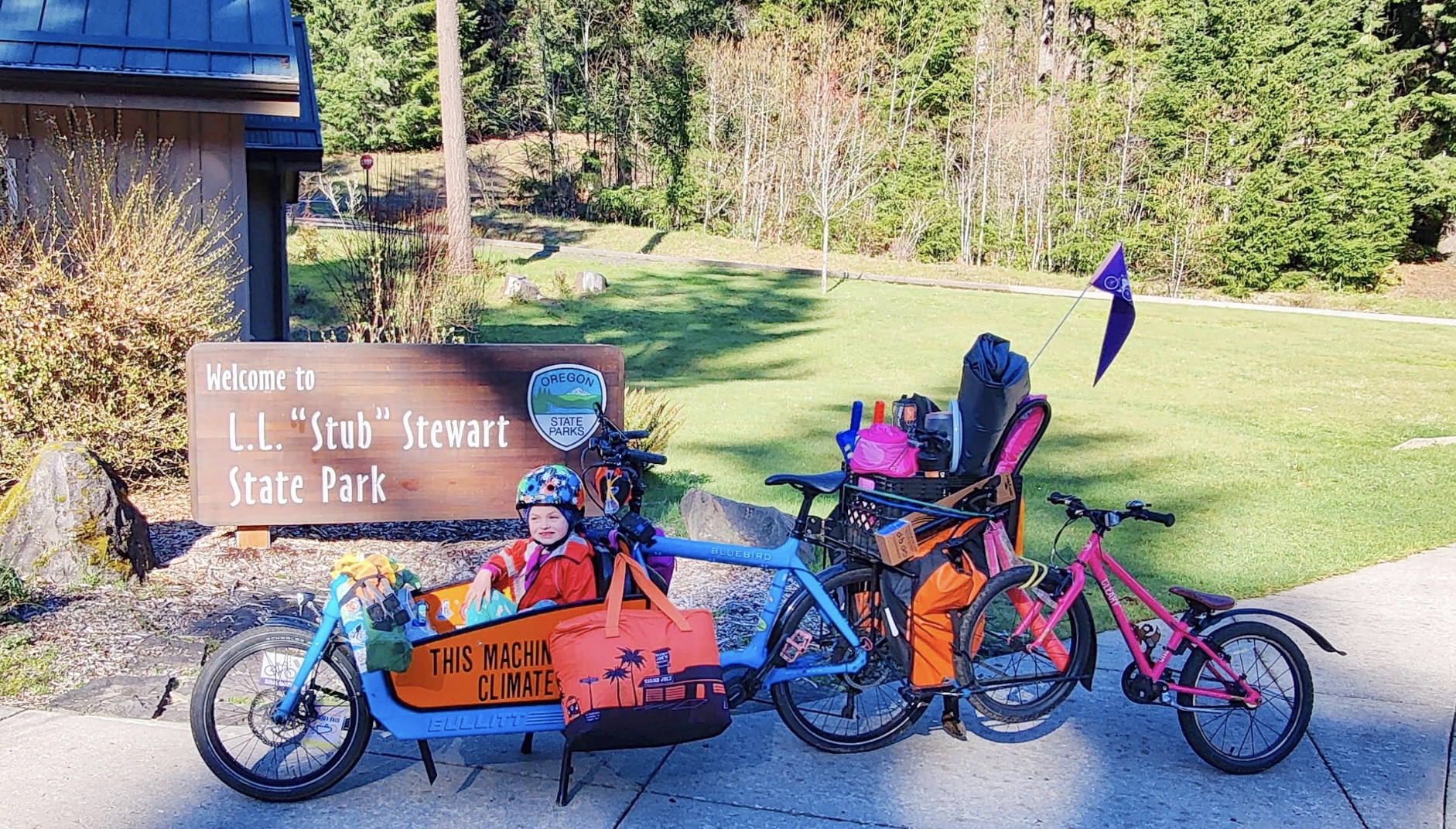 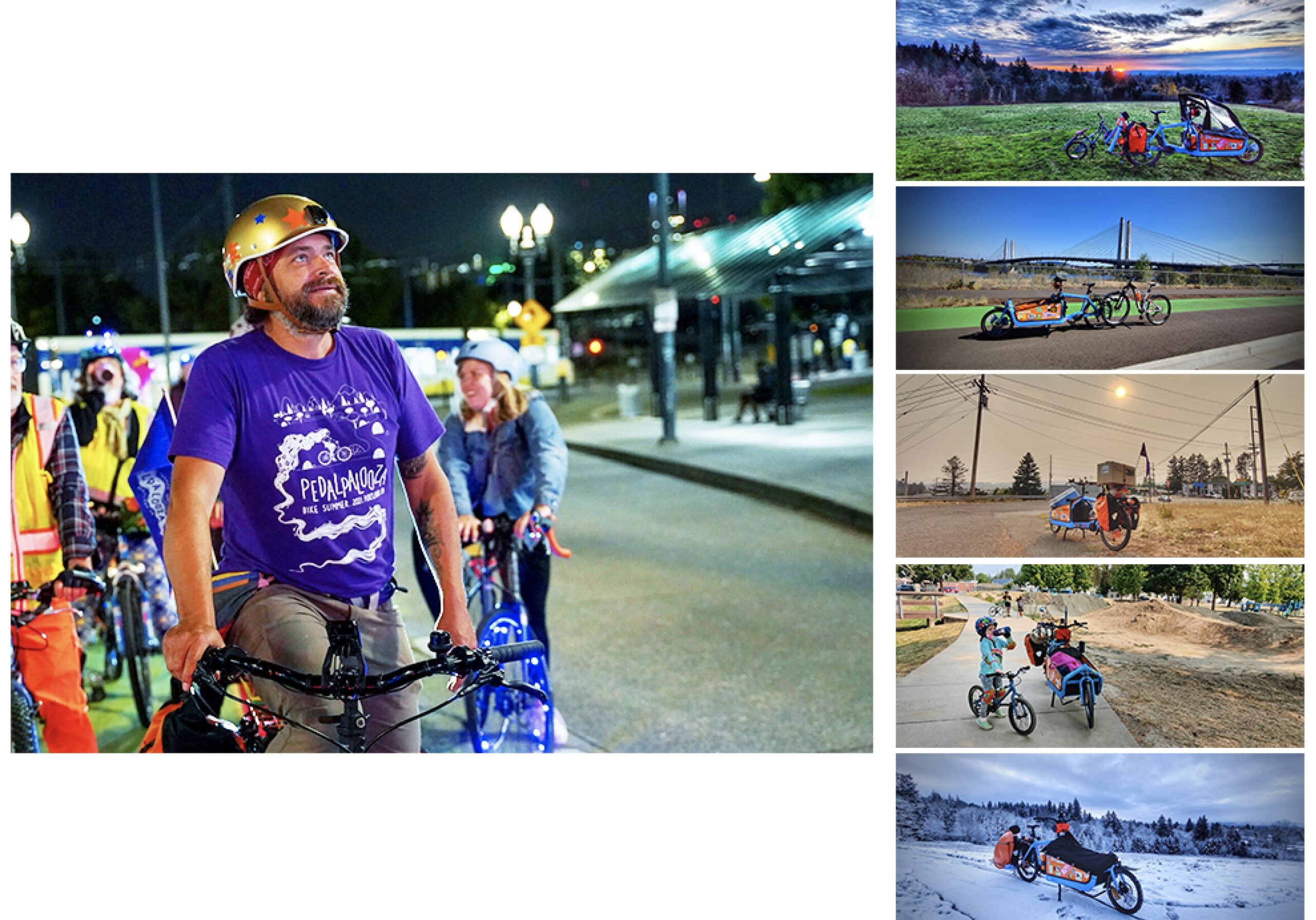 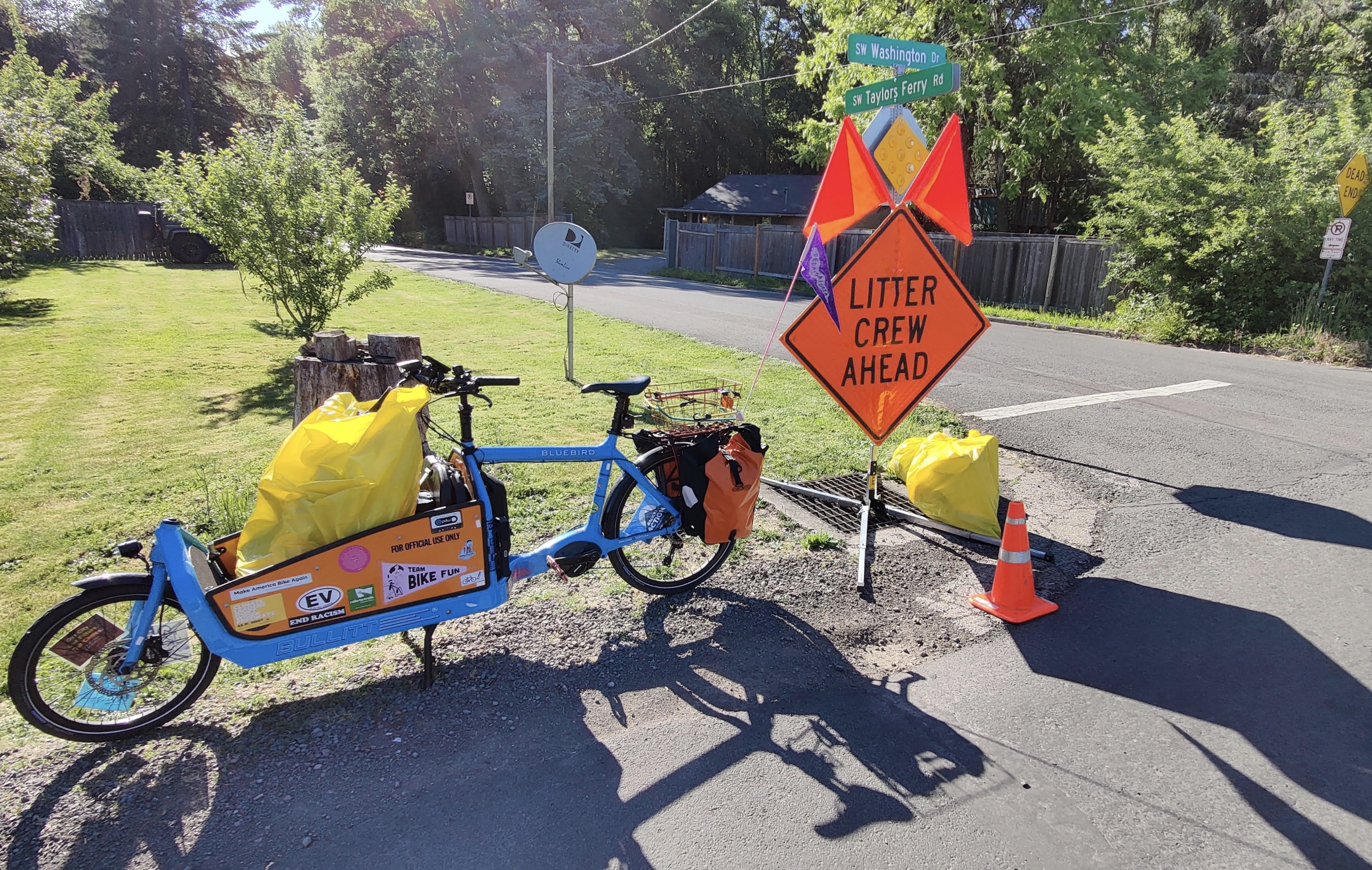 Turns out, you don’t need a big truck to Adopt-A-Road. (Photos: Shawne Martinez) 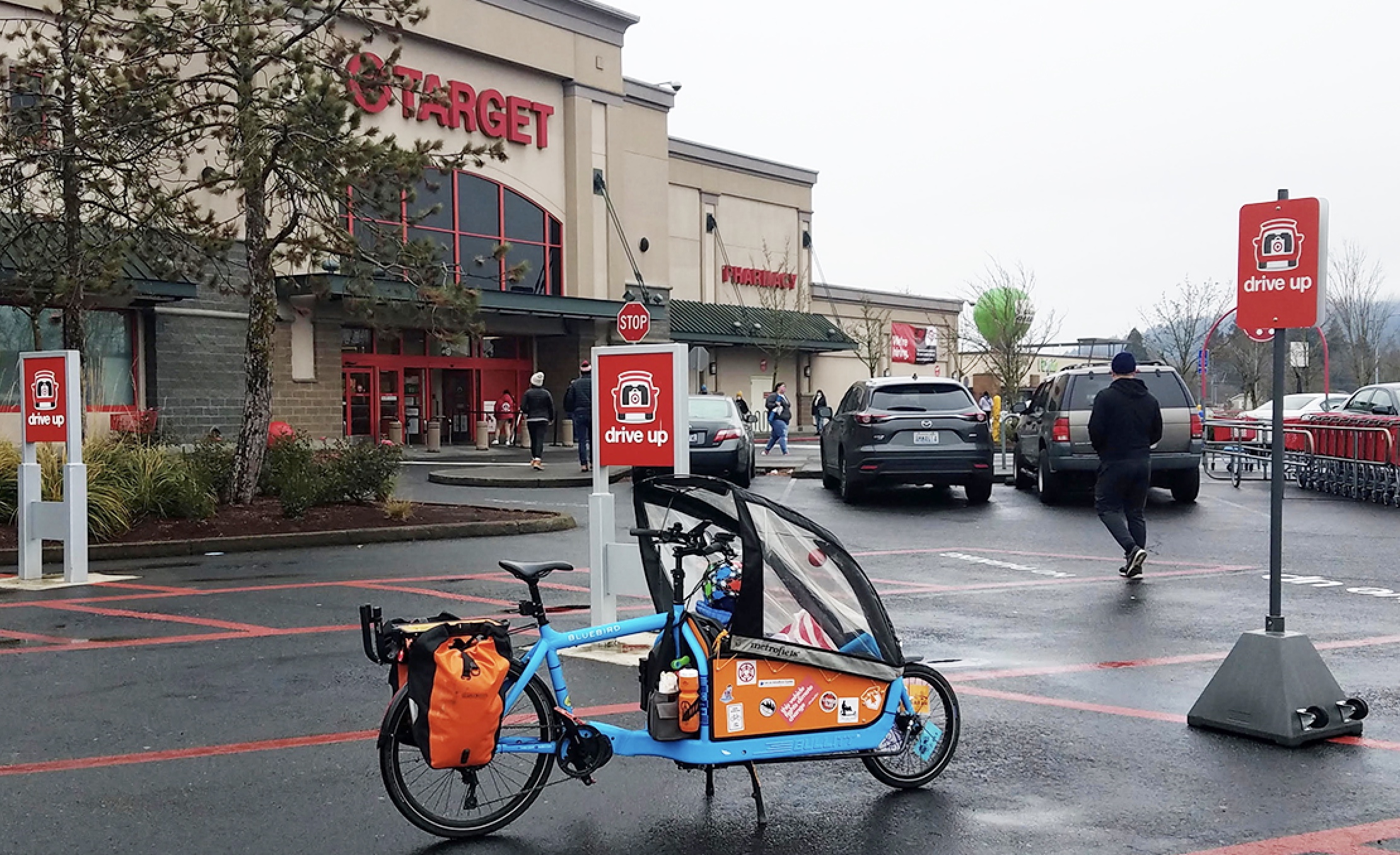 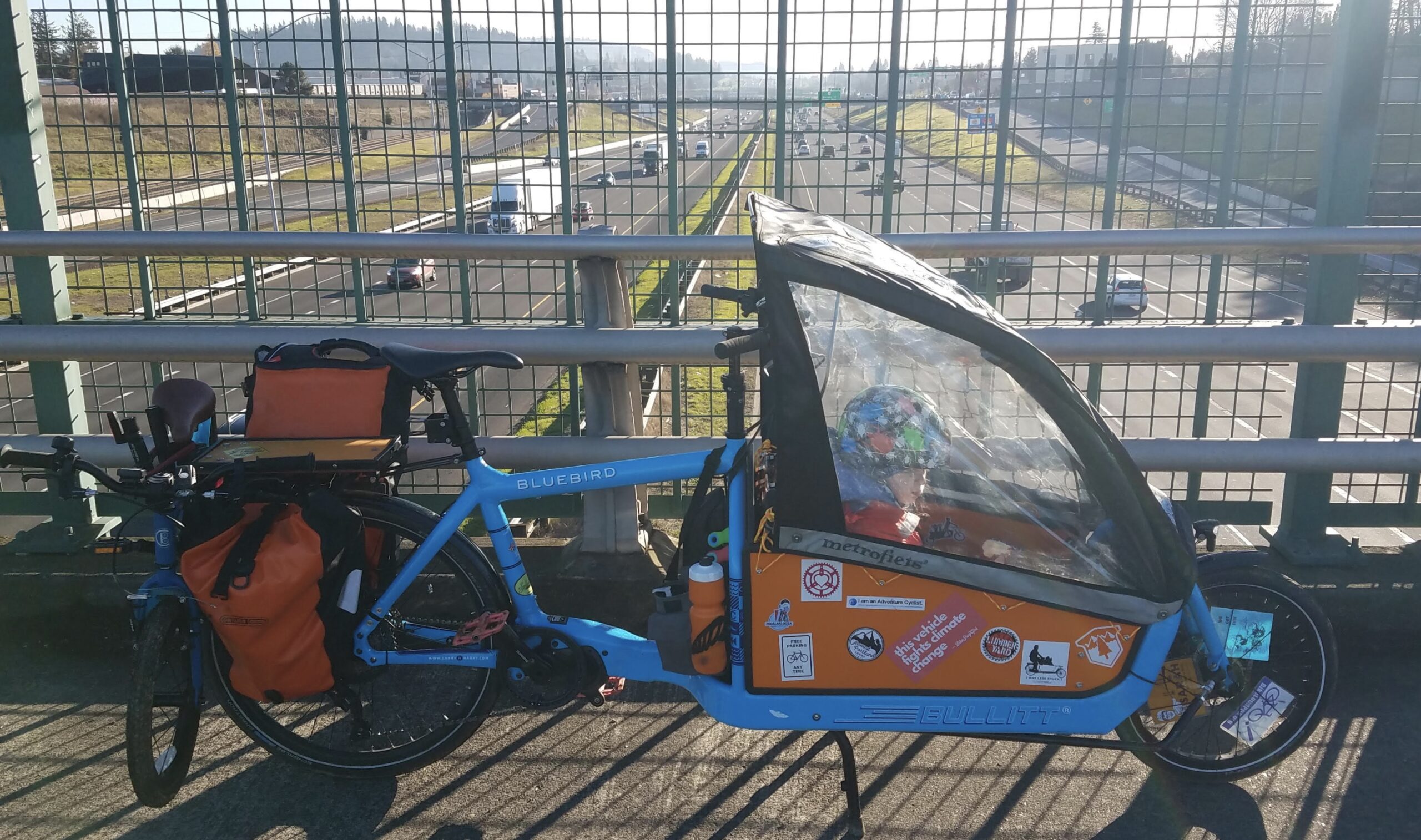