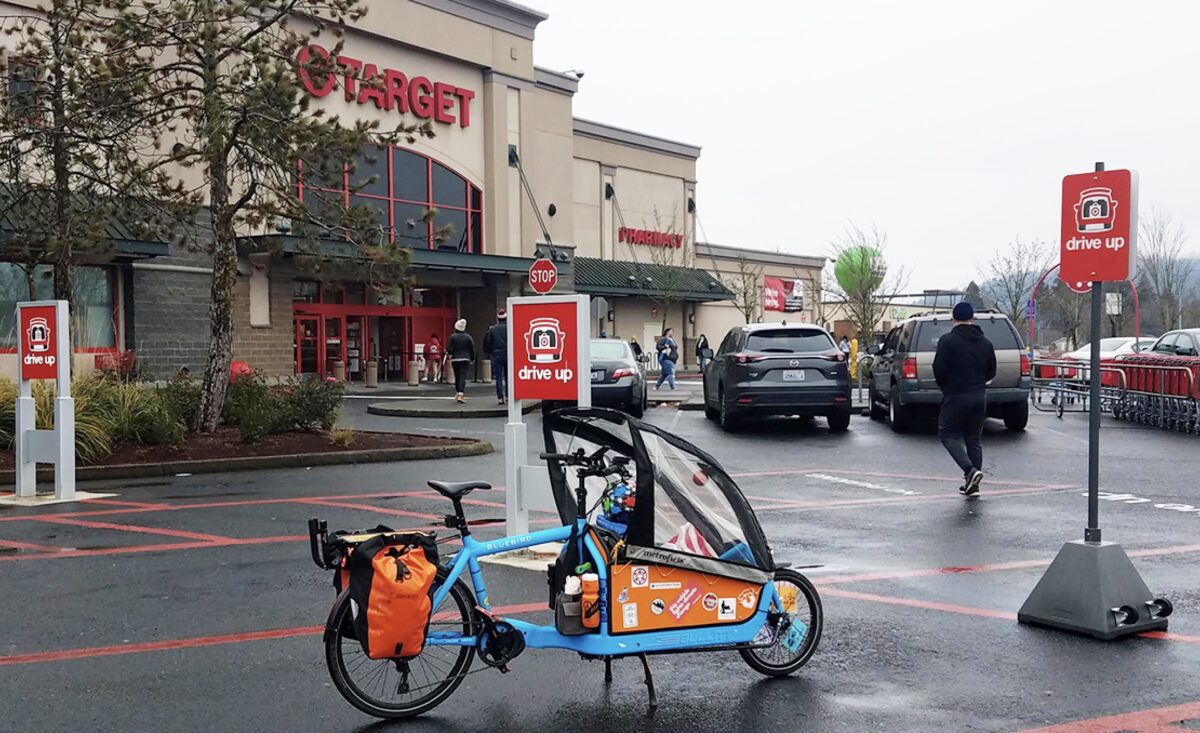 The employee said they had never delivered to someone on a bicycle.
(Photos: Shawne Martinez)

(Publisher’s note: We all had so much fun followings Shawne’s 40-mile trip to Gateway Green earlier this month that he’s come back to share another adventure. This story also gives us a chance to share more about how customer pick-up from stores works on a bike — an issue I’ve been curious about since so many stores now offer this parking-lot service often oriented only toward car users.)

I was so close to talking myself out of riding. It was foggy and rainy. I already had two big rides in the past week. I hadn’t slept well the night before. But we’d found a specific item available locally only at Target. The Mall 205 Target that is, a whopping 16 miles away. (I looked at several locally owned stores for the product but no luck.) I could drive; but I’d feel guilty if I did that just to pick up one thing. But what if I combined errands? What else could I do to justify driving? Nothing. OK. E-bike to the rescue!

I looked up public transit options. No weekend bus service on Line 43 means riding to Barbur Transit Center and leaving the bike there. (No way). We could walk to Pacific Highway and catch the 12. Meh.

Ok let’s ride the e-cargo bike but leave the kid’s bike at home this time (shedding 16 pounds makes a big difference). I attached the rain canopy, packed a lunch, and off we went. 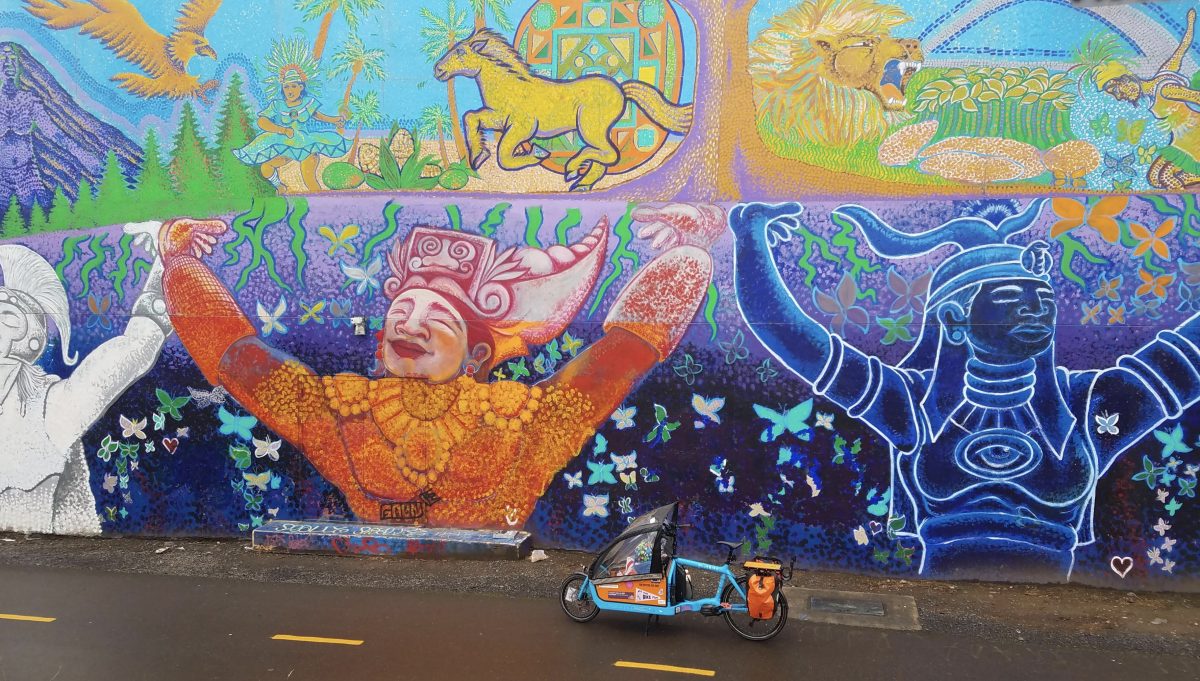 The Boys & Girls Club mural along the way on I-205 path at SE Harold.

The drizzle stopped just before we left. I decided to make a change to our route to eliminate one hill. This would be a second chance at the trip we took to Gateway Green last week. Maybe we could make it on one charge! 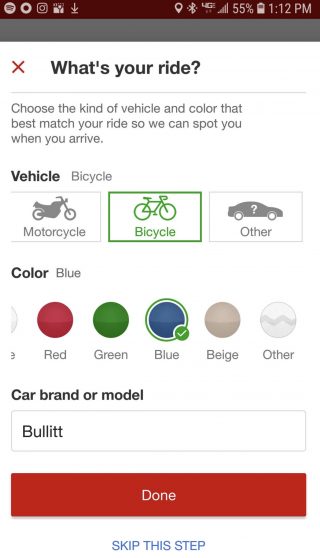 To my surprise, “Bicycle” was an option in the app.

Before we left the house, I downloaded the Target app as it would be required for bike-up service. When our order was ready it asked me to click if we were on our way. (I didn’t want to do this at home as we had a 1.5 hour ride ahead of us.) I had to change the pickup option from walk-up to drive-up. Surprisingly there was an option for “Bicycle” when asked what kind of vehicle we were in! I waited until we were about 10 minutes away to click “on our way”.

As we rode up there was a long line outside. Customers were waiting to enter the store. Just past them was a canopy/tent at the curb with an “Order Pickup” sign. Was I supposed to pull up there? (Truly curbside.) Then I spotted the dedicated drive-up parking spaces trimmed in red paint. Yes! We coasted into the huge parking spot. I opened the app and clicked that we had arrived. I figured this would take a while so I dropped the kickstand, dismounted and took my gloves off. I turned around and there was an employee walking my way! The employee said they had never delivered to someone on a bicycle before. I told them that this was a first time as well. I showed them a number that the app presented in large text and that was it. Super easy and fast!

The ride home made a total of 34 miles and 1,900′ of elevation for the trip. (This was 5 miles and a couple hundred feet shy of the Gateway Green trip.) We made it on one charge Barely. Display showed zero range when we got home. Success!

—Shawne Martinez, @RescueEwe on Twitter.
— Get our headlines delivered to your inbox.
— Support this independent community media outlet with a one-time contribution or monthly subscription.

Shawne is a prolific urban rider who has put thousands of miles on his e-cargo bike, often with his young daughter in tow. He lives on Portland’s southern border with Tigard and is a member of the City of Tigard Transportation Advisory Committee. Follow his adventures on Twitter @RescueEwe

Sounds much less dramatic than your previous adventure.

I’ve done a Target pick-up on my e-bike as well. Similar distance, but considerably flatter. No issues with the bike or from Target staff.

Thanks for sharing this Shawne. I know other folks haven’t had such a nice experience doing curbside pickups by bike. I recently did a bike pickup from Best Buy in Jantzen Beach and found it amusing that their app (same one as Target uses it seems) didn’t have the “Bicycle” option.

I’m surprised any of them do. Bikes probably aren’t even 0.1% of traffic out there, and you use your bike like a car, it effectively is one.

Not many people are willing to spend a huge chunk of their day picking up something up in cold rain– that’s why delivery exists.

I did a Lowes pickup on my bike but the web check-in was buggy and nobody picked up the phone (I didn’t have the app). Instead, I just rolled my bike into the entryway and used the walk-up window where you’d normally get a shopping cart. Somewhat anti-climactic.

I saw people waiting in line *inside* the Tigard Lowe’s for curbside pickup. Is this still happening? I may have to try it.

inside? augh!
I go to the Lowes by Delta Park and there’s not enough room for a line to really build up there. There’s definitely visual guidance to form a line but with distancing and the flow of traffic into the store, only 1-2 people could be in line at a time.

I like the fact that your bike is Gulf Blue and PMS172 Orange. Reminiscent of an earlier era.

I wanted higher visibility but also something different. I’m happy with the colors!

Hi all! We did learn a valuable lesson on our 2nd Target pick up. Don’t go until you get the “ready for pickup” message. We arrived at the Tigard Target 5 minutes ahead of the 2 hour ETA only to get an “Out of Stock” message a few minutes later.

What was your route to the 205 MUP?
Great pic of the mural.
That’s my Target. Good info, fun article.
So, are charging stations part of the new bike infrastructure considerations?

I take different routes just to keep things interesting. We came down Terwilliger, crossed the Tilikum and took SE Clinton to 205. On the way back we took 205 to Springwater and crossed on the Sellwood.
I am trying to get more people thinking about charging stations. Especially those already involved in EV charging stations for cars.

Clinton doesn’t connect to the 205 MUP. I should have asked what you’re route was from Clinton to 205. Division?

Great rides. Very inspiring. How do you keep your kid occupied on these long rides? When my kids were younger I took them lots of places in a bike trailer and then a trail-a-bike (one of those tag along half bike attachments). The kids enjoyed these rides as long as they didn’t last more than 45 minutes. After that they could make the ride unbearable. What’s your secret?

Library books, boombox and lunch. The Bullitt kid seat is very comfortable. Lots of adjustment. Letting the kid pick the music is huge but I have to change it up sometimes.

It looks like you should really invest in an extra battery. Remember that the battery getting you to these places today won’t be up to the task in several years. The good news is that batteries continue to get better and cheaper so the future looks bright.

I too like the color scheme on your bike. Happy travels.

Agreed. I hope to add a battery at some point. Thanks!

I enjoy your e-bike adventures. Thanks for sharing.