We shared the news in this week’s Monday Roundup that Levi’s has just launched some new fits, including a line for women, of their Commuter brand jeans. The jeans are designed for bike transportation with high-rise waists, skinny legs and slightly reflective seams.

And befitting a clothing line that’s built for everyday riding, the video they launched today bursts through a dozen dull stereotypes about both biking and about marketing women’s bike products. 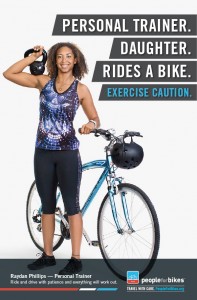 A series of posters has been launched and they’ll soon be appearing on billboards and other locations nationwide.

The campaign was modeled on the “Drive With Care” campaign launched (via a successful crowd-funding effort) by the non-profit Bike Pittsburgh this past spring.

The visuals include portraits of everyday people and their bikes, along with some clever taglines. For instance a chef’s posters reads: “Chef. Neighbor. Rides a bike. Don’t cut it close.”

A creative bicycling promotion campaign in Malmo, Sweden is worth our attention. According to Copenhagenize, the campaign has been “a massive success” over the past several years.

It would be very exciting if we had a similar effort going on here in Portland. Check out the excellent video below to learn more about it…

No ridiculous car trips from Martin Lang on Vimeo.