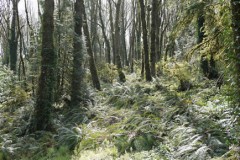 River View Forest will soon be
owned by the City.
(Photo: City of Portland)

Calling it the “largest land acquisition in recent decades,” two City bureaus (Parks and Environmental Services) teamed up with Metro to purchase 146 acres of natural area known as the “River View Forest” in Southwest Portland. The $11.25 million deal was announced Monday and was approved by City Council yesterday.

The privately owned land, which is adjacent to and south of River View Cemetery off of SW Macadam Ave, is currently home to a large network of unofficial bike trails that have been ridden for many years. Once the City of Portland becomes the official land-owner (which should be finalized later this summer), what does the future hold for mountain bike access?