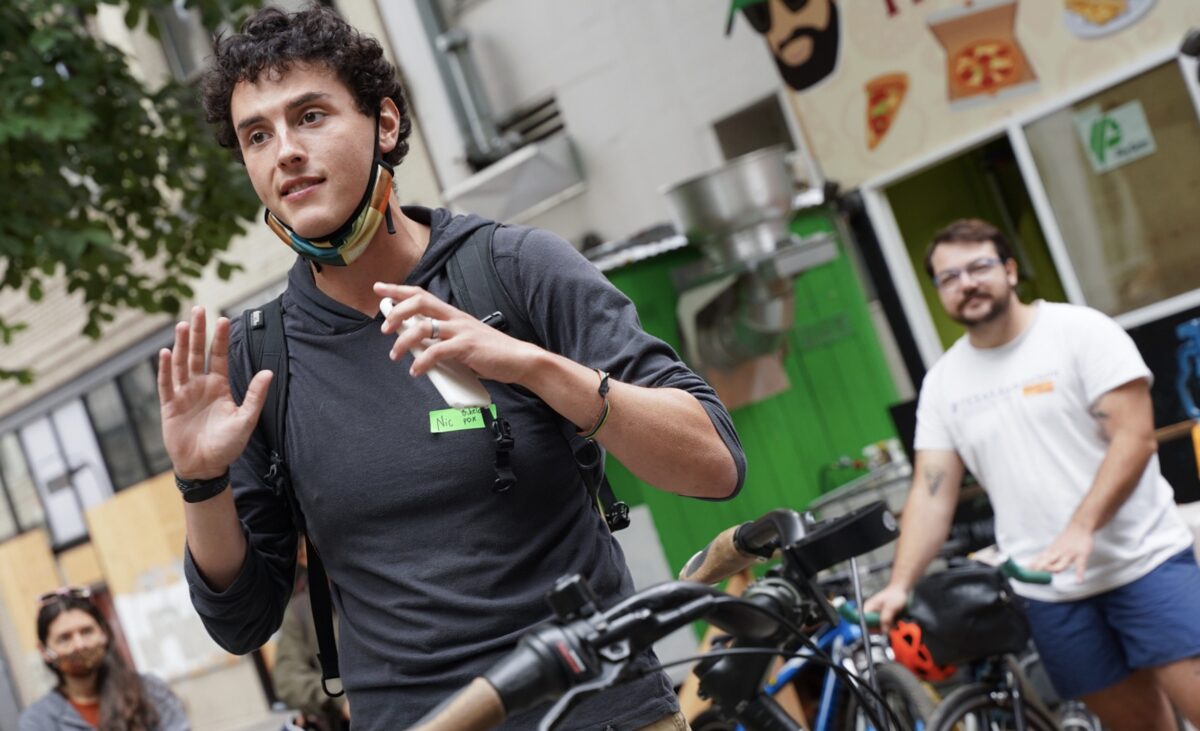 “We’re in a place where we see that our city has failed us.”
– Nic Cota, BikeLoud PDX

People in the Portland bike advocacy scene are sometimes known for making vague threats to sue the city for this or that transgression. These warnings are often made in jest, without serious plans to follow through. For more than a year, however, board members of BikeLoud PDX have been completely sincere about this issue, and we ultimately decided to take legal action against the City of Portland for failing to meet the requirements of the Oregon Bike Bill.

This decision to sue the City of Portland did not come lightly to a single member of the BikeLoud board. As a cautious person, I was among the most hesitant of the group. When it came my time to vote on the motion to sue last November, I froze. It was a major decision that would determine the entire future of this organization and potentially transportation throughout the entire state.

I had many concerns, ranging from the security of my job as a civil engineer, to BikeLoud’s relatively scant resources. But the biggest discomfort for me was the fear I would jeopardize the relationships I’ve built. Usually, I don’t lambast city employees or elected officials, who are often our biggest supporters as we push for safer streets and multimodal access.  After all, these staffers come on rides, they talk about visions for the city, they agree that our streets are too dangerous. They dream the same dream. Was it worth potentially unraveling those relationships?

But I had to ask: given all the passion from so many city staffers, why has there been such a lack of action? Where are the bike lanes the city claims to want to build in their plans? Where are all these people on bikes? Where’s that 25% of trips made by bike we are supposed to get to in seven years?

As I thought about my vote, I thought about where we’re going wrong in Portland. My cynical first reaction was that maybe, instead of pushing the status quo, too many Portlanders have quietly fallen back in love with the comfort of it all. Cars are convenient, cars are freedom, cars are ubiquitous: we’ve gotten complacent. We’ve accepted our fate that we all should afford cars, insurance, gas, and just crank the AC a little higher when the next heat dome comes.

My second reaction is that maybe people just don’t know how good it is here. Much of our city is easily accessible by biking and walking, unlike the suburbs and exurbs where many of Portland’s transplants come from. This new generation of Portlanders just doesn’t know how unique this city is. And since our biggest additions to bike infrastructure in recent years have been neighborhood greenways, much of our infrastructure is hidden to the vast majority of potential new riders.

My central dilemma about the lawsuit came down to the classic chicken-or-the-egg problem: Do we need a bike-supporting populace that’s willing to prioritize bikes, walking, and transit? Or does the infrastructure need to come first in order to support that populace in the first place?

After a lot of growth, a lot of listening, and a lot of time biking: I think we need to start prodding the egg to hatch. We’re in a place where we see that our city has failed us.

So, in the end, I voted yes, and the board unanimously agreed to be the plaintiff in a suit against the very city we live in. And a year later, I can confidently say: we’re ready. The time to demand better bike infrastructure is now, for the sake of our future as a sustainable and equitable city. And we have the law on our side. There is no Oregon law that mandates cities to maintain a flow of cars driving on our streets and dedicate space for them to park wherever they like. There is, however, a law that requires planners give bike and pedestrian infrastructure their due: the 1971 Oregon Bike Bill.

What this lawsuit determines will impact not just Portlanders, but people who live throughout the state of Oregon. The roads we are building now will one day be used by our kids and grandkids, and they should reflect the urgent need to change our habits to meet Oregon’s climate goals.

Imagine a future where your kids can easily opt to ride a bike or an e-bike within and between any destination in Oregon and get there safely, comfortably, and with dedicated space for all ages and abilities. I’d like to think that’s what the writers of the Bicycle Bill intended, and I hope the courts will see it that way, too.

If you believe holding the city accountable is a right step, you can help us by making a donation to BikeLoud so we can finally get off the ground with a paid staff member in the near future.

BikeLoud is a grassroots organization that stays active through monthly rides and meetups that are free and open to all. We help elevate policy like the new e-bike legislation, we collaborate with other nonprofits, and we do as much as possible to get more people involved with biking (for instance, with our brand new ‘Bike Buddy’ program). And there’s more we could do to get Portland to a 25% bike mode share by 2030 — but we need your help. We need all the help we can get to get folks out of their cars and onto a bike of their own.

Guest opinions do not necessarily reflect the position of BikePortland. Our goal is to amplify community voices. If you have something to share and want us to share it on our platform, contact Publisher & Editor Jonathan Maus at maus.jonathan@gmail.com.

Thank you Nic for the thoughtful article. Let’s get more people safely on bikes!!

Thanks! I’m really proud of the work we are doing with BL. Although I believe the Street Trust left a void in advocacy that needs to be filled, the work they are doing now is still so crucial in reaching new Portlanders and creating connections to other communities and voices that are often left out.

We all need to be advocates for getting other Portlanders to bike, and I feel like BL has stepped in to support folks who do bike or are interested and empower those people to become advocates in their own right.

“There is no Oregon law that mandates cities to maintain a flow of cars driving on our streets and dedicate space for them to park wherever they like.” Love it. So proud of you guys. Bikeloud has come a long way. This lawsuit is a long time coming.

Nic, thank you for writing this! #BikeLove ♥️

Keep connecting with a diverse community, keeping the mission of the organization in mind, and having courage when necessary! 🙂