Skip to content
(Images of Tuesday’s press event in Woodburn provided by ODOT. Click for full image and captions.)

“Community feedback has influenced our thinking and direction around e-bikes.”
— Matt Noble, ODOT

At a press event Tuesday, Oregon Governor Kate Brown spoke about her commitment to climate change while standing in front of a new EV charging station in Woodburn. The occasion was to mark a milestone in Oregon’s efforts to build out its portion of the West Coast Electric Highway — a network of charging stations between Canada and Mexico that aims to relieve range anxiety and further bolster the switch to electric transportation.

As loyal readers of this website know, conversations around EV charging are almost exclusively about electric cars. But this event was different. In fact, in video of the event, I couldn’t even see a car in the frame. I could however, make out a different type of vehicle parked next to Governor Brown: a bicycle.

Why? Because all 44 Electric Highway charging stations currently open in Oregon have been outfitted with a 110 volt outlet to provide free charging for electric bike (and other type of EV) users! ODOT has heard our pleas and they’ve responded! 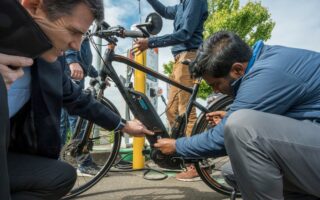 The chargers are installed along I-5, I-84, U.S. 101, and a few other highways. Once the final phase of the Electric Highway is completed in Oregon later this fall, there will be a total of 47 stations available — and all of them will include an outlet for e-bikes. (Find station locations here.)

EV advocacy group Forth provided the bike for Tuesday’s event.

ODOT’s share of this project will be $4 million when all is said and done — just one part of the state’s $100 million commitment to EV charging infrastructure. When we reported on that investment two weeks ago we hinted that ODOT had plans to address e-bike charging needs, but we weren’t aware they included all stations along the Electric Highway.

The agency has come a long way since December 2020 when we first raised a red flag that their transportation electrification plans were too heavily tilted toward cars and seemed to leave out bikes altogether.

Currently, e-bike users like our columnist Shawne Martinez, have to either search for publicly-accessible outlets in businesses and other public spaces during long rides, or buy a special adaptor that can be used at standard car-charging stations.

These upgrades to include a bike outlet are a relatively small but very significant sign of progress that begins to level the playing field for car and bike users.

ODOT spokesperson Matt Noble confirmed with us today it was much more likely to happen because our community spoke up. “Community feedback has influenced our thinking and direction around e-bikes. Whether that’s through reporting like yours or through direct engagement like our recent TEINA study.”

Noble also shared that because e-bikes and micromobility vehicles were already on ODOT’s radar, it made this upgrade to chargers by their private contractor EVCS possible. “When we were negotiating the details of the upgrades,” Noble said. “The idea to add the 110 volt charging for e-bikes was a no-brainer and something we both supported. EVCS took the extra step to provide it for free.”

Thanks for listening ODOT! We hope future EV charging projects continue to include the needs of electric bike (and scooter and skateboard and other types of small, low-impact EV) users!

One small correction-the $4M for these upgrades was provided in 2019 after a substantial effort in the Legislature by Forth, ODOT and others, so it’s not part of the upcoming $100M. These projects definitely take time….

Kudos to Bike Portland and e-bike advocates (lookin’ at you, Shawne) for making sure ODOT makes this ‘relatively small but very significant’ step; hope it’s only the first on the path toward reducing folks’ car dependence.

Yay! I feel more validated by ODoT! And thanks FORTH too.

[This picks up where other EU DOTs like Germany’s started doing in the early 2000s…for eBike access to recreational routes.]

So ODOT reacted because the community asked them to?
Can they please just pick up the trash all over the freeways.
Baby steps….

A possibly better design I have seen in Germany at a museum: A row of small lockers with an outlet inside, next to a bike rack. So you lock up your bike, put your charger and battery into the locker, and charge while you visit the museum.

These outlets are a start. But what needs to happen is for manufactures to standardize charging on e-bikes, etc. On a long trip, I don’t want to have to carry that many pound charging brick. With e-cars there are standards for charging. Currently the most used is CCS (except Tesla). If you could charge directly with DC power from a E-Bike charging station, it would be a little faster and you would not need the charging brick.

Hear, hear. Carrying the charging brick really is a pain.

You’re not wrong about this, but there’s no incentive for manufacturers to standardize. In fact it’s the other way ’round. If Bosch motors use Bosch batteries and Bosch chargers, they’ve got you in vendor lock-in and they sell more products.

One of the reasons cars were standardized is that it’s easy to fit the voltage hardware under the hood, as it were. For ebike riders, the extra 5-8lbs of DC convertor gear would certainly be noticed. Now if they built the variable bench power supply into the charging post, that’d be huge progress. Downside is if you do it wrong you might fry your battery. 🙂

Did you have a nice ride to Woodburn? Wish you had taken an e-bike (maybe Portland to Woodburn is beyond an e-bike’s range?) and re-charged it in Woodburn.

And you can ride your bike there on I-5. Oregon Department of Freeways is so rad!

yeah, I was excited until I realized they put them in places I can’t go.

So, I made this point in the last ebike post but I’ll rehash it a bit. The use case here is you land at the charging station, plug in, go about your business be it shopping, taking a break, having a picnic. Because of the AC to DC conversion, if you want truly fast charging you’re going to need to bring a huge high voltage bench power supply. Which by the way, is expensive and you’ll never be able to secure it. And if you decide to sit by your bike because there’s no way to lock it within range of the outlet, you don’t even have a bench to set on.

I like that they put 110 outlets along freeways I can’t ride on but this is, unfortunately, a marketing event without any real consequences for those of us out there riding.

i totally hear you on this Andrew and I agree to some extent. It’s a first step and it shows they have heard concerns and did something to address them. We need to push for more but I think that this puts bikes on a new footing.

I just browsed the map, and every single one of the 47 chargers is along a 55+ MPH highway. Thanks for thinking of me, but I’m never going to use any of them.

keep in mind the stations are not directly on those highways. they’ll be on frontage roads, adjacent parking lots, and so on. Not ideal at all of course for biking, but it’s not accurate to say the stations are “on highways”

If the 110V outlet is a standard plug, anybody who wants power for anything can plug into it. It’s not specific to bikes (which are not standardized as people have noted).

If chargers include a step-down to 12 volts, is there a 12 volt standard connector that bike riders can easily plug their charger into using an aftermarket device that’s lighter than a brick? Since I don’t have an ebike I’m not really up to speed on this.

I will start to believe that Oregon is Serious About Bikes when there’s a grade seperated limited access network of routes for bikes engineered by people who ride bikes* that crosses the state in every direction. Is that too big an ask? Maybe. We did it for cars and the cost of doing it for bikes would be a minor fraction.

Now lower the age to 14. At 16, my kid gets a car. He can already pedal faster than these things go for short periods of time. He knows how to handle it. What a great “in-between” vehicle this can be for someone venturing into commuting to school.