The Portland Bureau of Transportation has been working on reconfiguring the intersection at Southeast Lincoln-Harrison and 30th in the Richmond neighborhood for some time. We took a closer look at this project back in January, and since then, PBOT has done something local advocates have pushed strongly for: They have replaced “paint-and-post” with concrete islands and curbs!

As you can see, it looks a lot cleaner. Save for a bit of construction still in progress on the east side of 30th Ave south of Lincoln Street, the project is effectively complete. So, what’s the verdict thus far?

As a Richmond resident, I bike through this intersection regularly, and I’m usually in good company: the Lincoln-Harrison greenway is an important east-west bikeway in southeast Portland in between busy Hawthorne Blvd and Division St.

When I went over to check out the specs of the updated intersection, I saw several other people biking through the new infrastructure. One person who stopped to talk to me while he was biking with his dog said he doesn’t feel much beyond “meh” about the updates.

He said he and his dog ride this route almost every day, but he hasn’t noticed a substantial change here as far as his ease of his experience. Nonetheless, he said he appreciates that PBOT pays attention to small details like this, because in certain cases, he’s seen them make a big difference.

The reason for this project was to address the wide expanse of pavement created by the offset intersection where Lincoln becomes Harrison going west — which was too wide to be safe for people biking, walking or otherwise rolling through, especially considering the volume of car traffic on 30th. PBOT has planned to make improvements to the greenway since 2017 after identifying it as one of the worst-performing greenways in the city because of its stretches of high car volume and speeds.

Now, thanks to new swaths of new paved medians and other features, the crossing at 30th is much tighter than it used to be and as a result people can’t drive as fast. And as we pointed out in January, since people driving cars can’t travel east onto Lincoln from Harrison, traffic is much calmer.

PBOT traffic data shared in fall 2019 showed that their calming methods at this intersection had been a “significant success” with a whopping 41% decrease in average daily traffic (ADT) at Lincoln and 30th.

The larger context here is what this project illustrates about PBOT’s approach to defending neighborhood greenways from car users. First they identified the problem, then they brought potential solutions to the neighborhood, then they tweaked their plan based on public feedback (the initial plan called for only a few sharrows!), then they installed the temporary plastic posts, then they added paintings in partnership with the neighborhood, and now they’ve finished it off with a high-quality, permanent treatment.

Thanks PBOT. Now let’s replicate this approach and implementation at thousands of intersections citywide!

[Jonathan Maus contributed to this story.]

[This is our sixteenth story (!) about PBOT’s efforts to tame traffic on the Lincoln-Harrison neighborhood greenway. Browse the archives to learn more.]

I use this intersection every 2 days, and welcome the improvements. They are well done, and have calmed traffic considerably. Ped crossing is much safer now, too. Before, that crossing was the wild-west. Thank you pbot (and bikeportland for reporting on this).

Wonderful! I didn’t realize this was coming and when we last biked through the intersection I commented to my wife that, despite loving the traffic changes, the plastic bollards and paint were so ugly and unnappealing. This is so much nicer.

They’ve really improved this whole stretch since 2017. Some of the worst passes I’ve had were heading uphill on Harrison and Lincoln especially east of 50th. Since the diversion I haven’t had a single issue.

I can’t wait till they install more of those permanent slow street planters so many of my routes are slated to have them. It’s been almost a year since they announced it and I haven’t seen any progress I wonder what the hold up is. The daylighting they’ve done recently has made a noticeable difference on greenways.

Why is pbot putting sharp curb ends along ramps all over the city all of a sudden? I thought the idea was to increase access for users, not create tripping/rolling hazards. I first noticed it on the eastward division improvements a few months ago.

A comparison can be found at: https://imgur.com/a/iJUFvtQ

I think this done to improve navigation for people using a white cane.

I’d like to think it’s that simple but here’s what they did to a bike lane, not a walking area, on Division: 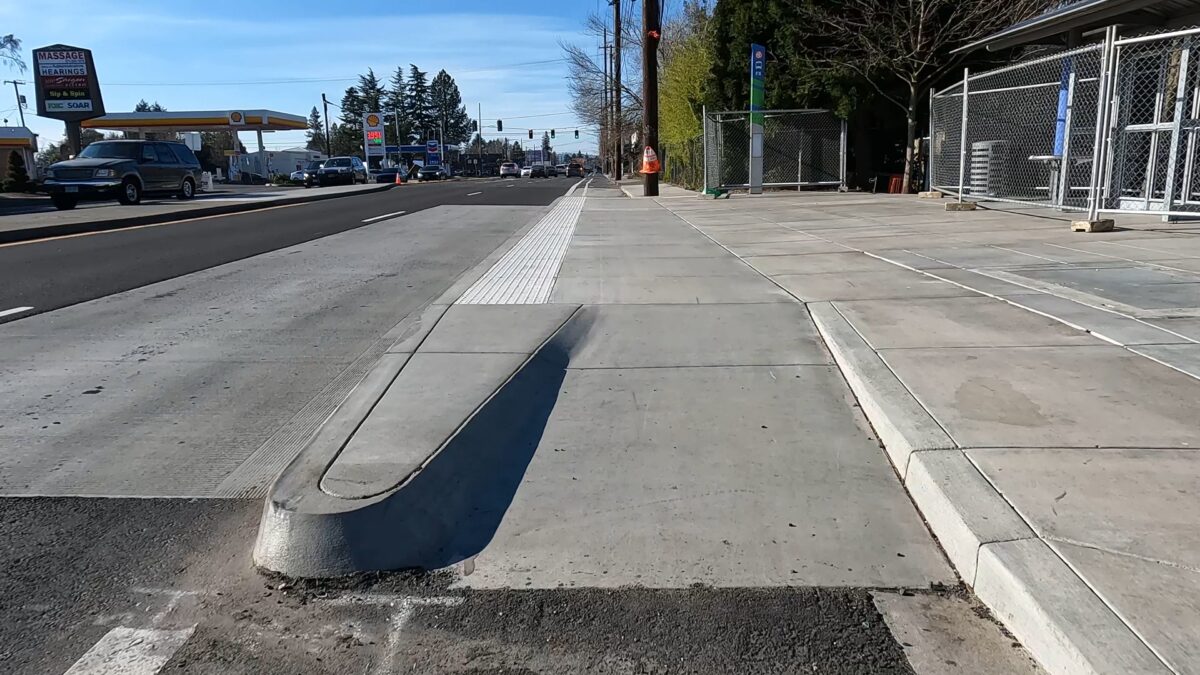 Chris I
Reply to  Andrew Kreps

The design shown above would be much more effective at keeping drivers from mounting the curb. If you eliminated the sharp curb, it would basically act as a driveway leading cars up to the bus platform.

When there’s an adjacent walking surface (like paved sidewalk), then they must do a gradual transition. Where there’s a vegetated planting strip (where theoretically no-one is walking), or other non-sidewalk construction, then they can do a “curb” edge.

This looks nice: simple, complete basic infrastructure. Why did it take PBOT 5 years (not including planning!) and at least separate construction phases to get this done? This is basic, elementary stuff that should be a part of every project. Rebuilding this 3+ times in 5 years is sad waste of resources that I hope PBOT has learned from: do it right the first time!

My understanding is they do it in stages like this with the planters first to assess if the configuration works before spending significantly more on a more permanent solution. Although sometimes the more permanent configuration still fails like the Ankeny diverter. I’ve seen more than one driver going through this section on the wrong side of the road but it seems to be generally cutting down on the cut through drivers.

If they don’t start it by using the “temporary” label then the neighbors won’t go for it. So, they do it and then collect the data to prove that if you indeed barricade cars out from an area than the usage will go down. Go figure ;). As for wasting resources, this is pennies compared to what the city spends on very clear and evident issues in our town that wish they could see a 43% decline.

I pass through this intersection every few days and really appreciate the work that’s gone into it. Just a little bit sad that the splendid street painting that the neighbors did lasted less than a year, though.

Per PBOT’s statement: ” …after identifying it as one of the worst-performing greenways in the city …”, sure it makes sense it would fail…as its though to grow anything on well travelled asphalt!.

[Kinda of a late April Fools funny.] I cannot wait to try this enhancement out for once was a very poorly designed intersection.

There was a bunch of community activism (not the Neighborhood Association) by Inner Southeast Action along with the immediate neighbors involved in these improvements.

It started with “gatherings on the greenways” serving breakfast at this intersection after all the yellow wands got installed, then to an intersection repair with city repair, then to this permanent design.

The permanent design was very much improved by neighbors – it would have been only concrete, and many yellow wands would have remained, but neighbors meeting with PBOT improved the design, get some green space, a tree, etc.

Also, the history is complicated by the ADA. To do the “permanent solution” required making the corners accessible, which was beyond the budget. But then a disabled person requested curb ramps, which triggered a most basic permanent solution.

But because the intersection had just been painted along with City Repair, PBOT approached the neighbors instead of just installing the basics.

Thank you PBOT for working with the neighbors!

This story deserves an article of its own. Neighbors supporting biking and walking infrastructure! Astounding!

We have been so impressed by the neighbors’ activism and action in this project. They took it up with thoughtful enthusiasm and consensus. More to come at this intersection!

It’s worth noting that many neighbors didn’t like the traffic calming at first because it was ugly. They didn’t feel like there was anything they could do to improve it. But PBOT was responsive once they knew who to talk to.