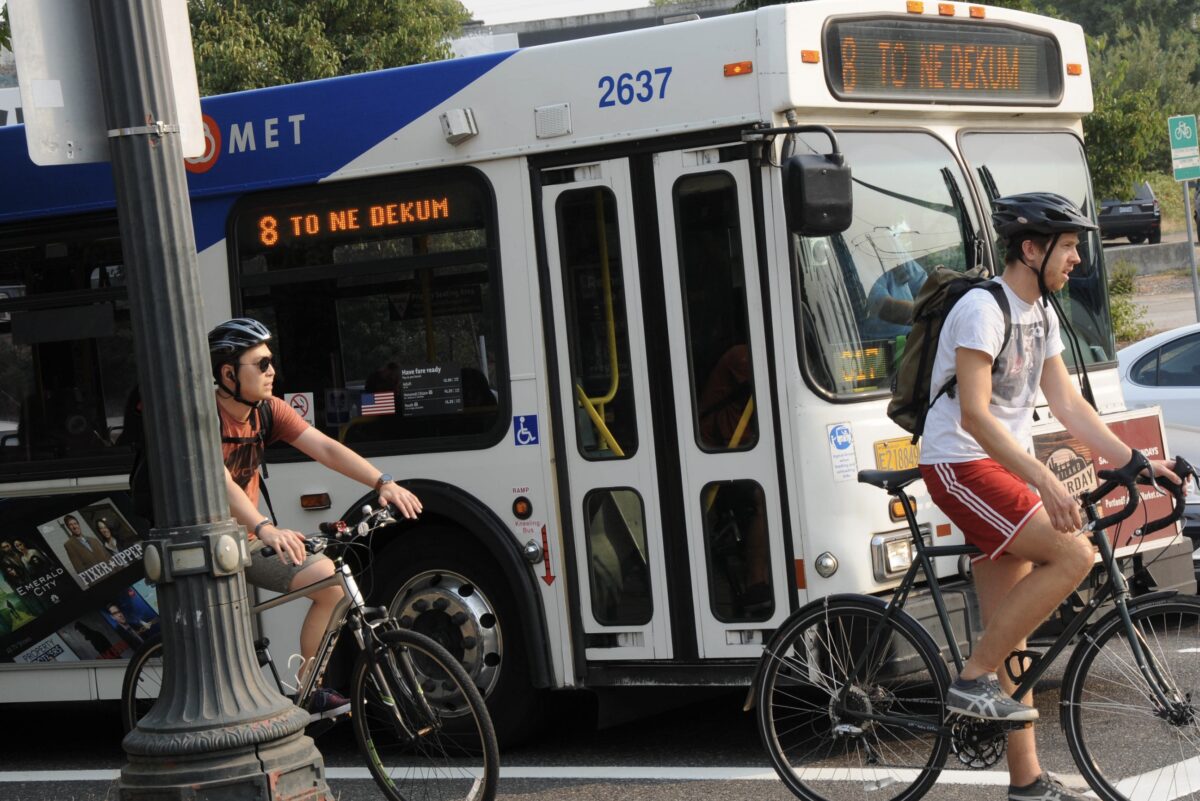 TriMet, like public transit systems across the country, was hammered by the Covid-19 pandemic. 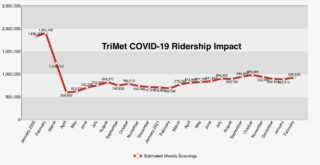 It’ll be a long road back. (Source: TriMet)

In February 2020 TriMet had an estimated 1.9 million weekly boardings. Two months later that number sunk to just 599,000. The agency then reduced service due to a driver shortage. Experts believe even if everything else “returns to normal,” it’s going to take a long time to recover pre-pandemic ridership.

How can TriMet recoup those bus riders? Well, that’s what it wants to know, too. So the agency is asking the community to fill out a short survey, which they title ‘Forward Together,’ about what people think should be prioritized as TriMet looks to beef up service.

Portland-based transit consultant Jarrett Walker says this will be the first step in a project looking at how TriMet should change its bus system as we come out of the pandemic.

“There will be additional surveys later when we have more information to present, but this helps get a first sense of what people’s priorities are,” Walker says.

Through the survey, TriMet says it’s “taking a deep look at our existing bus service and whether it is best serving our community,” looking at where buses are running now and where people think they should run, if riders are traveling more between the suburbs or in-and-out of downtown Portland and if people think TriMet should have more buses running frequently along popular routes or spread buses out so more parts of the Portland metro region are served.

The survey also asks how important certain equity considerations are to the community and what people think are the most important priorities TriMet should consider as service is restored.

“The COVID-19 pandemic has changed the way people travel, and we may never go back to the way things were before, so we’re evaluating our plans to move forward together,” TriMet says.

The survey is open until March 31. Take it here.

Reroute buses as shown in 2013 and 2014 TriMet bus service plans. Reroute bus 45 over the Sellwood bridge. Only one bus uses it, the 99, and only on weekdays. Haven’t other cities rerouted buses using Jarrett’s work?

And the 99 wasn’t running when I needed it yesterday AM. Looks like it is rush hour only, and a narrow rush hour.

Took the survey, found it mostly useless, just a “what is the purpose of transit” kind of thing.

TriMet probably knows why ridership has fallen, why it is not coming back, and needs to figure out how to resolve the sorts of issues that have caused everyone who can possibly flee the system to do so (mostly to their cars, sadly). Getting a grip on the system’s collapse is job #1 for a variety of reasons, most salient of which is perhaps climate change.

The sorts of questions the survey asked will not really help much, except, possibly, as fodder for whatever TriMet’s next funding-application-driven project will be. (*cough* FX *cough*)

It’s the “rapid” transit route going in on Division. It’s cool because they’re making a bunch of good changes to make the route faster & more efficient and adding articulated busses (double-long bendy busses). It’s bad because there won’t be any dedicated bus lanes & nobody wanted to sacrifice street parking on Division, so those big busses will have to wait in traffic just like everyone else while some ding dong waits for a space to open up outside Salt & Straw.

Parking isn’t the issue at all; Even if you removed all parking on Division, you couldn’t fit a bus lane there without completely rebuilding the street, including removing many bioswales and curb extensions, and maybe not even then. And no one wants to go back to a 4-lane Division.

Using inner Division was a bonehead move, not just because of the congestion, but also because the route requires crossing the UPRR line at SE 8th, which, as you may know from other articles here, is frequently blocked for hours on end. Not ideal for “”rapid”” transit [extra quotes probably needed here].

Trimet had planned to route the FX down Powell rather than inner Division, but their modeling found that doing so would result in longer trip times from Gresham to Downtown because they could never make up the ~10 block detour. Do you have access to a better model or some information Trimet missed?

I never really get the intense FX vitriol. The 2, 75, 20, and 72 could all use better stops & transit priority — I’m really happy with a lot of these changes.

[***MODERATOR: I deleted the first and last clauses of this sentence, they were skirting into personalizing the discussion.***]
I’m not sure how seriously to engage when you paint things as black-and-white stupid.

Yes, there was information TriMet missed. The FX was planned before UPRR started blocking SE 8th for extended periods, but TriMet was warned it was coming. I don’t know how this crossing was modeled, but I strongly suspect that information was not factored into the decision because TriMet thought that buying UPRR some new fancy switching equipment would address the problem. It did not, and it seemed obvious at the time that this was wishful thinking.

I’m fine giving the bus priority on Division. I just don’t believe the hype that the service will be enough better to justify the claims. TriMet should have quietly closed half the stops (providing a big boost in performance at essentially no cost), and used its funding elsewhere.

That said, no anti-FX vitriol here… I hope the service works as advertised. I just wish TriMet were not further investing in diesel buses.

I started taking the survey, but was pretty appalled when I was asked to rank and prioritize these different needs:

Does anyone know of any way to get feedback to Trimet that asking the general public to rank which marginalized population should be prioritized is harmful?

TriMet needs to quit having “all busses lead to a Max stop” mentality.

We all know they’ve utterly failed at their ridership numbers. Quit trying to boost them needlessly by routing so many busses to Max stations. Folks need to go more places than the fixed mode trains go.

I kind of disagree with this. Feeder buses would work if the buses do just that. But no, TriMet often cannibalizes MAX with a redundant bus route. A good solution would be to treat MAX stations as transit centers and increase (huge emphasis on incrase) frequencies for both bus and rail.

Vote Up6Vote Down  Reply
« Lumberyard Bike Park will close this fall after ‘an amazing 10 years’
Weekend Event Guide: A midnight mystery, a memorial time trial, a market ride, and more »