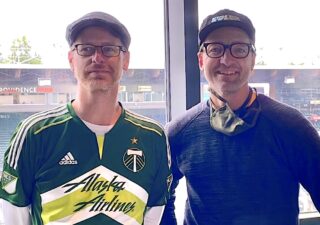 Mike Perham and I at a recent Timbers game.

I’m excited to share that we’ve received our first equity investment. What does that mean? It means that after 16 years, this little upstart media company you’ve helped build finally has some breathing room — and room to grow.

Believe it or not I’ve never had a business plan (shocking, I know). This business started in 2005 with a lot of long hours, love, optimism, hard work, and blind faith. And that’s pretty much been how it’s survived ever since. But everyone has a limit. And I probably would have reached mine by now if not for Mike Perham (@getajobmike on Twitter).

I’m proud to announce that Mike is a new co-owner of Pedaltown Media, Inc., the parent company of BikePortland.


“I believe that media can greatly influence how people see our current world and shape the future world… I want to help BikePortland build a better Portland by telling more of these stories.”
— Mike Perham

Mike has been a reader and financial supporter of BikePortland for many years. Back in February, he responded to one of my Insider Newsletter emails (which goes out to subscribers and supporters). In my letter that week I said I wanted to expand BikePortland’s content offerings beyond just printed words and still images. I’ve known for years that I wanted to do more audio and video content, but one thing holding me back was up-front equipment costs.

Thing is, BikePortland revenue had flattened in recent years, and had even started to go down. For several months we couldn’t afford to pay our bills. After all the work I’ve put into this thing, hearing that news from my accountant (who also happens to be my wife Juli) was very hard to swallow. The feeling that BikePortland still wasn’t “making it” after all these years, was so stressful. It made it hard to muster the energy and optimism this job requires. I won’t go into why I think revenue is down (there are likely many reasons), but I can tell you about the impact: It was sapping my confidence to grow and evolve the business like I wanted to. All I could do was what I’ve always done: Keep my head down, keep plugging away, and hope things would turn around.

Then Mike’s email popped up.

“Would you be interested in growing BikePortland?” he asked.

And I was like, “Heck yes man!” So we got to talking, and here we are.

Mike is a good guy (and what my lawyer referred to as, “a perfect investor”). He’s a successful open-source software developer and business owner who could relate to my predicament with BikePortland. Like me, Mike didn’t get into business to make a ton of money. He just wanted to do something he loves and to make something people like. And then he created software that people liked so much they were willing to pay for it. (It probably goes without saying that the software business is a lot different then the media business. It’s actually possible to make money in the former, and nearly impossible in the latter.)

Mike is a humble and quiet person, and doesn’t want any attention for all the things in our community he supports, but he did share this comment about why he invested in BikePortland:

“I’m not a traditional investor chasing profits. I believe that media can greatly influence how people see our current world and shape the future world. BikePortland is part of a new breed of digital media showing us how reducing auto dependence and building people and bike-friendly streets can make cities, businesses and property owners wealthier and happier. I want to help BikePortland build a better Portland by telling more of these stories.”

Mike’s investment, combined with the continued bedrock of support that we have from our 450 or so paid subscribers and a tiny but mighty crop of advertisers and other funders, gives me the ability to expand our footprint and make some of the moves I’ve dreamed about for years. These include: hiring some help, doing a complete site redesign, buying new audio/visual/camera equipment, and having a budget to pay freelancers.

It’s been several months since the transaction became final and you’ve probably already noticed some changes: We’ve hired Maritza Arango as our events editor (she’s been fabulous!), retained the services of Ryan Packer as our CRC 2.0 correspondent, kept Lisa Caballero on staff as our assistant editor and southwest Portland correspondent, and we’ve expanded our content offerings to re-launch of our podcast and produce more videos (you’ve subscribed to our YouTube channel, right?!).

And we’re just getting started! We’ve already embarked on a complete site upgrade and redesign and I plan to hire a news reporter (please get in touch if you’re interested or know someone). All these changes will allow BikePortland to do more of what we’ve always done, only much better.

Thanks to your continued support — and this investment from our friend Mike (and other potential investors who are reading this and want join us) — we will build a strong media company that maintains the values and vision BikePortland is known for, but that finally sheds the “Jonathan’s blog” vibe and charts a course for an exciting new chapter in our adventure. I’m so glad you’re along for the ride!

For more on our investment news read this article that appeared in the Portland Business Journal yesterday.

Thanks Joan! I’m pretty ecstatic about it. It’s going to be a lot more work, but now that I have more support, I feel better about doing it.

Congratulations. I’m excited for your future and look forward to further updates as they happen.

Congrats Jonathan and thank you, Mike.

Bike Portland is important to growing biking in Portland and by extension leading America towards a more bike-centric future. This blog is arguably one of the most important media outlets in America. Glad to see that BP’s future is more secure.

Huge congratulations, Jonathan! This is really great – and a big thanks to Mike for stepping up.
Bikeportland is such an important resource for the community – always has been – and this is acknowledgement and confirmation of the value of your work. Can’t wait to see the fruition of ideas I imagine you’ve been harboring for years – very exciting!!

I couldn’t agree more. I wish you all the best with these new circumstances. You’ve worked so hard, and here we are!

Absolutely incredible, congratulations! Thank you Jonathan and Mark for making the world a better place.

Congrats, BikePortland. We are looking forward to experiencing the growth of the reach of your positive impact!

WOW! Cool! Are we looking at Oregon’s next billionaire?

Not exactly Mike. I didn’t feel comfortable getting into financials, but this isn’t that kind of money. Not even close!

This is the best news I’ve heard in a long, long time. The stress relief will probably add years to your life.

Thanks mh! It really is stress relief. One type of weight off my shoulders, but another one put on them of course. Now I really want to make right by my dreams and do something great for the community that got me here.

Such great news; congrats to you both. I’ve seen BikePortland be a crucial part of improving our city time and again, in ways that inspire change elsewhere.

Going to CO Gravel this year?

Congrats–this is an essential site for my Portland news, and glad that you have someone who shares you vision and can invest in the future.

I bet Mike will be working in the background to make Bike Portland the best it can be.

I misinterpreted the word equity.

Vote Up1Vote Down  Reply
« Iannarone to remain as leader of The Street Trust as org unveils new plan and staffers
Opinion: 16 years after Portland’s ‘urgent’ Freeway Loop study, where has our boldness gone? »