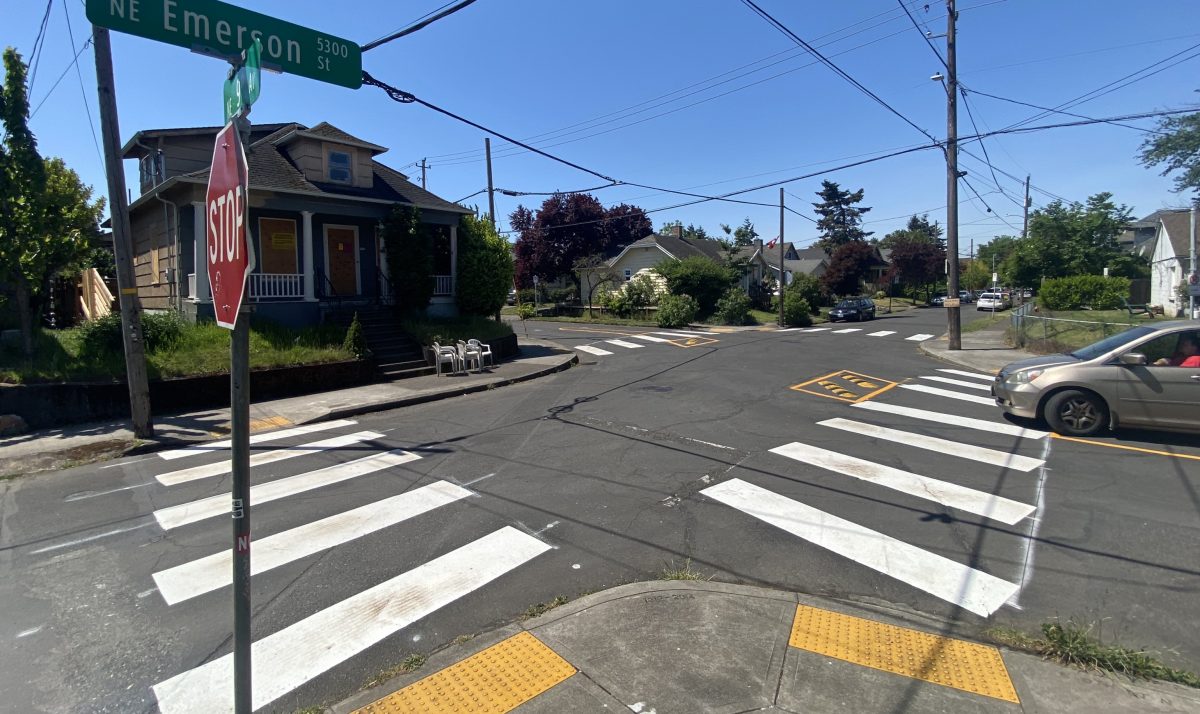 The City of Portland Bureau of Transportation is hard at work on the Lloyd to Woodlawn Neighborhood Greenway. This is the $2.0 million project that faced controversy in March 2019 when the initial route on 7th Avenue was rejected by some residents and PBOT switched it over to 9th. 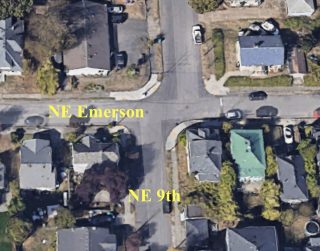 Over the weekend I happened upon the intersection of NE 9th and Emerson. It’s an offset intersection with only Emerson having stop signs. A lack of traffic calming had led to a lot of drivers shooting through the turn at high speeds and cutting into oncoming lanes. To make this a low-stress cycling street, PBOT needs to calm things down. Their solution is to add striping, plastic curbs and wands (which haven’t been installed yet).

As you can see in the photos, PBOT has striped the intersection to encourage people to make a more predictable, slower turn through the offset. There are now four zebra-striped crosswalks and they’ve used paint and plastic curbs to create de facto median islands. (Note: This is five blocks south of the new median at Killingsworth PBOT installed in 2020.)

As I observed the intersection on Saturday, a man who lives on the corner popped his head out. “Hey are you Jonathan? From BikePortland?” he asked. “I’m a subscriber!” We were instant friends.

The man said he’s absolutely thrilled with the changes. He says it has helped slowed people down and greatly improved safety thus far. While we chatted, one drivers completely disregarded the striping and curbs and flew through the intersection. Compliance from almost all others I saw was very good. Forthcoming plastic wands that PBOT is yet to install should encourage people to stay in the lanes and drive more responsibly.

Stay tuned for more reports as this project moves forward. If you’ve seen, driven, or ridden any of this, please let share your thoughts.

For more information, check out the BikePortland archives and browse the official PBOT project page.

CORRECTION: This story initial referenced the intersection as NE 9th and Webster. That was wrong. It is NE Emerson. Sorry for any confusion.

Wow. That was one of my least favorite intersections in the entire city. It was a deathtrap.
I was hoping for something more robust, but this is a huge improvement.

I don’t have a strong opinion on this, but I just visited a friend who lives 2 houses away from this intersection and I asked them about the changes. My friend is utterly perplexed, telling me that now there are regular horn blasts from confused drivers in conflict with each other in this traffic pattern. They are wondering “why on earth” the city didn’t just make it a 4-way stop. They reminded me of the bumbled handling of the intersection at 9th and Killingsworth, and vented about the cluelessness of the changes, and they don’t understand how these decisions are made, seeming (to them) totally baffling and counterproductive. Note FWIW that my friend is an avid walker in the neighborhood. My initial instinct, weirdly, was to defend PBOT, but I refrained and opted for commiseration and support. 🙂

I can appreciate your friends confusion. You have to remember that every little change to streets in this neighborhood is fraught with peril for PBOT because of the scars of racial controversy and a history of distrust and anger towards the city government in general from people who live in the area.

I feel that the biggest problem, as you allude to, is that PBOT designs have no consistency at all. So people using all modes of transportation are constantly seeing new experimental changes, and each intersection requires different and distinct use.

Even if it might on the surface appear less safe, I wish that PBOT would apply consistency with their designs. The more consistent infrastructure is, the easier and more intuitive it will be to navigate for people, and thus the more predictable and safer it will be to people using all modes.

For what it’s worth, four-way stops tend not to work very well at offset intersections.

This intersection has been a problem for many years and the new stripes and other ornamentation don’t fix the fundamental flaw. The stop signs need to be on Emerson, not 9th. Or a 4 way stop. Its an offset intersection, so if you’re at the stop sign, you can’t see if anyone is coming from the left until you’re in the middle of the intersection — and they have the right away. You can see this first picture in this post. People drive like hell through this neighborhood and its very dangerous.

Wands? I give em’ a week before they’re mowed down.