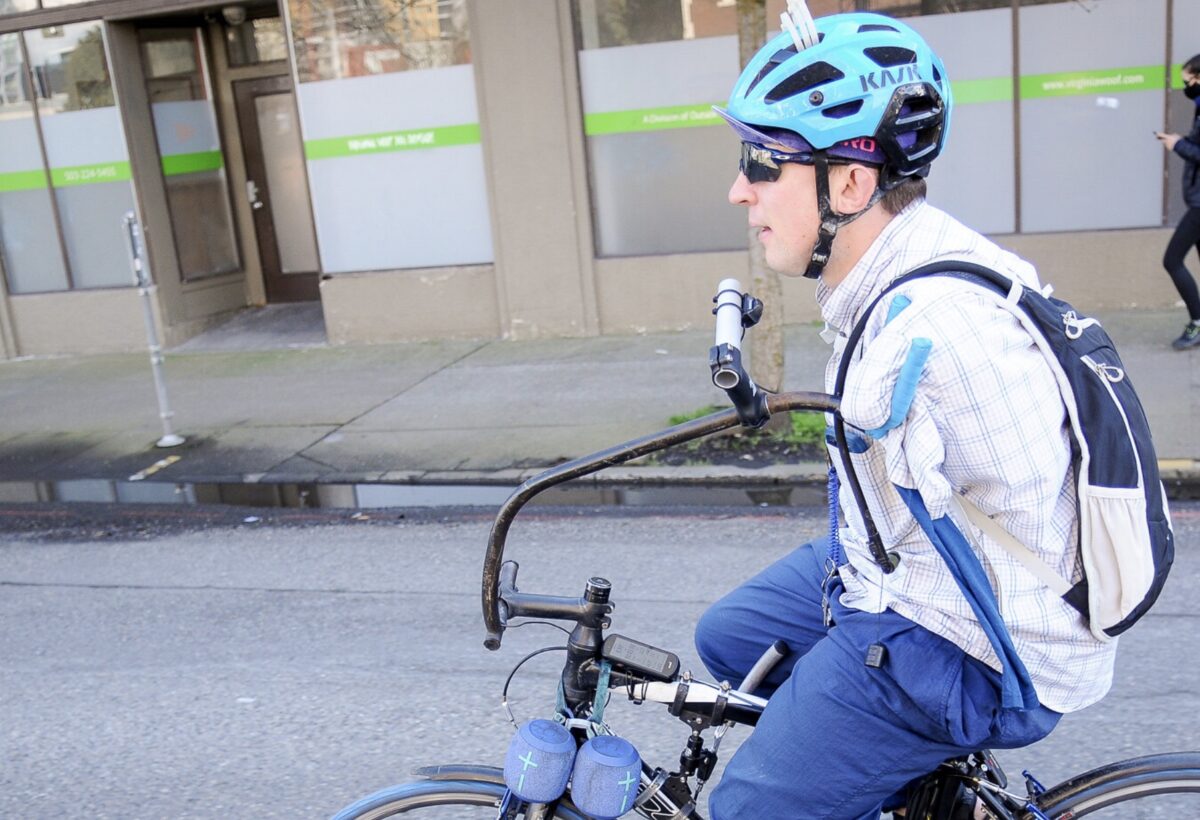 Just a few days after we profiled Michael Trimble back in March, he hit something while bicycling on the Springwater Corridor path. “I must’ve gone over a rock or hit a bump,” Trimble shared about the crash. “Because the entire handlebar dislodged and I ended up biking right into a tree.” (It happened in the tunnel under the train tracks at the “T” intersection where the Oaks Bottom path meets the Springwater).

The good news is Trimble wasn’t badly hurt. The bad news is that his bike suffered a serious blow. The impact completely dislodged his unique steering handlebar, broke his stem, and he could no longer ride the bike.

For most people, getting a few parts replaced might lead to a few days without a bike. But as you can see in the photo above, Trimble’s bike is different. Because he doesn’t have arms, he relies on a special handlebar that fits right under his left “nub” (his word). It took several weeks to track down someone with the skills and inclination to build a new one.

Michael found help from renowned local bicycle maker Dave Levy of Ti Cycles. Nestled in the west hills north of Forest Park, Dave’s shop is respected throughout the bike industry for creative problem-solving and high-quality builds. Levy has worked with Trimble on a new, made-from-scratch steering bar. (The two can be seen going over design considerations in the video above).

Knowing Levy, the new bar will set a new bar for cleverness and functionality.

Trimble is excited to get back on the road and he hopes to raise about $2,400 to pay for the repairs and upgrades.

“Cycling for me has been more than just liberating and empowering,” he wrote on a GoFundMe campaign page set up last week. “It has let me do so much more than I could have ever dreamed of. Biking has been an affirmation of just what is possible when physical limitations are not permitted to bind us from the can-do mentality.”

I CANNOT THANK YOU ALL ENOUGH FOR SUCH BIKETACULAR GIVING

I have seen you riding on the Springwater. You are an inspiration!

I was at TiCycles when Michael was there, what an amazing inspiration, makes a few years, aches and pains seem pretty silly to whine about.

Very glad he found Dave, another amazing guy in his own right, no way this doesn’t end up having a great outcome.