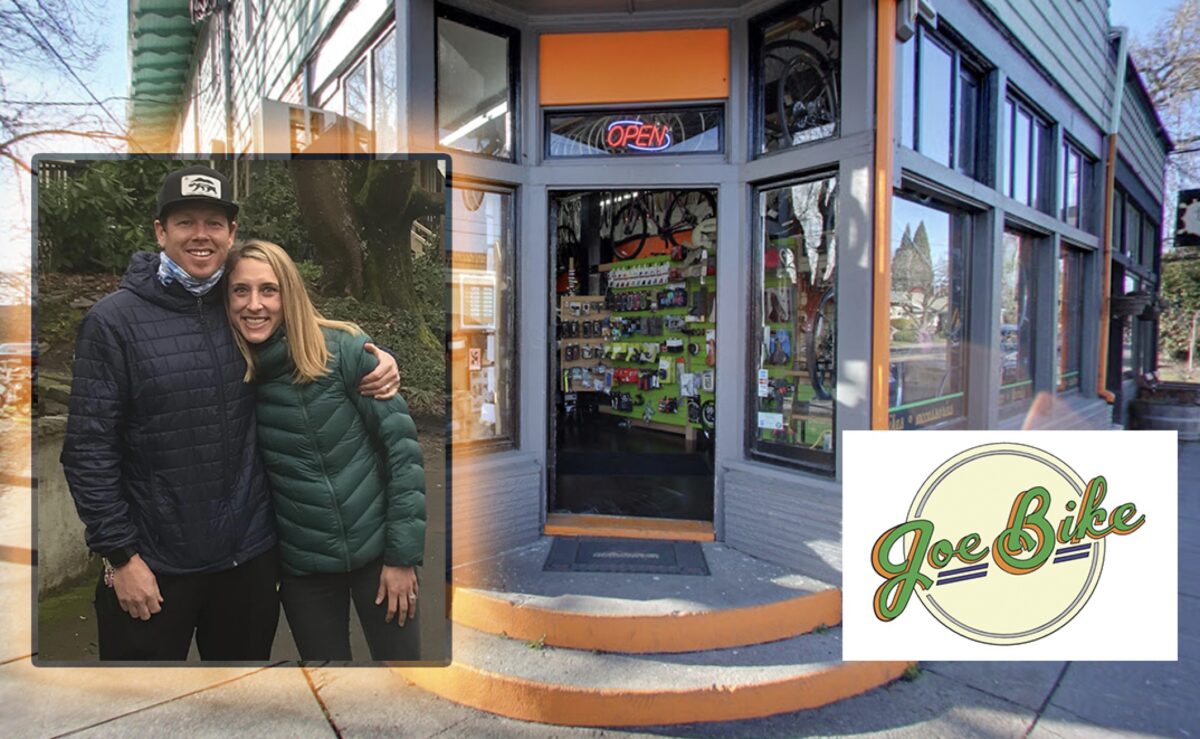 Local cycling entrepreneur Joe Doebele has sold his bike shop. Joe Bike, which occupies an historic retail storefront on the corner of Southeast Lincoln and Cesar E Chavez Blvd on a major bike route in the Richmond Neighborhood, will retain its name but is now owned by Auburn and Schuyler (“sky-ler”) Harrison.

Doebele burst onto Portland’s cycling scene in 2008 when he moved into a building on SE Belmont and 20th to sell commuter and cargo bikes. He moved the shop to its current location in 2012. Doebele was poised to open a second location on SE Clinton in February 2020, just before the pandemic changed everything.

Now Doebele is ready to move on and he’s happy to pass the shop to capable hands.

“It just felt like the perfect time to start fresh and follow a dream.”
— Auburn Harrison, Joe Bike co-owner

New owners Auburn and Schuyler Harrison are also new Portland residents. They say owning a bike shop is a dream come true. The pair spent the last 15 years in Reno, Nevada where they raised their three boys (ages 2, 7 and 9) and focused on careers.

“Most people thought we were just a little bit crazy to uproot our kids and our entire lives to move to another state and buy a business during a pandemic, but we felt like it was now or never,” Schuyler shared in a statement about the sale. Schuyler is a middle school teacher and University of Oregon graduate who grew up in Oakland and cut his teeth in the bike industry at Performance Bicycle in San Francisco.

Auburn is a former journalist who now runs a nonprofit fundraising and consulting business. “We kept thinking maybe we’d do it when the boys were older, but then COVID happened and things were messy and it just felt like the perfect time to start fresh and follow a dream,” she said.

Joe Bike’s new owners knew they wanted to own a bike business in Portland. “When we found Joe Bike, we knew this was the kind of shop we wanted to take on,” Schuyler said. “Joe has an incredible following and the shop is right on the greenway. We are so excited about the potential to
grow the company, build a tight-knit community feel in the neighborhood and get to know Portland more intimately.”

“This community has been nothing but welcoming and friendly in every single way. It’s beautiful and it’s alive, and we feel incredibly lucky and proud to be in Portland.”

Stay tuned for a big grand re-opening party this summer.

Sad for me, but it sounds like everyone is happy with the decision. I look forward to seeing them continue the awesomeness!

I fervently hope the current staff remain. This has been my very-local bike shop, since Bike Repair Collective closed. There’s no year in the date on my last hand-written receipt from the old Belmont shop, but it’s probably been ten years. Joe Bike has done a lot of repairs on my too many bikes in that decade.

Congratulations and welcome to Portland. What a wonderful move for you! I think Joe, the employees and customers will continue to be happy with Joe Bike, Auburn and Schuyler. Joe worked hard to build the business, and wanted it to continue to be successful.

Well I’m glad that they like the place as-is and hope this works out for them, Joe, the staff, and their customers.

For what it’s worth, Joe’s first store was at 40th & Hawthorne. He started out selling bike clothes, then moved in the bike selling business. Remember when he started selling modular Joe Bike cargo bikes? https://bikeportland.org/2009/03/06/joe-bike-unveils-versatile-new-cargo-bike-15826

Thank you. I thought I was going nuts when I was thinking, “I swear I brought my bike in for repair east of NE Caeser Chavez Blvd on Hawthorne, not Lincoln.”

It started as apparel. But, that didn’t last long. It became Joe Bike and it was a regular bike shop. It was always in that same spot on Hawthorne until it move to Lincoln. Not very important, but you may want to update the article to change it from a Belmont location to a Hawthorne location. https://goo.gl/maps/51FDCKQFHsNzytWs7

Jonathan’s right. I have it on good authority.

¯\_(ツ)_/¯ When I went there, there were more bikes for sale than apparel. Most were chained up out front, and some were inside. But I mainly went there for an IGH service. I never went to any other location than that one. The excellent Tess Velo was the head mechanic at the time.

Auburn and Schuyler, Welcome to the Portland bicycle shop business! Hope the transition goes smoothly. Look forward to meeting you sometime in the near future.

Thanks, Rich––we look forward to meeting you too!

“once-booming cycling scene”…curious, what your not-so-subtle point was?

yeah I just deleted that because it felt too negative. I wanted to delete it before but I forgot. What I was getting at was how 2008 was a different era of optimism and excitement as far as the Portland bike industry and the scene in general.

Congratulations to everybody. I haven’t done much business with Joe Bike but I’m pleased to see that a local bike shop in Portland is a thing that you can actually sell.