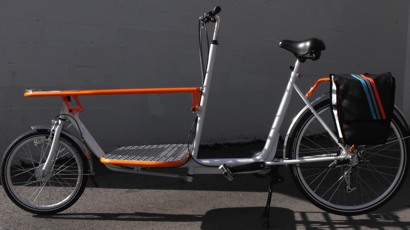 The front cargo area on the “Joe Bike” is very versatile. The upper rack can be removed and it also comes with the traditional, Dutch-style wooden box.
Retail price is $1599.
(Photos: Joe Doebele) 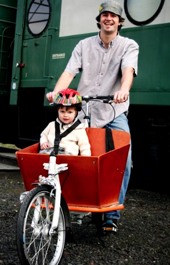 The bike also converts
to a Dutch-style kid carrier
with a wooden box.

The “Joe Bike” starts as one of Doebele’s Chinese-made box bikes (similar to bakfiets from Holland) that he’s been important and selling in Portland since December of last year. He then gives it a complete, ground-up overhaul and gives it a custom parts spec to come up with a cargo bike that retails for $1599.

According to Doebele, the bike can change into three configurations (with the upper shelf and without, and with the traditional wooden box) without tools. A fourth attachment, which Doebele describes as “tandem-style seating for two kids or one adult” will be available soon.

Doebele says at $1599 he makes less per bike than simply selling his stock, “Flying Pigeon” brand Chinese-made version, “but the innovation is enjoyable,” he said.

The bike’s frame comes from China, but Doebele has added several modifications from Stites (using steel from the U.S.) and he has tried to build it with as many locally made products as possible. The brake pads are from Lake Oswego-based Kool Stop and the bike comes with a full complement of accessories from Portland Design Works (based here, made in Taiwan).

If you’re going to the BTA’s Alice Awards event tomorrow, you’ll get to see the bike up close — it’s part of the silent auction.

— More photos and info at Joe-Bike.com

Pretty cool. I see many useful possibilities that can come from having, or not having, the box.

This guy is my hero. What an excellent idea and a great way to make utility bikes available to the rest of us. I wish there were a way to make those god-awful Wal-Mart bikes worth something, but it doesn’t seem like there is.

Looks pretty sweet. I’m a big fan of cargo bike technology. By chance, do y’all have a better photo of the upper rack from another angle?

Nature Boy: I snapped this one yesterday: http://www.flickr.com/photos/mikecobb/3332913438/ There’s some really cool lazer-cut detailing just visible in the photo. Bill’s got it goin on. Looking forward to a test ride.

oooh – that’s a Queen Bee pannier hanging on the rear rack. Made in Portland. Also available at Joe Bike.

take note that this new bike also features the drivetrain modifications that joe and company helped put into motion on my carrier pigeon box bikes. the new sturmey freehub with ultra-smooth roller brake is a dream.

congratulations on bringing this bike to life!

Fantastic! This innovative configuration is a very compelling option for delivery businesses.

What becomes of the original parts that are, apparently, not good enough for the American end user? Doesn’t seem to quite add up for me…Build something in China, ship it 7000 miles, strip off the parts…and drop them into the crucible?

common sense, i cannot speak as to what becomes of any parts left over after conversions, however, until my recent drivetrain conversion (i wanted to move to an external derailleur, instead of an internal hub), i have run my box bikes completely stock. i’ve found the bikes to be very capable ‘as is’ (out-of-the-box). read my blog for details on my experience with the carrier pigeon box bike.

in my opinion, what joe is offering here is variety and options; he’s taken something out-of-the-box, and by approaching it as a platform (for customization) he’s provided several different options to the consumer. what’s more, he’s managed to do it while keeping costs relatively reasonable.

i don’t believe it’s an issue of whether parts are ‘…good enough for the American end user’… it seems to me to be more a question of, ‘what does each individual end-user want in/from their utility bike?’ to this effect, i believe joe is doing very well.

I’ve been there and tried out some of the rides: Fanstastic! Great store, nice people. Thanks Joe-Bike. I’ll be back in soon!

I’m planning to post some pics and video from the quick test rides I took on Unpollute in the near future.

I think that’s supposed to read that he makes less on the fancy version, even though it’s selling for $2699. Which isn’t much cheaper than a Dutch Bakfiets. All of which might incline me, if I won a lottery, to give the same amount to CAT in Eugene for a Long Haul.