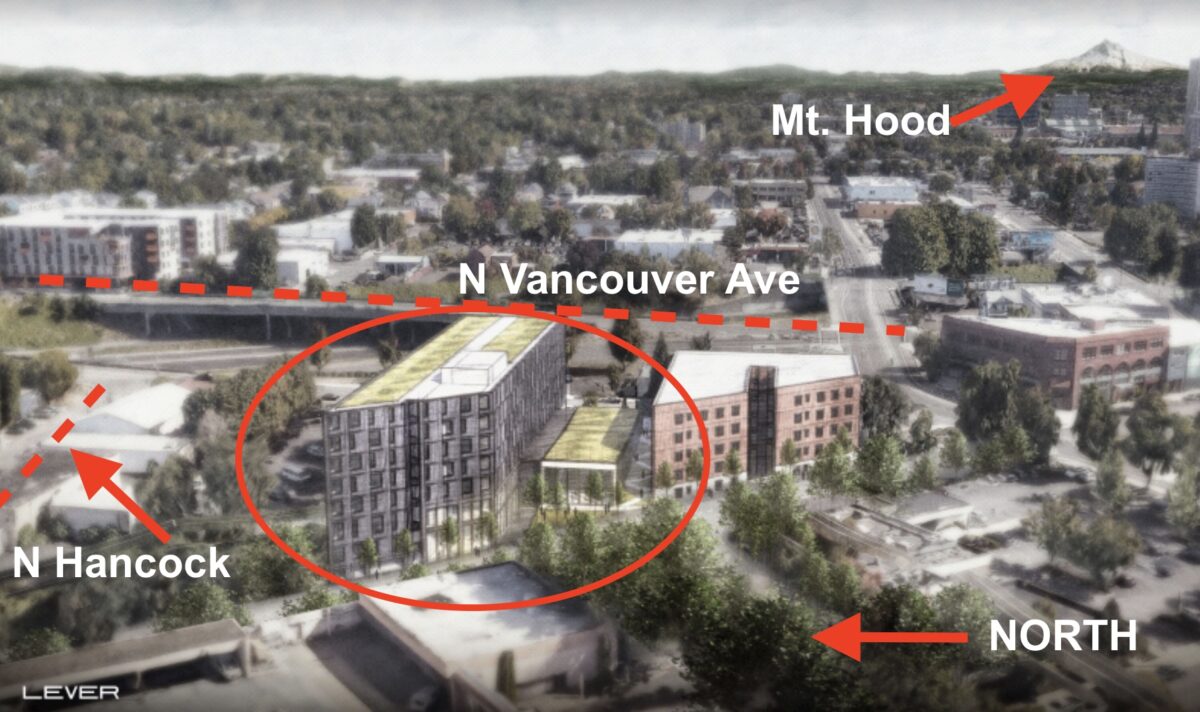 “Ownership allows us greater ability to advance community wealth building initiatives and helps us to exercise greater collective influence about what else happens in the district.”
— Winta Yohannes, Albina Vision Trust

Albina Vision Trust (AVT) has taken a major step toward the dream of restoring a historic Portland neighborhood. Calling it a “huge milestone,” the nonprofit announced today they’ve partnered with Edlen & Company to develop an affordable housing and community theater project in the Lower Albina district.

The new seven-story building will be located between North Flint and Wheeler avenues on what is currently a parking lot behind the Paramount Apartments (circled above). The project will create 120 units of affordable housing for families who make 30 to 60% area median income (which is about $70,000). According to a statement from AVT the adjacent theater, “Will anchor the district as a place for artists, creatives and youth while connecting the future of the neighborhood to its rich cultural heritage.” 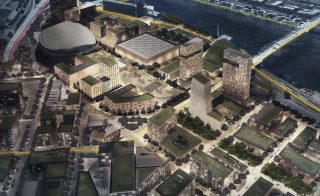 Conceptual rendering of the full build-out. The parking lot parcel would be in lower middle.
(Source: Albina Vision Trust)

That’s a reference to the vibrant neighborhood that used to exist in lower Albina before it was bulldozed in the late 1950s as a result of racist urban planning and the construction of Interstate 5. When we first reported on AVT in 2017, Board Chair Rukaiyah Adams called the area, “ground zero for the discussion about equity and history in Portland.”

This is not just about real estate, the project gives AVT a “physical and spiritual ownership stake in the district,” says today’s statement. “Wealth created by this project will be held held in community ownership and we can now think about how those resources go back into the community,” AVT Executive Director Winta Yohannes said in an interview with BikePortland yesterday. “Ownership allows us greater ability to advance community wealth building initiatives and helps us to exercise greater collective influence about what else happens in the district.”

“And because now we can envision more people living there,” Yohannes added, “How does that influence our decisions about transportation, education or any number of other policy conversations that are happening in the district?”

Through a statement, Adams also spoke about the importance wealth generation through the built environment and the, “re-rooting of Black people” in Lower Albina. “We aim to thrive, not just survive,” Adams said. “And it begins with this project.”

The planned theater is a clear example of that “aim to thrive”. According to Yohannes, “As creative organizations and artists continue to be priced out of the city, it was important for us to anchor Lower Albina’s rebirth with the theater – in recognition of both the cultural history of the district and of our aspirations for its future as a district truly for the people.”

The tension between an area designed for people versus one designed around an interstate freeway is at the crux of AVT’s ability to achieve their vision. 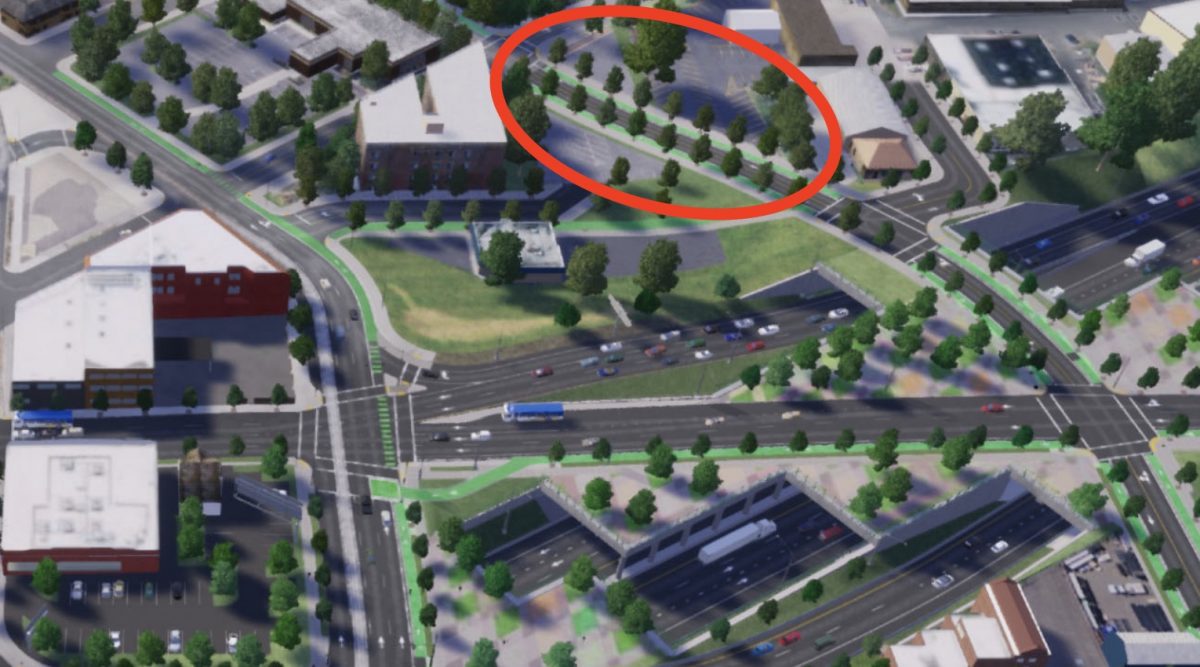 ODOT’s plan for a new road behind the Paramount Apartments (circled in red) will have to change.

Looming over this project is the Oregon Department of Transportation’s I-5 Rose Quarter project that plans to spend nearly $800 million to widen the nearby freeway and make a host of surface street changes. AVT pulled their support of that project in June 2020 because they didn’t approve of ODOT’s direction and didn’t trust that the agency would take their feedback seriously.

While AVT has pulled their support for the I-5 project (and has no plans to come back to the table), they had to negotiate with ODOT on this development. That’s because the building will be constructed where ODOT had planned a new street and overpass. Current plans from ODOT include a new road that would bisect the parking lot and go across I-5 between Hancock and Dixon. It’s unclear how ODOT will change their proposal to accommodate the AVT development, but the agency has signed off on it. 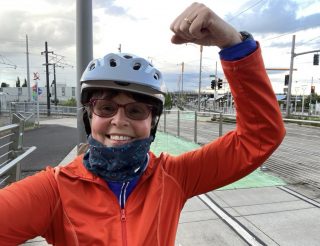 The owners of the parking lot are Rich and Betsy Reese. Betsy Reese also happens to be a veteran transportation activist who you might recall from BikePortland stories over the years. AVT’s Yohannes said this project would not have been possible without Reese’s commitment to the vision. Reached for comment, Reese said she began conversations with AVT and Edlen & Co. a couple years ago. She said ODOT has worked out an alternative design that won’t interfere with her parcel. “ODOT said that if AVT and the City were ‘OK’ with the change, that they were ‘OK’ with it,” Reese shared. “I’m so relieved that the shadow of that [ODOT] plan on the drawing board won’t diminish or delay the building of our affordable housing project as soon as possible.”

The new building is expected to be completed by August 2023.

AVT recently held a community design workshop to help garner feedback about what other spaces in the district should look and feel like. For the past three years we’ve had to close our eyes and imagine the possibilities. Today’s news gives us a much more tangible vision.

thank you for all you have done to make lower albina a better place!

Finally, a win! Betsy, are you selling the property to AVT, or will you lease it to them and retain an (activist) interest?

While I think I know the answer to that, I don’t want to speak for others. I have been involved in many discussions to hammer this out, however, I feel like the procedural language is one I understand but do not speak.

I can say that Rich and I have long been looking for a way to shepherd our property under a new ownership that would ensure it’s highest and best use for the neighborhood and our city.

For the details, I’m referring people to

Thanks so much, Betsy, for working with AVT on this! You’re part of making our neighborhood a better place!

Amazing work. Let’s make the Broadway/Weidler and Williams/Vancouver couplets a livable space with protected bike lanes. Jo Ann you can do this! Imagine how awesome this area would be with walkable and ridable streets. So excited for the theatre and Albina.

By ODOT allowing AVT to build their project, the Oregon Governor and state legislature will check off a few diversity boxes, save money on an unneeded roadway, and steam forward with the I-5 expansion. I expect ODOT to close a few more deals like this to whittle-away more of the mitigation pieces on the expansion so that the state only has to pay for expansion and not mitigation.

I’m curious about how ODOT to resolve all this. The Hancock-Dixon Crossing was mitigation for removing N Flint. The new street started at N Wheeler, so that it had enough distance to climb up above southbound offramp to Broadway. That’s why the new multiuse path on the N Flint alignment, between Dixon and Broadway, would have required switchbacks on what is today a relatively flat portion of street.

With another building already approved at N Flint and Hancock it seems like the existing grade of N Flint would have to be maintained south of N Hancock, but that’s probably too low for the landing of an east-west street over the freeway.

Thanks for pointing this out, Iain. I do recall this as one of the gyrations ODOT went through earlier as they tried to make a terrible plan palatable. Do you think there is enough momentum that ODOT could be required to keep N. Flint Ave in service?

There is a desperate shortage of housing affordable to people making <50% MFI in Portland so I applaud the work of Executive Director Wintes, Board Chair Adams, and others involved in this project.

What is the overall MFI in Portland?

While I applaud the good efforts by everyone involved, but isn’t this old time thinking? We now live in an era where downtown office buildings may stay vacant due to work from home. Apartment occupany rates and rents are plummeting, even in San Fran and NYC.Once the eviction ban is ended this trend may accelerate. Oregon has become a net outflow state. The city is now chock-a-block with newly completed and mostly empty apartment buildings with more being completed soon. Many of these buildings will financially fail ( and are owned by hedge funds etc. ) The city could bide its time, pick these buildings up for nickels on the dollar, and convert them in to affordable housing. We must get a clue and work with the flow of history and not against it.

ODOT is constructing these diversity projects as a way to game the system as a solution to the urban racism they created.

We have dollars connecting those who have power and refuse to use that power to act on opposing ODOT. Even the street trust is in on the game to sell diversity and “much needed” freeway caps ( ODOT marketing sold as a blog)

Great to see a vision begin to be concrete! Bravo Betsy and Albina Vision.
A historical point: City Council originally sited the voter approved Memorial Coliseum in the South Auditorium URA…from which immigrant Roma, Italians and Jews were removed. A petition put the matter of location on the ballot, and the Lower Albina site won. East siders wanted a piece of the action, and a thriving African-American cultural nexus was destroyed to accommodate the MC and its acres of parking lots. I confess I did enjoy the Buckaroo hockey games with my dad at the Memorial Coliseum.

Vote Up2Vote Down  Reply
« What would happen if we shut down I-405? We’re about to find out
Amanda Gorman’s words help America turn the page on Inauguration Day »