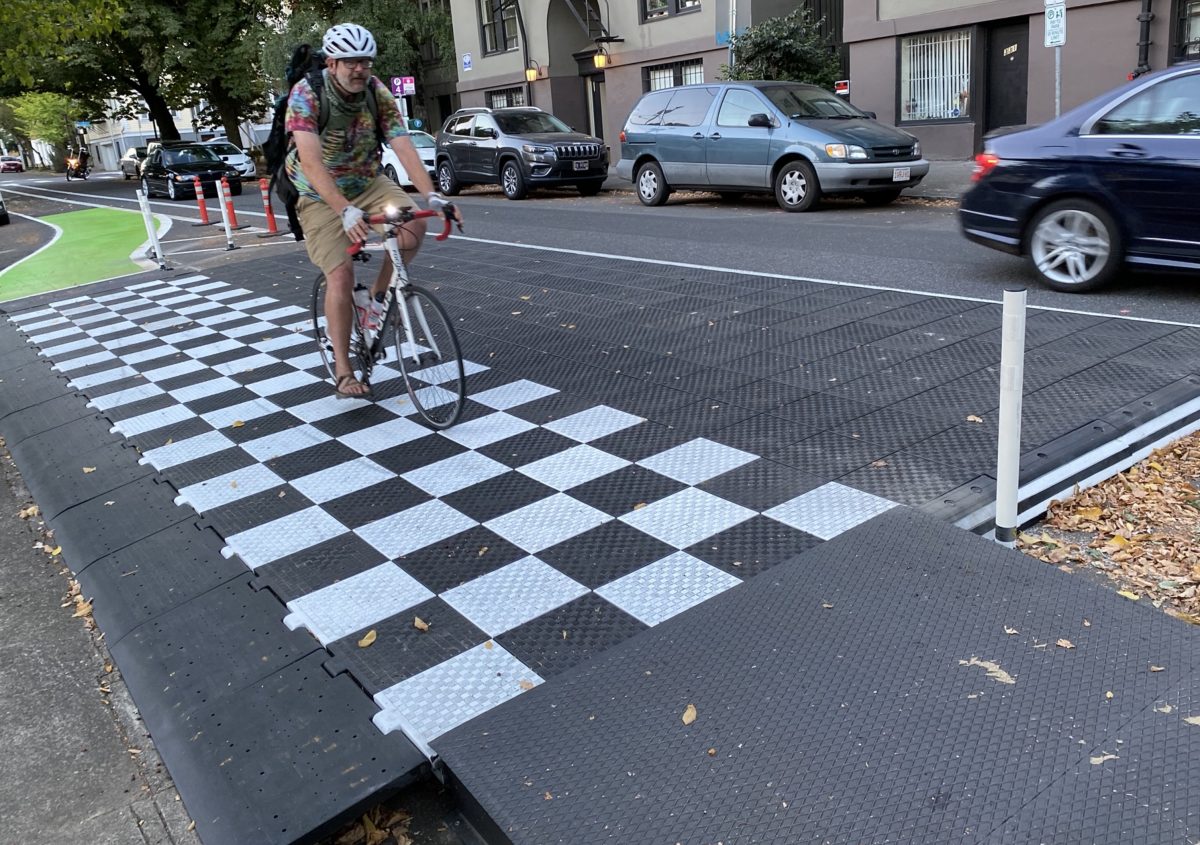 New bus island on NW 18th at Flanders already getting some use.
(Photos: Jonathan Maus/BikePortland)

“Over the next several years, this tool will be implemented in a variety of contexts and locations throughout the city.”
— PBOT

How to safely integrate bus and bike traffic on the same street has been a challenge for the City of Portland for many years. When bus operators service curbside stops, they often encroach into the bicycle traffic lane, cutting off riders and starting a “dangerous dance”.

Curbside bus stops also require bus operators to swerve out — and then back into — other lanes. And because so many people fail to yield to the bus, this causes travel time delays for transit users.

The solution is to put the bus stop out in the roadway so that the bus driver doesn’t have to swerve at all. These are called “floating bus islands” and now the Portland Bureau of Transportation has a way of installing them that’s relative cheap and simple. In fact, the new bus islands snap together like Lego bricks.

Just over two years ago, PBOT began looking into pre-fabricated bus islands from Spanish company Zicla and they’ve finally installed them. There are two islands in place in northwest Portland on NW 18th and 19th at Flanders.

18th and 19th form an important north-south couplet for bicycle and transit users. These streets will become even more vital in our bike network as PBOT finished building the NW Flanders bikeway (which will include a new carfree bridge over I-405) and other street updates as part of the Northwest In Motion plan.

From a riding standpoint, the experience was very smooth. The gradient up the ramp is very slight and the blocks are snugged together so well I didn’t feel much of a bump at all. The blocks are also bolted into the ground so they don’t move when you hit them. The material itself is recycled plastic that has a texture on it. I don’t think slippage will be a problem, partly because of that textured surface, but also because this product has been tested and used in many other cities worldwide.

Once up the ramp, the biking zone has a bold checkered pattern to keep it separate from the bus passenger loading/unloading zone. There’s ample space for bus passengers but keep in mind that people on foot have priority and you should be ready to brake and/or yield to them when necessary.

During my observations last night I didn’t see a bus passenger and bike rider use the platform at the same time. The real test of these will be at a location that’s busy for both bus and bike riders.

From a bus riders’ perspective the only thing that will change (besides faster trip times) is a few extra steps required to reach the curb.

Car drivers will experience delays on one-lane roads because they won’t have the option of swerving around the bus when it pulls to the curb. Sorry!

Given the ease of installation, relative low cost (about $30,000 to $50,000 each), and big benefits for biking, walking (the islands shorten the crossing distance at intersections), and bus users/drivers PBOT says they expect these to be used, “in a variety of contexts and locations throughout the city over the next several years.”

These islands will be particularly useful in locations with protected bike lanes where PBOT has been reluctant to install curbs and wands due to bus access needs. PBOT also sees them as a key component to speed up buses on their Rose Lane routes.

And who knows what else PBOT will do with them? “This technology could allow for more creativity and experimentation with various design choices,” PBOT said in a statement yesterday, “Since, like building blocks, these platforms can be quickly disassembled and reassembled as something else entirely.”

Does this having anything for blind people who rely on tactile surface or some indicator to know when they’re crossing the bikeway? Besides the other transit riders standing around looking only at their phone. Maybe a railing or shelter in the middle so it’s two crossings instead of a wide-open space. People on foot pivot and turn around unpredictably or just wander while they’re waiting.

I too am worried about the design for the vision-impaired. The lack of a bright yellow stripe at the outer (street) edge is very worrying, especially for people who have blurry vision or peripheral-only.

That’s what the white stripe is for. There’s no requirement in ADA that things be yellow, that’s just a traditional color for truncated domes at ramps. They’re sometimes white instead of yellow, and there’s no difference in terms of accessibility.

But the stripe is on the almost-vertical surface, so it’s useless to everyone regardless of color.

This is great news…to bring this well used international treatment / design configuration to the NW.

Though the critical question for me would be: is the use of these pre-fabricated modular pieces less expensive than using local preform / extruded concrete curbing and asphalt lifts? [I was an early proponent of the prefabricated rubber speed cushions / humps when our department was piloting them for the NW back in the early 2000s…but we soon found it to be more expensive to buy + install + maintain such prefab equipment vs. more durable asphalt.]

They’re cheaper because they don’t impact drainage and can be installed more quickly.

ON first glance it seeme thees would be less cexpensive and time consuming to replace after major damage.

“Car drivers will experience delays on one-lane roads because they won’t have the option of swerving around the bus when it pulls to the curb. Sorry!”

One of these is post-intersection. I predict drivers blocking the intersection often while waiting behind the bus.

That one is located further from the intersection for that very reason.

What’s the bumpiness of the ramp transitions?

Will I ever be able to bring a box of cupcakes home without them being stuck to the lid or upside down upon arrival because the streets aren’t smooth enough?

The Mayor of Portland IS the police commissioner. Why would he direct his men to be hands off on Trumpers? The fact is, the majority of officers are used at night, when the “protests” tend to become more violent. Those officers can’t work 24/7. They have to rotate shifts, go home & rest up for the night shift. The day shift is going to be a smaller force because there’s less crime during daylight hours. Saying they’re stretched thin isn’t a cop out. It’s the truth. If you want more police in the daytime, quit burning & looting at night. ‍♀️

All of these designs are dangerous for vulnerable pedestrians, that has been proven in Copenhagen and elsewhere. Pedestrian first is the hierarchy of the street but not in Portland. For persons with disabilities, it means they will not use these stops and makes large parts of the city inaccessible and dangerous to be in. Not very equality minded from the city officals.

Vote Up0Vote Down  Reply
« $25,000 PBOT grant will go to Albina businesses and street art to honor Black Portlanders
Portland Police ended Critical Mass. They should do the same to the Trump caravan »