A good example of bus/bike integration at a transit stop 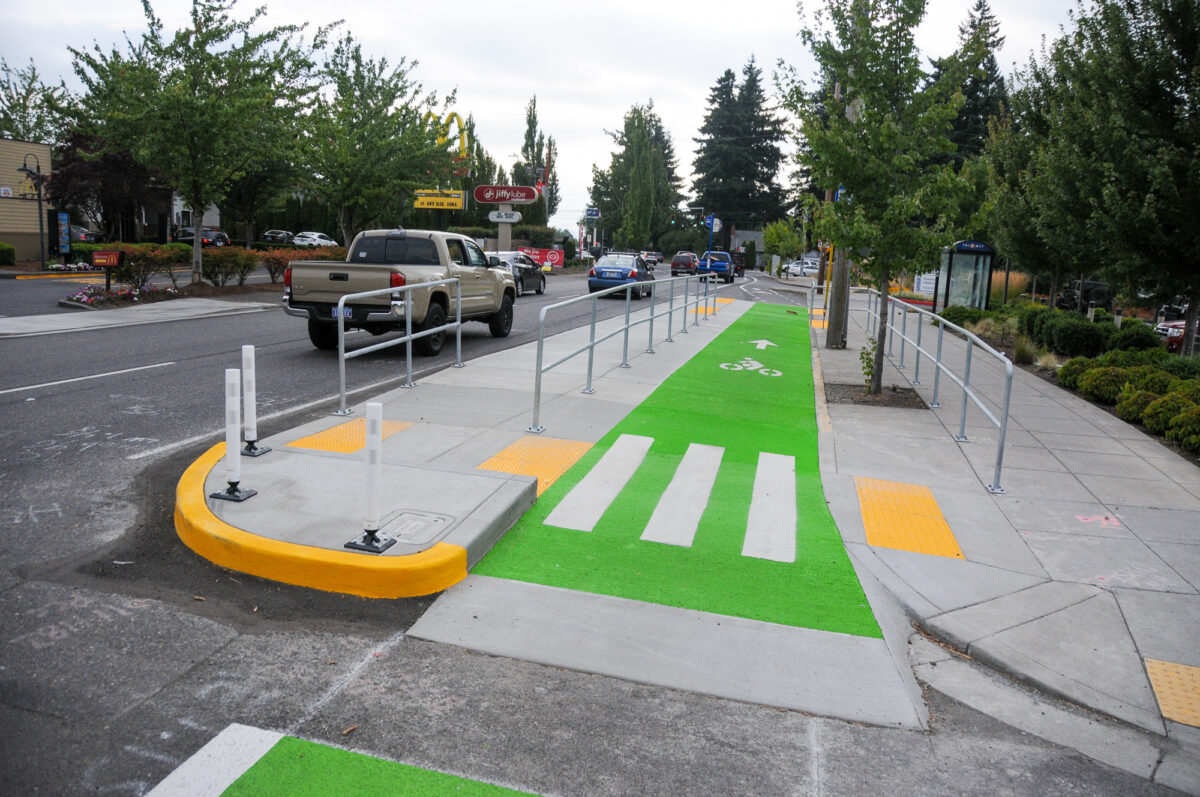 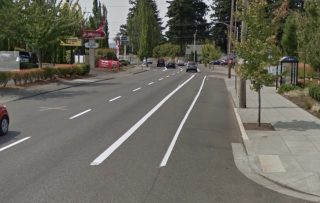 Two things caught my eye: Gateway Discovery Park and the new bus stop at Northeast Weidler and 103rd Place. The park is a-ma-zing. It has so many cool features and amenities. Best of all, it was packed with people using them — people of all shapes, sizes, backgrounds, incomes, colors and interests! I’d love to write all about it and why I think high-quality, modern public parks are so important to our city; but since this is a transportation blog and not a park blog, I’ll just focus on the bus stop.

The Portland Bureau of Transportation (PBOT) and TriMet have tried a million things when it comes to getting bicycle users through a transit stop safely and efficiently. Lately we’ve seen more floating transit islands that allow bus operators to service stops without swerving over to the curb. That’s a good thing because curbside service blocks cycling traffic, creates a dangerous leap-frog passing situation, and causes impatient road users to do bad things as they try to go around stopped buses.

For some reason this bus stop on Weidler near 103rd must have not registered when I first saw it back in June. After seeing it again yesterday, I think it deserves more scrutiny. My first impression is that it’s one of Portland’s best examples of how to integrate transit and bicycle users.

Scroll down to find out why I like it so much…

Unlike some of our other floating transit island designs (like several on SW Moody and others on Halsey-Weidler), this one has the bike lane at the same elevation as the island. Sharp curbs and bike lanes are not a good mix. I don’t love the feeling of biking in a narrow chute with curbs on both sides, curbs also trap debris and make leaving the bike lane hard/impossible depending on your ability to bunny-hop.

The biking space is clearly delineated from the walking space. It’s not only green, but the coloring material has a different texture than the adjacent sidewalks. This helps people understand how to treat the spaces: one is for waiting and walking, the other for through traffic.

On a similar note, PBOT was didn’t skimp on their installation of metal railings. I don’t recall seeing this much effort made to keep a bike lane clear of walkers (if that’s their purpose) anywhere else in the city. I like these railings. They reinforce that the bike lane is a traffic lane that should not be encroached upon. There are openings on each end, so people can easily access the bus island.

The entry and exit from the island is straightforward and safe.

Of course I’m biased. I rarely take the bus and I navigate the city on two wheels much more often than on two feet. When I shared a photo of this bus stop on Twitter yesterday, several people had questions about how it works for transit users.

“Wow, that looks confusing,” remarked one reader. “Certainly not intuitive. Will probably need a lot of lettering on the pavement so you’ll know what’s going on. Or signs?” Others pointed out the stop could use shelter, benches, and other amenities (note that I’m not judging the stop itself, just the bike/bus integration).

Overall the reaction to my tweet was positive. One person said, “It’s leaps and bounds ahead of what we’ve done before.” Another person who rides by it daily said they “love it.”

What do you think? How does this bus island compare with others in the city? If you want to take a closer look at this — along with some of the brightest biking minds in Portland — join the PBOT Bicycle Advisory Committee on a bike ride next Tuesday (8/13). Meeting agenda and route map here (PDF).