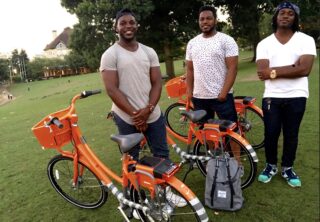 When we interviewed U.S. Congressman Earl Blumenauer in the aftermath of the 2016 presidential election he said, “If four years from now the places that can make the most advantage of transportation investments don’t get that help, that’s going to be not just a missed opportunity in terms of safety and economic benefits of transportation — it’s going to be a lost political opportunity as well.”

The bill invests $1.5 trillion in infrastructure projects and programs including $500 billion for transportation-related needs. The League of American Bicyclists has heaped praise on the legislation, saying, “This bill is transformative – it’s the first bill to approach real reform in almost 30 years… and will move the country forward in building a safer, cleaner, more equitable transportation system that better meets the needs of everyone.”

Among the highlights are several of Blumenauer’s top priorities that he’s been pushing for years including a stronger tax benefit for people who ride a bicycle to work, a policy tweak that would allow transit agencies to invest in bikeshare systems, and funding for Vision Zero plans. Blumenauer introduced a total of nine bills that were included in the Moving Forward Act and five of them are related to transportation:

Bicycle Commuter Act of 2019 (H.R. 1507): Reinstates the bicycle commuter tax benefit, increases the value of the benefit, allows the benefit to be used with parking and transit benefits, and expands the benefit to include bikeshare and electric bikes. 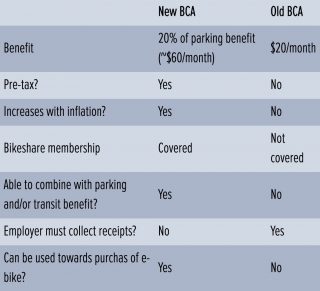 A beefed-up Bicycle Commuter Act will replace the old one that was repealed by the Trump Administration in 2017. The new version is much-improved and will now cover bikeshare memberships, provide nearly three times the payout (on average, based on 20% of parking benefit instead of a flat $20), and can be used toward the purchase of an e-bike (see graphic at right).

While there’s reason to celebrate the bill getting this far, its chances in a Republican-led Senate are slim. Representative Sam Graves (R-Missouri), the top Republican on the House Transportation & Infrastructure Committee put out a statement yesterday saying the Moving Forward Act “won’t get signed into law and won’t do anything for our infrastructure.” The bill is nothing more than an effort to “appease the Majority’s most liberal Members by turning our transportation system upside down with unworkable Green New Deal requirements,” Graves said.

While this legislation moves forward on Capitol Hill, Blumenauer wants to talk to Portland-area cycling and transportation reform advocates. He’s scheduled an invite-only roundtable for next Friday, “To discuss the role of active transportation as we consider opportunities to improve our transportation system in response to the COVID-19 pandemic.”

And here I was ready to read another story of Mitch McConnell ever doing the opposite of what’s best for the country, but instead I’m reminded that he’s backed by a whole party dedicated to that.

Good on Blumenauer for trying, at least.

I stopped reading anything related to federal legislation a long time ago. The House keeps passing highly partisan bills they know won’t get passed in the senate, and vice versa, and each blames the other. And they’ve doing this since Jimmy Carter was president.

The CARES Act was the last major legislation with any substantial bipartisan support. The last 6 House transportation bills that passed had no House Republican support whatsoever. The Senate transportation bills that passed had no Senate Democratic Party support whatsoever either. Both parties are waiting until after November 3rd to even think of working together, when each party no doubt expects to be swept into power (keeping in mind only a third of the senate is actually running). And equally no doubt, most members of both parties will be re-elected and we’ll have the same gridlock in congress no matter which “elderly nutjob” gets elected president.

I can’t buy into your fatalism, David. People of good will who are trying to do the right thing need to continue to try to do the right thing. What’s the alternative? Remember that Putin and his acolytes want us to think “everyone’s bad,” which simply advances the goals of those who want to hold onto power.

Fred, my response above was to a fair popular partisan comment made by John Lacrettes which has since been removed; in fact all his responses on other threads have been removed from other unrelated conversations – it’s an odd strange policy for JM to allow for any comment removal long after the fact, it messes up the context of other peoples’ comments.

As for my fatalism, it has more to do with the federal congress and presidential system we have (and will continue to have for quite some time) which I find very corrupt, by both major parties. You’ll find that I do quite a lot of advocacy on the local and state level, and even engage federal bureaucrats. Protesting is good, but it works best when followed up with (or in conjunction with) voting regularly and often, engaging in civil discourse (such as on BP or with friends and colleagues), and working in concert with other members of the community on common goals and projects.

I just drove up N Greeley. I only go down that way when driving, which I don’t do much, and noticed that it sure seems like the bi-directional bike lane under construction is going to be protected from the roadway by full sized 3-4′ tall concrete barriers. This barrier is staying right? It’s not just for the construction guys, then they’re taking it away?

I know this doesn’t particularly belong here but I’m really curious. The last spec I saw had a simple curb or plastic wands or something.

Earlier BP had a report about this project (and lots of comments of course.) https://bikeportland.org/2020/06/11/pbot-north-greeley-bike-path-to-be-completed-mid-summer-316688

But note that last time I rode down Greeley, the shoulder on the right side (towards the railyard) of the road had been eliminated by restriping, so you had to ride on the left side. However, the connections at the bottom of the hill haven’t been built yet, so at the bottom of the hill you need to cross Greeley again to get to the shoulder and get on to Interstate. Sigh.

Does anyone have an update on the HR 4001 Bikeshare Transit Act status? (It did not get passed by the House yet, so should we assume it is dead for this year or is the Senate working on a similar bill to include in the INVEST Act 2019?)