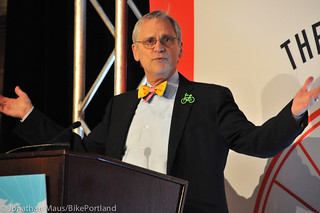 It’s transit, so let’s fund it as
such says Blumenauer.
(Photo © J. Maus/BikePortland)

Not wanting to be left out of massive bike news in his hometown, U.S. Congressman Earl Blumenauer has just released details on his latest legislative idea: the Bikeshare Transit Act. The legislation is meant to provide stability and “additional flexibility to use federal funds for bikeshare programs.”

Blumenauer wants to make it easier for bike share systems to operate past their initial start-up funding. In Portland’s case, we received a $2 million federal grant for bike share back in 2011. But that money was only enough to start planning. To actually put a system on the ground would take millions more — not to mention an annual operating and maintenance budget of $1.5 to $2 million. With cities under pressure to not spend any local money on bike share, that means they’ve had to hope and pray for big private sponsors. Portland spent years trying to court a suitor before inking their $10 million deal with Nike.

Blumenauer says this uncertainty is due to a lack of a federal funding source. He’s right. When TriMet wants to build a new MAX light rail line they can tap into the New Starts program run by the Federal Transit Administration. There are similar set-aside funding programs for highways, streetcar, aviation, and so on. But for bike share — which is something increasingly being considered a transit system — there’s nothing.

Here’s more about the legislation from a one-pager released by Blumenauer’s office:

The Need for Legislation

America is in the middle of a bikeshare revolution: 13 new bikeshare systems launched in 2014 and 11 more launched in 2015, bringing the national total to approximately 80. More than 10 million people rode a bikeshare bicycle last year. Systems are opening in large metropolitan regions like Washington, DC and New York, as well as smaller communities like Dayton and Boise. The increased commercial investment around bikeshare stations and networks drive economic development in these communities.

Some of these existing bikeshare programs received federal monies to get off the ground, but the lack of an established funding source has proved an impediment to other projects across the country. Since the term “bikeshare” is not defined in U.S. code or described by law as a form of transit, bikeshare systems and transportation officials alike now operate in a gray area. Congress needs to act to clarify that bikeshare projects are eligible for federal funding, providing certainty to investors, business-owners, and commuters.

This legislation will eliminate this gray area by defining bikeshare in statute and making bikeshare systems eligible to receive funding to enhance related public transportation service or transit facilities. They will also be listed as an eligible project under the Congestion Mitigation and Air Quality Improvement Program.

Additionally, the Bikeshare Transit Act will allow federal funding to be used for acquiring or replacing bikeshare related equipment and the construction of bikeshare facilities.

Blumenauer says he has bipartisan support for the legislation along with endorsements from the American Planning Association, American Public Health Association, The League of American Bicyclists, North American Bikeshare Association, PeopleForBikes, and Transportation for America.

Identifying dedicated federal funding is a good idea regardless, but what’s weird is that bike share programs are under pressure not to use local funds. What other public service has this constraint? We spend local money on roads, streetcars, light rail lines, protected bike lanes, etc. but for some reason bike shares are excluded. Why is this? Maybe because people erroneously think that bike shares are toys for the rich and tourists? I don’t have the answer to this, but it just seems wrong to me.

that’s because it is wrong. and it’s dumb. It’s a byproduct of politicians who have made the calculation (an incorrect one, IMO) that talking confidently about cycling’s value and benefits will cost them votes.

i’d love to see a prominent local leader stand up and embrace cycling and taunt and engage with anyone who tries to make that embrace controversial.

Earl does a great job of this at the national level, however there’s really no bike champion at the local level. There’s lots of them at PBOT and various other city/regional bureaus, but unfortunately none that hold public office. Leah Treat is probably the closest one we’ve got, but unfortunately her hands are frequently tied by the political process.

This is very good news…but there are some loose ends that need to be included:
– include secure bike parking facilities with bike share effort (serve citizens with bikes and without – aka ‘both sides of the coin’); and
– reform the FTA calculations to fully allow and credit first and last mile trips to transit provided by bicycles (bike share and privately owned) to transit stations and park and rides…this would then support bike park and rides. (This was not the case the last time I looked into it…back in the CRC planning phase.)

The avoidance of spending local money on bike share is quite easily explained…finite budget dollars and higher priority spending needs. While some might wish to ban cars or to make it extremely expensive and difficult to drive cars, the fact remains that the general public prefers car ownership to transit and biking and local government spending properly reflects this popular choice.

What’s really interesting here is why Earl believes it is aporopriate for residents in Iowa, Florida, Texas, Wyoming ought to be funding bikeshare programs in Portland if Portland residents are not willing or able to fund such a program. What underlying rationale makes this a sensible approach?

Bikeshare programs are worthwhile, but the general public is not convinced that either a) we divert tax dollars from existing priorities; or b) tax ourselves more to pay for it. That is neither wrong or dumb, it’s simply a position that doesn’t conform with Jonathan’s opinion or the opinion of many here. And to attack those who disagree you as wrong (merely because you disagree with them) or dumb (avain because you disagree with them) not only corrodes civic discourse but also is highly unpersuasive.