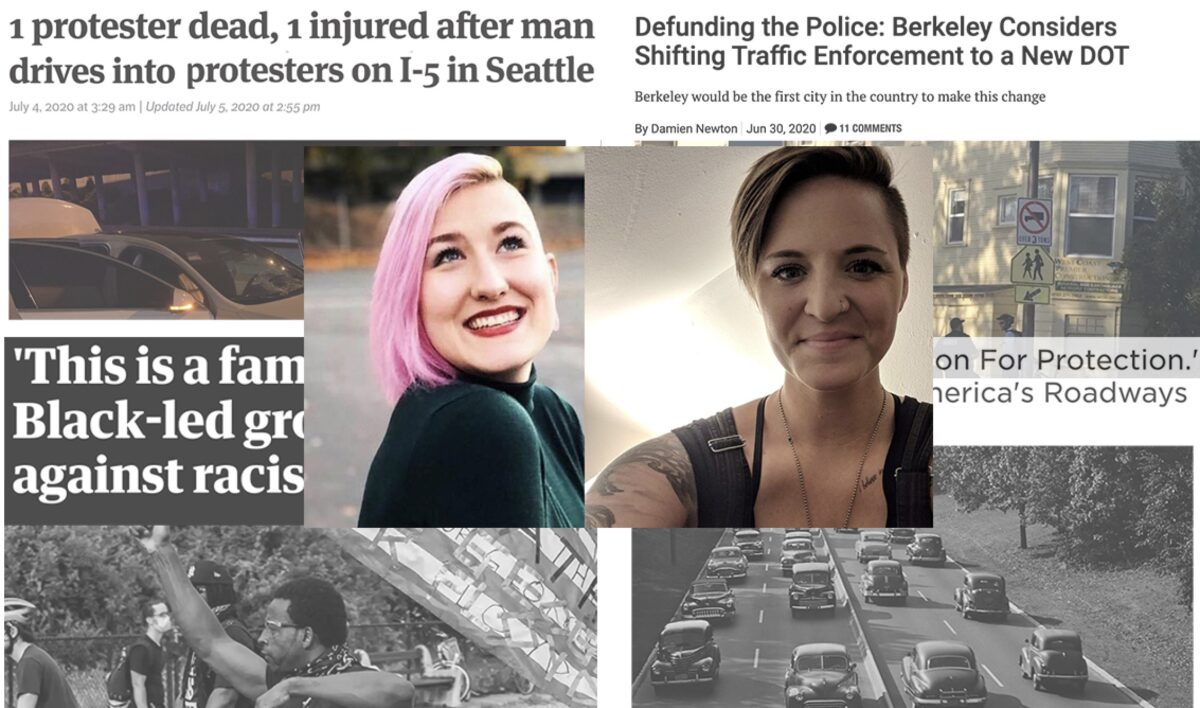 Vehicular violence: A man sped past a closed section of freeway in Seattle and intentionally drove his vehicle into peaceful Black Lives Matter protestors. He hit two people. One person, Summer Taylor (on left in lead image), died from their injuries and the other person, Diaz Love, is still hospitalized. Seattle Police arrested Dawit Kelete and charged him with two counts of vehicular assault.

No more traffic police, Part 1: A budget proposal in Berkeley, California could make them the first city to redirect traffic law enforcement funds away from police and toward unarmed city staff.

No more traffic police, Part 2: City councilors in Los Angeles have also proposed taking traffic law enforcement out of the hands of armed police. Their proposal would increase the use of automated cameras and use department of transportation employees to issue citations instead of armed cops.

Self-enforcing: There are a lot of traffic laws that make no sense for armed police response. This article from Fast Company says automated cameras and better infrastructure design could help further minimize the need for police.

French faux-pas: The Government of France is so afraid of the e-bike revolution they forced VanMoof to stop airing a brilliant ad (below), saying it denigrates the auto industry and creates anxiety among the populace.

Racism in transportation goes national: NPR’s Weekend Edition show featured a segment on how America’s transportation system is rooted in discrimination against Black and brown people.

Relax, don’t pass: A study based in Portland found that there was no significant increase in congestion or emissions when people in cars opted to wait behind bicycle riders on roads without bike lanes, instead of passing them dangerously.

Riding for justice: “We’re like the moving billboard for Black Lives Matter. We can literally take it from borough to borough, all in one day, and make our message heard,” the leader of Brooklyn-based Street Riders NYC told The Guardian about the booming popularity of their protest rides.

Video of the Week: Street Riders NYC via Streetfilms

I’d be surprised if it were nearly that high given that they’ll just catch up with the next vehicle a few seconds later.

Blows my mind how many people will do a fast pass literally a few yards before encountering a line of stopped cars — i.e. I wind up passing them back literally less than a 1/2 second later.

Yep… A few of the most dangerous passes that have happened to me were from drivers that apparently can’t see any further in front than the next thing in front of them (which was me at the time). If they had noticed the line of cars stopped at the light about 75 yards ahead maybe they would have waited the extra 5 seconds for me to get out of their way. One guy almost hit a bus coming the other way because he was so concerned with getting to that red light a few seconds earlier.

Middle of the Road Guy
Reply to  Kyle Banerjee

I think it is the psychology of the issue. For instance, I notice that when I am stuck behind a large truck, I want to get around it just to have better vision (put a hazard behind me). It’s possible the average driver sees the cyclist as a potential risk and wants to do the same.

Personally, I would support the widespread use of traffic enforcement cameras. I would likely end up with a few citations, although I make a conscious effort to follow all traffic laws, sometimes I slip up. However, when cycling, I feel much safer if motorized road users are held accountable for their actions.

Chris I
Reply to  Matthew in PDX

The thing is, if 100% of the streets in the city have traffic cameras, “the flow of traffic” will always be just under threshold where you are mailed a ticket. If a trip from Gresham to Portland via surface streets at 10mph over the speed limit results in 30+ tickets getting mailed to you, no one is going to speed after the first few weeks.

I have mixed feelings about these.

On one hand, I believe they have a role to play. On the other, these things distract too many drivers away from other road users and evolving situations.

The purpose of enforcement should be actual improvement of safety, not punishment. Greater compliance with road rules is correlated with safety, but they’re not one and the same thing. There are places and ways to deploy them that would probably help, I definitely don’t favor them everywhere.

If you are too distracted to spot a Speed sign or learn what a reasonable travel speed is, you have no business driving a two-ton machine capable of driving 100 mph and killing innocent people on a public street.

People have become so self-absorbed and self-important and enforcement and punishment have become almost non-existent, safety has been decreasing. If it were not for the significant improvement in safety technology in cars (seatbelts, air bags, anti-lock brakes, crumple zones in the vehicle, etc) we’d have lots more fatalities.

We need some serious enforcement and consequences. It seems to me with that increased safety, especially for those not in cars, will take some punishment to change behavior.

I think the CHOP up in Seattle is a good demonstration for what happens when there is no enforcement of laws – shootings, assaults,etc ( https://www.cnn.com/2020/07/05/us/chop-seattle-police-protesters-public-safety/index.html). Traffic laws are the same. If you don’t enforce them we are left to people using their own judgement and based on what I’ve seen with Covid and places like the CHOP, a lot of people have very poor judgement and the most vulnerable road users lose. I’d love to see enforcement cameras at every intersection.

Yes, and with the new facial-recognition technology, we’ll be able to identify and prosecute jay-walkers, pedestrians who cross against the signal, and bicycle red-light and stop-sign runners, not to mention people who aren’t wearing masks and any other undesirables in our society.

That’s my point of hesitation with more automated law enforcement. Nearly every law/technology written/deployed for one purpose has inevitably experienced “mission creep” and been applied much more widely than originally intended.

There is no right to privacy in public spaces. There are already millions of cameras all over the country. If you want to use public roads you are not supposed to be anonymous, you are supposed to be responsible for your actions.

Middle of the Road Guy
Reply to  Jon

Unless you are protesting things.

Middle of the Road Guy
Reply to  J_R

Absolutely. Some things should be painful.

Per “Government of France is so afraid of the e-bike revolution”: related to this is that the French government is fearful that with an environmental push to lower demand for automobiles then this along with the recent flood of Chinese built (lower cost) cars that the French will loose another leg of its industrial / tech institutional foundation…gone like its language dominance. These loss of jobs will likely hit the “yellow vest” population thus creating additional rebellion in its middle tier cities/ rule

The VanMoof video is brilliant! Video of the month!

Clark County Bike Boom: North Carolina, like Oregon & Washington, is a state that requires masks in all places where social distancing is impossible, though our actual compliance rate is probably a lot lower than that in the Pacific Northwest. The biggest set of exceptions to all our new state Covid-19 laws and local executive orders has been related to bicycling: officially no masks are required nor confinement at home as long as you are riding recreationally (and who’s going argue if you aren’t?) So we too have seen an unprecedented increase in bicycling, sales, and parts shortages, especially as we don’t have Portland’s wondrous weird tradition of informal parts sales and supply (i.e. illegal chop shops). I work locally with a nonprofit that gives donated bikes to local immigrants, refugees, and inner-city youth, and we’ve seen a huge steady surge in bike donations since late March, far greater than most years; as with Bike Clark County, we’ve even sold enough of the nicer bikes to pay for our program for the rest of the year and into 2021 (we are all-volunteer without paid staff.)

That would make NC the first state I’ve heard of that made rules specific to bicycling.

I think most states and localities with mask requirements have carved out a general exception that they are not required in outdoor spaces where you aren’t among crowds. Here in Minnesota the governor’s and mayor’s various stay-at-home and mask orders have mentioned cycling, but as an *example* of allowable outdoor activities along with running, hiking, boating, etc., not as an explicit exception to the rule. Just because rollerblading and windsurfing aren’t specifically mentioned doesn’t mean they don’t qualify too.

The City of Greensboro NC specifically called out bicycling as unrestricted for exercise back when we had the stay-in-place orders in April, long ago rescinded. Greensboro is not noted for being innovative, so they likely borrowed their city rules from other larger cities.

The state of North Carolina doesn’t call out bicycling specifically, but still allows exceptions that imply bicycling:
C. Exceptions. This Executive Order does not require Face Coverings for-and a Face Covering does not need to be worn by-a worker, customer, or patron who:
4. Is strenuously exercising; or
10. Has found that his or her Face Covering is impeding visibility to operate equipment or a vehicle; or…
https://www.greensboro-nc.gov/home/showdocument?id=46057

According to some French commenters on another cycling website, it’s against French law for an ad to attack other products, so they could have legitimate reasons for banning the VanMoof video. However, their response didn’t appear to address this part of it, so it really does make the decision seem more questionable. Good publicity for VanMoof, though!

I can understand the prohibitions on attacking specific competitors’ products, and on appealing to suffering and anxiety (which is not to say I’d want to see these free-speech limitations in the US), but still this ban seems like a stretch.

Re: Vehicular Violence … I’ve been glad to see BikePortland covering the story of protesters being attacked with deadly vehicular weapons, really from the start of the George Floyd related protests, when hardly anyone else has been covering it. The Guardian ran a story about a month ago, and they have now posted another: https://www.theguardian.com/world/2020/jul/09/black-lives-matter-drivers-target-protesters-spate-of-attacks. I think the trend has been going for a few years now – we had a high-profile incident here in Minneapolis during the Dakota Access protests, for example, though there were no fatalities in that one – but it is hard not to conclude that the trend is much worse this time.

I hope increased awareness of this problem is followed by toughened-up laws. Fortunately Washington has a vehicular homicide statute, and it’s my understanding that Summer Taylor’s killer will be prosecuted under it. (Full-disclosure side note: I once served on a vehicular homicide jury in King County. The law is usually used for DUI fatalities, but can be also used in reckless driving incidents).