An awkward and dangerous intersection on the Hawthorne Bridge is set to get a major makeover. Portland City Council is expected to authorize an agreement between the Portland Bureau of Transportation and Multnomah County to build the Hawthorne Bridge Traffic Signal Improvement Project. (Project plans available in council ordinance PDF here.)

The signal will be located at the top of the on-ramp from northbound Naito Parkway that feeds onto the eastbound Hawthorne Bridge. If you’re one of the 3,000 or so daily bike riders who pedal through here from downtown to the central eastside, you know this intersection: It’s where drivers often illegally block the bike lane as they peek at oncoming traffic, forcing bicycle users to swerve around or wait until they move out of the way. Currently the intersection has a stop sign for drivers coming up from Naito and no stop sign for people using SW Madison.


“A signal here would reduce vehicle delay at this location and create more regular, predictable and less stressful vehicle traffic flow for automobile traffic accessing the Hawthorne Bridge,” wrote PBOT in a project description from 2016.

Council is set to approve a $242,090 payment to Multnomah County (who owns and maintains the bridge) for construction of the project, which is just one element of the $8.9 million SW Naito Parkway Project and will be paid for through a combination of funds from System Development Charges (SDCs) and the Fixing Our Streets program.

In January 2018 PBOT released a short video that illustrated how the signal would impact auto traffic:


Based on the final plans from PBOT (see images), there will be a near-side signal and stop bar for drivers on the Naito ramp well before the painted crosswalk and bike lane. The new signal should make this intersection much less stressful and more predictable for everyone.

The signal project is expected to be completed by next summer.

For many years during rush hour, there was a guy who sat in that little island between the ramp and the bridge and played the trumpet wearing a suit and mickey mouse ears. At least in my mind, he added a human touch and somehow made that tricky intersection gentler.

That was “Kirk Reeves. A legend and wonderful guy and respected musician. He passed away in 2012 unfortunately. You can see an amazing mural of him on the southwest corner of NE Grand and Lloyd (Dutch Bros). 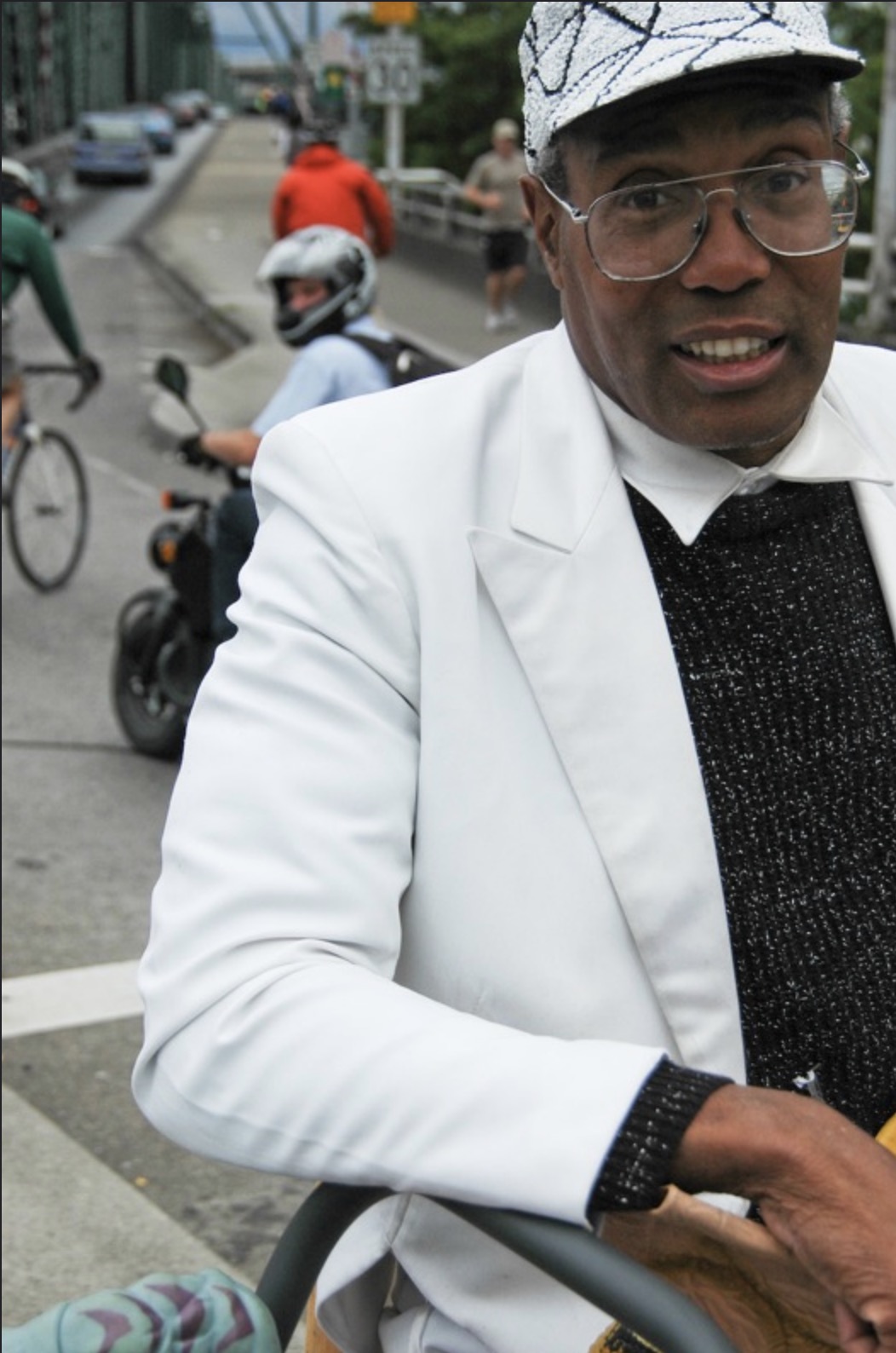 Is it safe to assume then there will also be a signal that stops people on bikes so a stream of cars can proceed? It seems to me like this signal installation is prioritizing movement of cars over movement of people.

There will necessarily be traffic signals to stop eastbound drivers approaching the intersection. In the drawings it looks like there is a separate bike signal for eastbound bike traffic as well. Given the volume of eastbound traffic coming off Madison onto the bridge, I expect bike traffic on that approach will get plenty of crossing time.

I’ve asked PBOT for a clarification about the placement of all the new signals. I will update the post when I hear back.

John is correct. B is signal head type bike, V2 for example is red ball, yellow ball, green ball. OLA stands for Overlap A, an overlap runs with a single or multiple phases.

Page 39, Sheet ATS-2 shows the phase diagram. The left most lane Madison approach is phase 2, right lane is phase 6, the ramp is an Overlap B driven by Phase 5.

Phase 2, left lane, will always be green unless there is a bridge lift. Phase 6, right lane, alternates with phase 5, the ramp. The bike and pedestrian movements will run concurrently with Phase 6, the right lane.

Ignore Phase 1 & 3 as they have to do with bridge lifts and temporary closures. Bonus, during a lift the bike and ped movements will be green while the vehicle movements are all red.

It depends on whether your priority is safety or speed. The best practice in the most bike-friendly places in the world is to provide separate signal phases for bikes and cars. That’s what this does. Yes, it means sometimes bikes will have to stop. But that’s better than the high-conflict, unsafe, and uncomfortable situation there today.

My memory from an open house a few years back was that the signal will be timed so that if you have the green at 1st / Madison you will have the green by the time you get to the top of the ramp.

Timing will be everything; it would be super annoying to have to wait at that signal when riding from downtown onto the bridge. But if it’s timed right, it should provide some benefit.

It shouldn’t be too bad. The only rational signal phasing would be to have the Naito ramp traffic get a green while Madison has a red at 1st Ave. So most bicyclists wouldn’t have to stop.

Great to see this improvement; I hope drivers follow the new signal after so many years of stop-and-gun-it. Now if they could fix the OTHER (east) side of the bridge, where cars speed across the exit ramp onto 99E/Grand, I’d feel doubly safer.

PBOT installed (2) No Turn on Red signs on SW Clay at Naito last year but based on my observations the compliance rate is abysmal. I would expect that drivers who currently travel this route onto the Hawthorne Bridge will not notice the No Turn on Red sign at all.

It’s probably out of budget for this project, but something like a railroad crossing gate would be nice to prevent turns on red in locations that have shown low compliance rates

While I agree some people will continue to pull bad maneuvers, I think a lot of people will be relieved and wait for the light to turn rather than make a tenuous maneuver. Most of the time it looks like the driver trying to make that merge is just as nervous as I am.

If they sync the timing of it with the other downtown lights (which makes sense they would) I’m going to guess slower riders will struggle to make it up that slight incline in time and be stuck waiting at both lights.

Another Engineer
Reply to  idlebytes

It would be highly unlikely to hit a red at both lights. There’s 380ft between signals at 13mph or 19ft/s that’s 20s offset. Then you have the length of the green light, let’s say 20s. That gives someone 40s to clear the light after coming to a stop at Madison and 1st and recieving a green. In this example, someeone traveling at an average speed of 6.5mph would clear both lights.

idlebytes
Reply to  Another Engineer

I appreciate the math. I’m curious how you arrived at 380ft? Google maps estimates between 2nd and 1st it’s 260 feet and between 1st and where the ramp intersects with the eastbound approach is 450 feet. If it’s 450 feet that comes to 15.3 mph to clear the light in 20 seconds or 7.6 in 40. I also don’t understand why you say “the length of the green light is 20 seconds then immediately state the person has 40 seconds to clear the light. I don’t believe the lights downtown are timed such that the one at 2nd turns red as the one at 1st turns green happy to be wrong though that’s just been my experience.

Another Engineer
Reply to  idlebytes

I originally excluded 2nd and Madison because the grade is downhill and I was more interested in the new stretch between 1st and the ramp. As you increase the number of signals you look at the closer you will get to needing to go 13mph but things differ if you are looking at hitting two red lights in a row. This assumes you hit a red light at the starting intersection either, 1st or 2nd.

For some reason I excluded the intersection width of 1st and Madison – I agree its closer to 450 feet between 1st and the ramp. At 450 feet the offset between 1st going green and the ramp going green is 24 seconds when timed at 13mph like the rest of the Downtown core. The person leaving 1st has the length of the offset plus the entire length of the green light to clear the ramp intersection. I estimated the green at the ramp to be 20 seconds but it could be higher in the peak hours. That gives a person leaving first at the start of the green with 44 seconds to clear the intersection at the ramp before it turns red. Equivalent to a speed of 7 mph, 450 feet / 44 seconds * 0.682 (mph/(ft/s)).

The lights downtown are timed on quarter cycle offsets meaning as you travel along a street every fourth light is doing the same thing. The light at 1st and 5th go green and red at roughly the same times. This works because the block spacing in the Downtown Core is standardized at 280 ft. Because the new ramp signal is 450 ft away it won’t be able to be timed with a quarter cycle offset so I just assumed the city would keep the progression speed the same at 13mph. Blog post on the subject is here: http://koonceportland.blogspot.com/2010/10/portland-tribune-article-on.html

Hopefully they will also add a bike lane to the eastbound bridge on-ramp! Trying to get from light at Columbia/Naito to the bridge at rush hour is currently a choice between finding a gap in the line of waiting cars, riding sandwiched between the curb and line or cars, or dodging all the runners and walkers on the sidewalks in the park.

Long overdue. But I’m glad that PBOT is being proactive and not reactive here, tackling the problem before a serious injury or death occurred (which I’m frankly surprised hasn’t).

They should make this ramp available for bikes and pedestrians only and let cars simply make a right-hind turn from Naito. Having highway-style ramps for people driving is not consistent with safe driving. This tortured signal proves the point! It is not necessary, just prohibit cars from using the ramp and skip this expensive signal project.

I’d rather have this one signalized ramp than force more cars to go through multiple narrow downtown streets (creating more conflicts with cyclists and pedestrians) to access the bridge.

Can’t go right from Naito, as you’re under the bridge at that point; you’d need to detour over to 2nd, then make a right from there.

…the drivers could just wait for the County to build the new connection. 😉

The scarier intersection is the other side of the bridge where cars get on mcloughlin. There’s dividers, big yield signs, and I’ve still seen people hit by cars that assume all the signs are for everyone else to yield.