If you’re new to BikePortland I’ll forgive you for not knowing who Alan Koch is.

Back in 2005 I heard about a guy who was on a quest to ride his bike on every single public paved street in Portland: cul-de-sacs, dead-ends, everything. It was an impressive goal. The fact that Alan was 65-years-old at the time made me even more interested to meet him.

After our first ride together I was a fan for life. There he was, in the cold of January in a matching red tracksuit, carrying around tiny pieces of paper he’d printed out with his portion of the map for the day in one hand, and a pen to mark his progress in the other. (For all of you youngsters, this was long before bike computers came with maps inside them.) Alan didn’t have any lofty intentions. He wasn’t raising money for any cause, and he most certainly wasn’t looking to become famous.

It was an honor to join him again in 2012 to cross the final few miles off his final piece of map.

“I only get in about three miles a day and the rubberized track is a bit slower than asphalt so I can only get it up to 21 mph (LOL).”

After that I didn’t hear from Alan much, beyond an occasional email with samples of his amazing bird photography (he was an aerial photographer for the US Forest Service before he retired). I finally heard from him again today. And guess what? He’s still riding.

But it hasn’t been easy for the now 80-year-old to keep his cranks turning.

“I quit riding in the metropolitan area after you went on that last ride with me out in Oregon City,” he shared. “By that time I had started to feel really uncomfortable with the increasing auto and truck traffic.”

Today Alan lives about a mile south of the Springwater Corridor in the Linwood neighborhood of Milwaukie. Proximity to this carfree path made it his go-to place to ride. But recently he stopped riding there too. Traffic en route had gotten worse and he had troubling run-ins with people who live alongside the path. “I had several incidents there,” Alan shared. “Including a blocked pathway by groups of the homeless and needles on the pavement.” 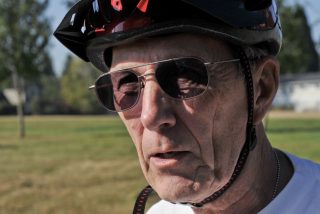 Undeterred and determined to keep riding, he found a half-mile piece of pavement in nearby North Clackamas Park (which he mentioned required only 200 feet of travel on a high-traffic road). Not happy to just putter around and still looking for speed, Alan said the path in the park was too narrow and too busy to get a consistently good cardio workout and reach the 22 mph speed he prefers to ride at.

His search for a place to ride continued.

These days, with school closed due to the coronavirus outbreak, Alan’s riding on the track at Alder Creek Middle School, which is only about 200 feet from his house. “I only get in about three miles a day and the rubberized track is a bit slower than asphalt so I can only get it up to 21 mph,” he shared with a “LOL”.

And because he’s very vulnerable to the virus, he keeps at least 10-15 between himself and anyone else on the uncrowded track

About his current routine, Alan said, “It’s boring me to death.” But knowing Alan, I bet it’s also one of the things that still gives him life.

Keep on riding Alan! And when this whole pandemic thing blows over, I’ll meet you on the track.

At 69, Alan’s my new role model. Won’t attempt riding every street, but will try to keep cycling as long as possible. Use it or lose it!

I think about Alan, from the 2005 story, every time I’m on a road I have not yet ridden in Portland. I’m not intentionally riding every road, but love an opportunity for a new route. I should start keeping track.

Alan I have the same aspirations. I grew up in NE Portland and when I moved to the west side in 1997 I pasted the Thomas maps together and rode every street out west. Eventually I rode most everything out as far as Vernonia on the west side. On the east side, I didn’t do every street but my Strava heatmap sure looks like I did a lot of them. I lived in Southern Spain for 4 years and rode nearly everything around…paved, trails, orchards, etc. Now I am retired in Guadalajara, Mexico and I have been specifically trying to ride every road here. I’ve already done over half of the city and this city is huge…with 7.5 million people so it is a serious challenge. I hope to keep going as long as Alan!