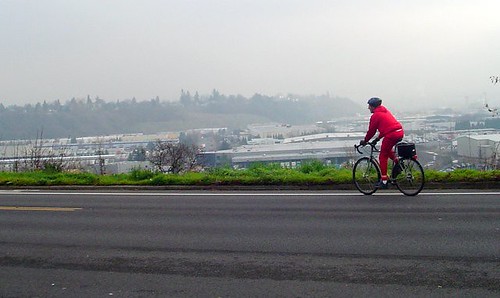 Remember Alan Koch? I first heard about him in the Oregonian a few weeks ago. He’s the 65 year-old retiree who’s on a quest to ride every street in Portland. I was lucky enough to catch up with him on a recent jaunt around North Portland. 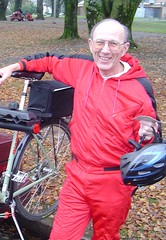 He doesn’t usually ride when it’s below 50 so he got out his trusty red jogging suit to fight the chill. It worked pretty well (and looked damn stylish!), but we both agreed it was each other’s company that kept our minds off the frosty air.

We zig-zagged through neighborhoods, rolled down and around every cul-de-sac and stopped every few blocks to mark where we’d been and where we should go next. It was all very methodical and sort of strange to ride like this. I’m used to making nice big loops, or just getting from A to B. Without the friendly banter and sheer novelty, this kind of riding would have driven me crazy.

But for Alan, it’s the way he always rides and it’s become second nature. He’s comfortable talking and looking at his map while we ride, with his trusty pen always in hand. He says “hi” to everyone we see, he stops at (almost) all stop signs and uses the proper hand signals when he turns. Every once in a while, he’d spurt ahead from a stop and leave me a half-block behind.

He’s a simple guy. There’s really no deep philosophical reasons for his quest. He’s just riding. Sort of reminds me of Forrest Gump in that running scene. 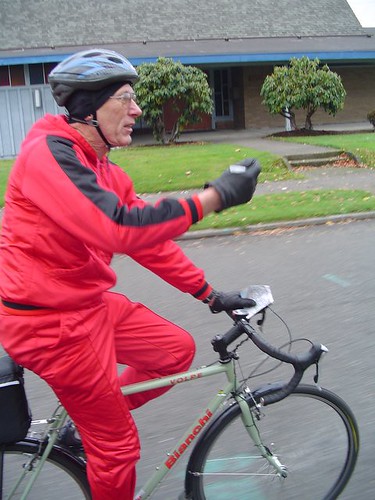 He’s done about 2000 miles since last January and he’s not quite sure when he’ll be done. He just emailed and said all roads east of the Peninsula Crossing Trail are complete. Now the entire West side and famous Skyline climbs await.

Good luck with the roads ahead Alan. I’m sure our paths will cross again.

So does he have to ride the full length of each street, or just some segment of the street? Can’t imagine how he does some of the arterials.

He said on some busier streets he’ll ride on the sidewalks (yes Greg, I told him how dangerous this is!). But yes, he rides the full length of each street. The only thing he doesn’t do are freeways and freeway on-ramps.

Remember when you get to the west hills where I live there will always be a rest break available! To those of you with “dirty” minds, I am a good friend of Alan and Gloria’s!

This is fascinating and I respect his effort. Can anyone send me Alan’s contact info? (you can email me through my website). I am researching Portland streets and would love to chat with him.
Thanks

Puts my little goal to shame.

Earlier this year I creatred a 20+ mile Bike ride for the city I lived in at the time, Costa Mesa, Ca., and posted a story about the ride, with route description.

I have the notion of creating rides for each city in Orange County, as time permits.

Maybe you could check back with him, Jonathan, when he’s riding the west side. He often won’t have sidewalks (or bike lanes) as options.

Alan’s quest has inspired me for a new bicycling goal. I am not retired so I will save biking every street for 30 years from now, but in 2005 my goal is to ride every (safe) colored street on the Bike There Map. I am avoiding the red ones for my sanity and safety. I will start on the East side and work my way over to the West side as my stamina improves. Anyone with me? Because of my schedule, I will probably mostly be doing this on Saturday mornings.

After that the only thing left to do will be to ride every bus route that offers bike transport on the front of the bus.

I’ve been on every street in my city, but not the entire lengths of them and we only have 300 miles in my city of 81,000 (or is it 600 miles? I forget). I’m guessing Portland probably has about ten times that mileage.

I haven’t ridden every bus route in my city 🙂

this guy is my hero!

Hi Alan,
I guess that Gloria sent this to me and I find your goad to be very impressive. What ever possessed you to do this?
Good luck with your goal and I am sure that Gloria will keep her cousin in CT updated with new emails and photos.
Regards,
Dennis

Many thanks for all the kind comments! I will be keeping Jonathan posted on my progress. This weekend may find me riding the industrial areas up toward Kelly Point. I leave the heavy auto and truck traffic areas for weekends.

Hi Alan,
Wow! You are going to be famous.
I am very proud of my big brother.
Please be careful. Some of those really busy streets might be better ridden at night. You could have Gloria drive behind you and block traffic.
Keep wearing the red jogging suit. Everyone will be keeping an eye out for you.
You will get such a reputation, they will close down the freeways for you.
Cheryl

Hi Alan:
Wow, it is great to see a classmate from Clackamas High School so active and vital with this project.

I wish you the best of luck in this endevor and stay safe.
Jim Harding

Hey, what a lofty goal! I’m proud to say I knew you when–fellow Clackamas High graduate and Forest Service retiree.
Keep the shiny side up! 🙂

Way to go Dad! How come you’re in better shape than your darling daughter??? 🙂
Luv ya!