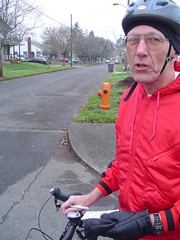 Back in December I shared the story of my ride with Alan Koch. Alan is a retired photographer who’s on a quest to ride every single mile of paved road in the City of Portland.

Despite some setbacks—including a fall from his bike which took him out for 5 weeks—he has just completed a major milestone and has now ridden every road in east Portland!

From the Willamette River way out east to 185th and from the Columbia River in the north down south to the Clackamas County line.

He is now working his way from north to south on the West side of the river.

In his own words, here are a few highlights (and a lowlight) from his rides so far. 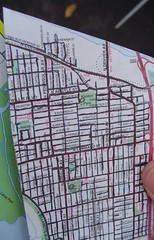 “NW Greenleaf between NW Cornell and NW Skyline. It is a beautiful winding 1 1/2 lane wide smoothly paved road that climbs through deep forest and fern with only a few signs of civilization. I have ridden this road twice and have only met one car (easily detected around the blind curve because it broke the absolute silence). A bonus for this climb is that it puts you at the crest of NW Skyline where you can choose to make a nice downhill run either to the east or west.”

“Following a doe and her spotted fawn uphill on a narrow road near Pittock Mansion in NW Portland. They stayed on the road in front of me for about a half mile before moving off into the brush. Also saw a doe and her twin spotted fawns munching on someones landscape ornamentals on NW Hazeltine Street.”

“Being followed by an 18 wheeler as I rode downhill in the West Burnside tunnel. WOW! The noise it made while using its Jake brakes inside that tunnel made it sound like it was about to run over me. It probably was never a close as it sounded but I turned off onto a side road as soon as possible just in case.”

Congratulations Alan, we all wish you the best of luck and please keep us posted on your progress!

Congrats, Alan! Now how about all of those unpaved “unimproved” roads? 🙂 If you have a rear-view mirror you’ll know just how close those trucks are.. (doesn’t make it any less frightening, though!)

Way to go, Alan! Keep us updated on your progress.

As long as the road is shown as a double line on my AAA map I ride it. That includes the gravel (and sometimes dirt) ones too. In fact, I have ridden on many roads that are so potholed that I wouldn’t risk driving my low slung Acura down them. In a few cases the map shows a road where there is absolutely no improvement to the right of way and I have to bushwack my way through. There have been times when I had to walk the bike through brush, over very loose gravel, or up/down a staircase.
West Burnside pavement is so rough that I doubt I would have seen anything other than a vibrating blur in a mirror. Also, I was giving full forward looking attention to miss the rough spots while speeding ahead to the first turnoff. I took the road to the south just after leaving the tunnel.
Thanks for the congrats! I will be riding the hills west of Pittock Mansion today.

I’d love to check out those dirt and gravel roads. I plan to lead an unimproved road ride for city mountain bikers..the bumpier the better. I’m going to consider the east side only, west of 205 and north of Powell. So far the most in-city off-road fun I’ve had was on NE Wygant St. between 21st and 33rd..a Last Thursday escape route.