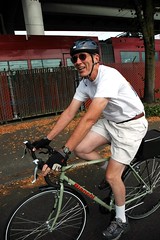 Three years ago, 67 year-old retiree Alan Koch set out on an ambitious mission: to pedal his bike down every street in the city of Portland.

What started as an escape from boredom and an outlet for his adventurous spirit, ended Sunday with a short ride through downtown Portland. We’ve kept in touch since I rode with him back in December 2005 and I joined him on this final ride.

We met at Wallace Park in northwest Portland. As usual, Koch starts at a park (they usually have public bathrooms) and also as usual, he only rides in downtown on Sunday mornings (to avoid traffic).

As he took his green Bianchi Volpe off the rack he told me he’s already started riding streets in neighboring cities,

“I finished Lake Oswego Thursday and now I’m off into West Linn…I figure I’ll ride all the streets in cities that border Portland.”

He hasn’t decided if he’ll cross the river into Vancouver yet, but I wouldn’t be surprised if he did. 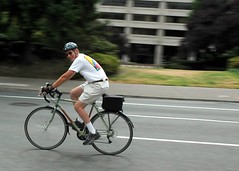 After we chatted a bit, we hopped on our bikes and pedaled through northwest and then up SW Broadway to Madison and ended at City Hall. It was just a mile or two, and there was no big celebration (other than smiles and a hearty handshake), but it capped an amazing and unprecedented journey. 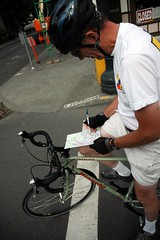 Koch marks completed roads
on a map as he rides.
(File photo)

At the end of the ride, his odometer — which dangled from its mount due to a spill he took on some railroad tracks on SW Boones Ferry Road — showed 4337 miles. Koch says that figure doesn’t include several hundred miles he completed on previous bikes.

All told, Koch figures it has taken him over 300 individual rides to complete his goal.

Koch, who lives in Clackamas with his wife Gloria, seems to thrive on challenges. Not only is he continuing his riding quest, but he’s also volunteered to track down classmates for his 50th high school reunion coming up next year,

“I think I bit off a bit more than I expected…I’ve been going through the phone book name-by-name to find old classmates. I’ve probably made a thousand calls so far.”

I would love to see the look on his classmate’s faces after they ask the inevitable, “So Alan, what have you been up to?”

Here are some more thoughts from Alan about his journey…

“Coming down W. Burnside from Skyline I got pretty scared when an 18-wheeler came up behind me in the tunnel with its Jake-brake on. The pavement was very rough and I just escaped on a side road after the tunnel.”

“Most of the worst, unpaved roads were basically scattered all over southeast.” 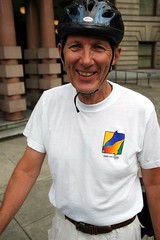 “My biggest worries were thoroughfares that lead into downtown like W Burnside or Terwilliger. Even though there’s a bike lane, the cars are coming very fast… I tried to do all of them downhill because I didn’t want to climb and be exposed to traffic that much longer…but once you get just a few miles outside the city they become far less menacing.”

“Once was on a tricky railroad crossing on SW Boones Ferry Road that resulted in a few bruises. The other time was worse…there was a cable spread across a road near SE Foster that I didn’t see and I ran right into it.”

View more photos of Alan Koch in action in my gallery.

Congratulations Alan! Keep us posted on your future adventures…

For more challenges…Let me know if you would like to ride up here in Vancouver and need one of our new bike maps (to be out in August).

Cable spread across the road? Elevated? On purpose? Whaddafa?

Wow! This fellow will have even MORE knowledge of odd Portland alleys and parks than Shawn Granton. Maybe the two could exchange info, or co-lead a Pedal Potluck Picnic.

I am going to steal his idea and do the same thing! Good job Mr. Koch, I applaud you.

Council Crest and the West Hills must have been a killer.

If only he had one of those fancy cameras attached to his helmet. We\’d have Google Street View for Portland by now.

Hi Alan,
If you head over to Vancouver, I\’m sure we can find some riding buddies for company. Todd offered you a county bike map. You can also pull maps off our website to see commonly traveled roads if you\’d like to start with those: http://home.comcast.net/~roadscholars/

Great ride. If that does not include Leif Erikson road in Forest Park, and if you do not own a mountian bike, I will loan you one for the ride and join you and buy coffee and lunch for you in NW. Congrats!!

Seems that now we can get a good evaluation of the bike lanes in PDX. Worst, best, jokes…etc. Nice rides! Yeah, \”what the\” with the cable across a street near Foster? Sounds like a tweeker trap to get more bikes… aka Wiley Coyote.

Maybe it was strung up by the psychiatrist in Ashland?
http://tinyurl.com/8jfj48s