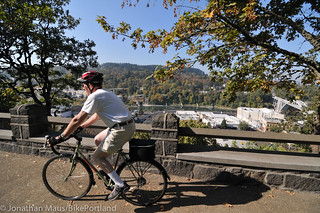 Not many people can claim to have achieved something on a bike that no one else has. 72-year old Alan Koch is now one of them.

Back in 2007, I shared Alan’s story after he completed the Portland portion of his feat. Last week he put the finishing touches on what was always his ultimate quest: To ride all the roads in the 19 contiguous cities surrounding Portland (except Vancouver).

On one of the last sunny and dry fall days of the year, I joined Alan in Oregon City as he pedaled his green Bianchi Volpe those last few miles.

As my bus pulled into the Oregon City Transit Center, I could see Alan waiting on the corner with his bike. He was just as I’d remembered him five years ago; slender and fit, wearing dark aviator glasses (from his flying days) and dressed in a tucked-in white t-shirt and bermuda shorts held up with a leather belt. 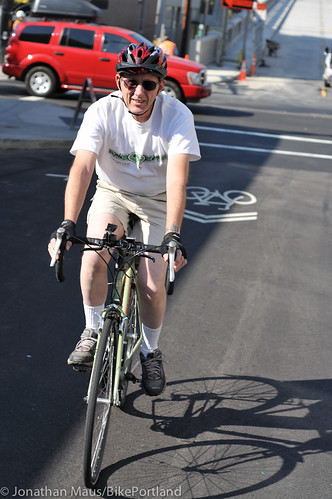 We chatted a bit before setting off on the ride.

After recounting a few close calls he had on his way over (which led him to say, “So, we’re good for the rest of the day”), Alan admitted he’d been “slacking off” in his quest lately. His wife Gloria (they celebrated 50 years of marriage this summer) has serious health problems so he likes to stay close to home in case she needs him. With Gloria’s health weighing heavily on his mind, Alan’s managed only about one ride a week lately. But he hasn’t wavered on his commitment to his goal.

The odometer on his current bike reads 8,166 miles; and he figures he’s put in an additional 1,500 miles onto other bikes.

Alan says Oregon City has been one of the more interesting places he’s ridden. “But the hills have been tough,” he said in an understatement. Our ride last week began with a ride on the Oregon City Municipal Elevator and a cruise along the McLoughlin Promenade high above the Willamette River with views of the historic Arch Bridge and the defunct paper mill. 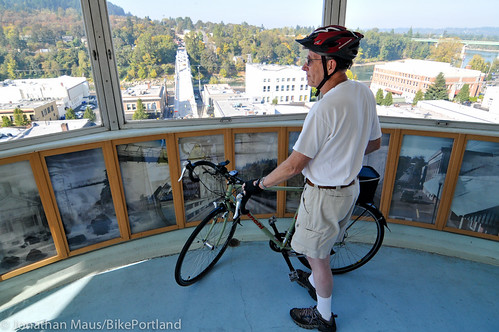 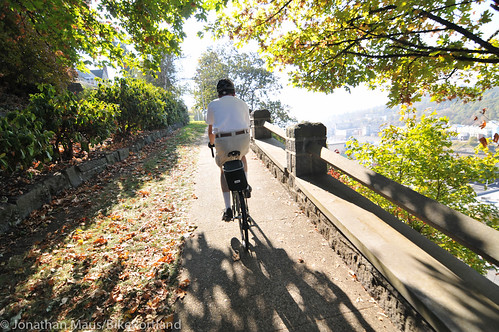 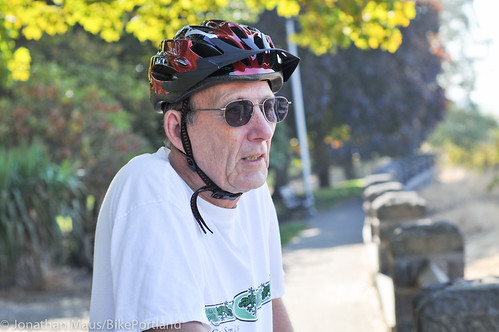 “I wanted to keep moving,” Alan said when I asked why he took on this project. While exercise was certainly a motivator, as I followed his wheel I realized he also loves the adventure, exploration, and discovery.

Pedaling on from the Promenade and through the historic streets of Oregon City, we entered the old (now closed to cars) road through Waterboard Park. I felt like we were in an Indiana Jones movie. Almost completely eroded in some places, the road is more of a mountain bike trail with huge overhanging rock cliffs on one side, and large cracks on the other. “I often wonder,” Alan said somewhat jokingly as we stopped briefly to catch our breaths, “if I’m safer riding on the edge and possibly falling over the cliff, or taking my chances with all the falling rocks.” 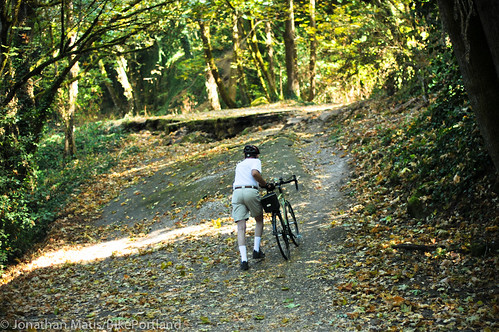 Once out of the forested park we reached a stunning viewpoint (at the end of Promontory Avenue no less). As we soaked up the sights, Alan expressed a rare bit of reflection. Talking more to the view than to me, he said “Looking out at this, it really makes me think of the last 6-7 years. I’ve ridden all these roads.” He said he remembers many of them, especially the ones with a beautiful church or other visual distinction. And of course he remembers the big climbs: “Especially remember the curvy uphills,” he said, “When I had a long time to think.” 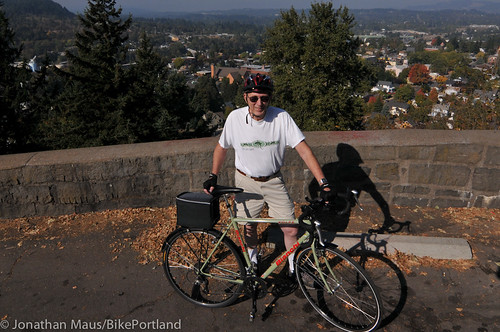 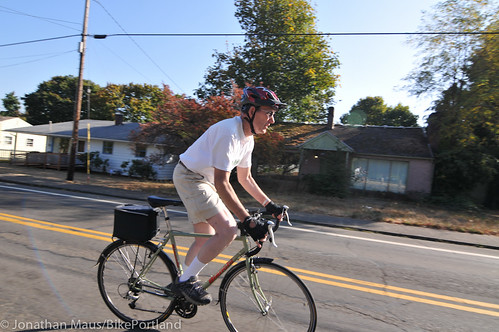 When he hears a road mentioned in the newspaper or in conversation, it often sparks a specific memory of actually being there. It’s like he has an entire atlas imprinted into his mind and his muscle memory.

Even Wednesday, at the end of this huge undertaking, he was still excited to share things he’d remembered from previous rides (he does a lot of repeating the same roads en route to unridden ones). “You’ve got to see this garden up here,” he called back to me. “There’s a beautiful park around the corner.” he said another time. He also enjoys all the old, classic cars parked in driveways. “I keep looking for the ’51 Chevy I had in high school,” he shared, “It was lowered, with pipes… I called it the ‘Cheerleader Catcher’, and it worked too.” 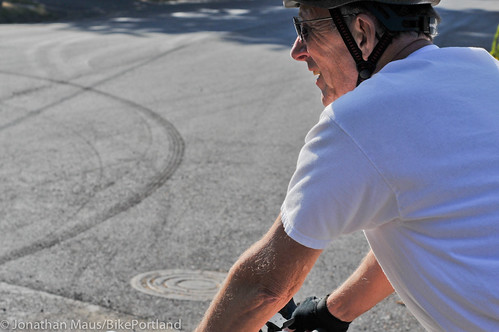 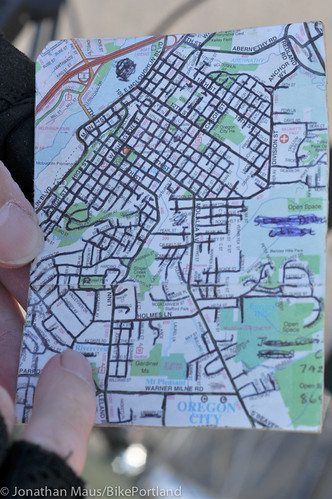 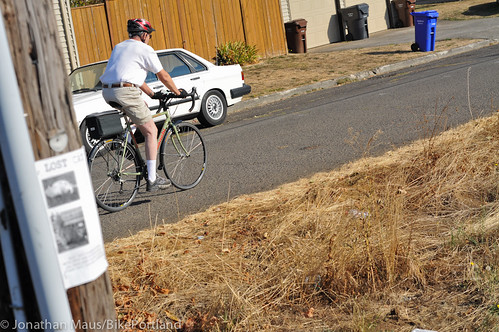 There’s been a social element to his journey as well. Alan told me he started looking up old friends online and then calling them up, out-of-the-blue, when he’d be biking by their house. “I hadn’t seen this guy in 30 years, but I figured I’d stop and say hi since I was biking by.” He also has an email list and he sends out a message keeping friends and family posted after every 1,000 miles ridden.

And then there are all the dogs he’s come across. Rural roads are the worst. But in more urban areas, like the one we heard barking loudly as we knocked Laurel Lane off the list, they are just an amusement. “I like to have fun with them,” said Alan as he swung his bike around in the direction of the dog. Suddenly Alan was barking back, mimicking the dog’s call: “Whooruuff! Whooruuff!” he yelped, sort of surprising even himself I think, then added, “I don’t even know where that came from.”

After all the close calls with dogs and drivers, seven years after he began, Alan’s journey came to end on Warner Street near St. Pauls Cemetery. He rolled through the dead end and we stood under a huge tree on the cemetery grounds. Alan’s face was a mix of relief and happiness. “I started doing this to get out of the house and see new and different things,” he said, “I’ll miss it; but I’m kind of glad it’s over.” 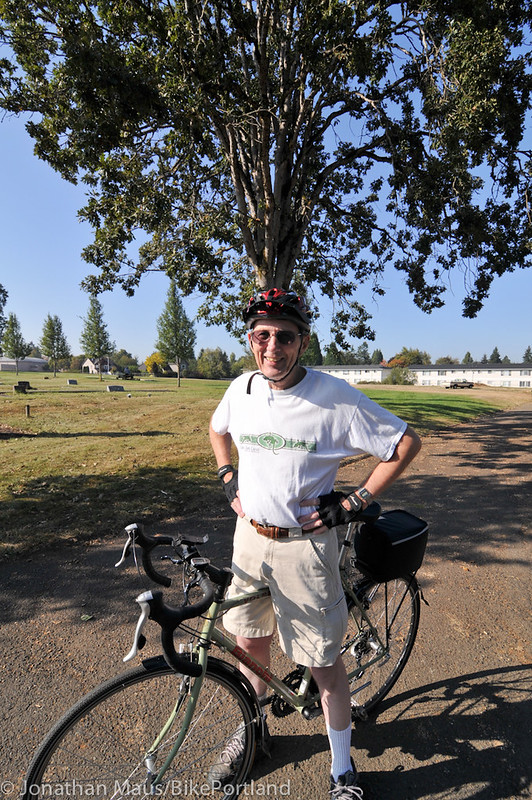 Coincidentally, given this ending location, Alan has already found his next pursuit. He’s volunteering with a grassroots web service called Find a Grave. To stoke his adventurous spirit and his love of photography, Alan will be head out to cemeteries around the region to photograph headstones and help catalog the names and their locations.

It’s a good fit. It’s got adventure, exploration, and discovery. And yes, he plans to bike to some of them. He might be done with his road quest, but he’s not ready to hang up his bike. “I’ve got to keep riding.”

…now onto Vancouver and beyond!!!!

Someone send that man a Vancouver Bike map stat! Before his muscles start to atrophy. 😉

This is so cool. I feel like a moldy old sack of flour after reading this.

Thanks for the inspiration, Alan. You set a fairly big goal and pulled it off. And, thanks Jonathan for finding and reporting this story. I’m inspired!

Congratulations on such a major accomplishment Alan! I look forward to your next adventure and photo series!

Thanks for the inspiration, Alan!

Just was thinking about this fellow recently as we were riding around town picking out random streets to go to Sunday Parkways and commute trips home. Dang, got a long ways to go to catch up to Alan! Thanks for sharing this historic and folkloric moment:-)

Next time you come to Sisters, look me up and we can ride McKenzie Pass together—21 ascents so far in the past two years. (my age—almost 75)