10 years ago next week Portland City Council passed the Bicycle Plan for 2030. Now scrappy local bike advocacy group Bike Loud PDX wants to make sure they don’t forget about it.

“It’s a good plan and we just need to follow it.”
— Emily Guise, Bike Loud PDX

For a plan that took three years to develop (and survived a major snub by then Mayor Tom Potter which he later reversed course on), was intended to create a “world-class” cycling city, and was considered the “holy book” by some bike lovers, the 2030 Bike Plan hasn’t lived up to expectations. Or perhaps expectations of a single city planning document were too high? Whatever your take on the last decade, Bike Loud wants to re-ignite the fire behind the plan — and behind cycling itself.

We have very little time to burn if we want cycling to account for 25% of all trips in ten years as called for in the plan. We’re at a dismal 5.3% of commutes right now.

“Portland should have been delivering 34 miles of new bicycle facilities annually,” reads the draft version of Bike Loud’s 18-page bike plan progress report. “Instead, roughly nine miles has been built per year on average since 2010. The costs to our community from not building out the bicycle infrastructure network on schedule are significant.”

Far from a trivial issue, high rates of cycling — the most affordable, equitable, efficient, and safest form of transportation ever invented — can be a solution to many of Portland’s problems. Bike Loud points to the costs of delay: Far too many people are hurt and killed on our streets because of our overuse of cars; congestion caused by car users is way up throughout the city; greenhouse gas emissions (GHG) from tailpipes are going in the wrong direction; and we aren’t meeting our vehicle miles traveled (VMT) targets.

Bike Loud doesn’t fault the plan for these worrying trends, they fault the lack of its implementation. “It’s a good plan and we just need to follow it,” says Emily Guise, the group’s marketing and communications coordinator. Bike Loud’s report found that half-way into the plan’s shelf-life, only one-eighth of the projects it identified have been built. To meet 2030 promises, Portland needs to build 59 miles of new, world-class bicycle facilities every year for the next 10 years.

When PBOT released a report on the plan last year, Bike Loud Co-Chair Catie Gould said the lack of progress, “Should be an alarm bell.”

Next Tuesday (February 11th), Bike Loud will host a rally at 12:00 noon outside City Hall. There will be speakers, Bike Plan birthday cards to sign and send to elected officials, cupcakes, and kazoos. It will be part rally, part celebration. 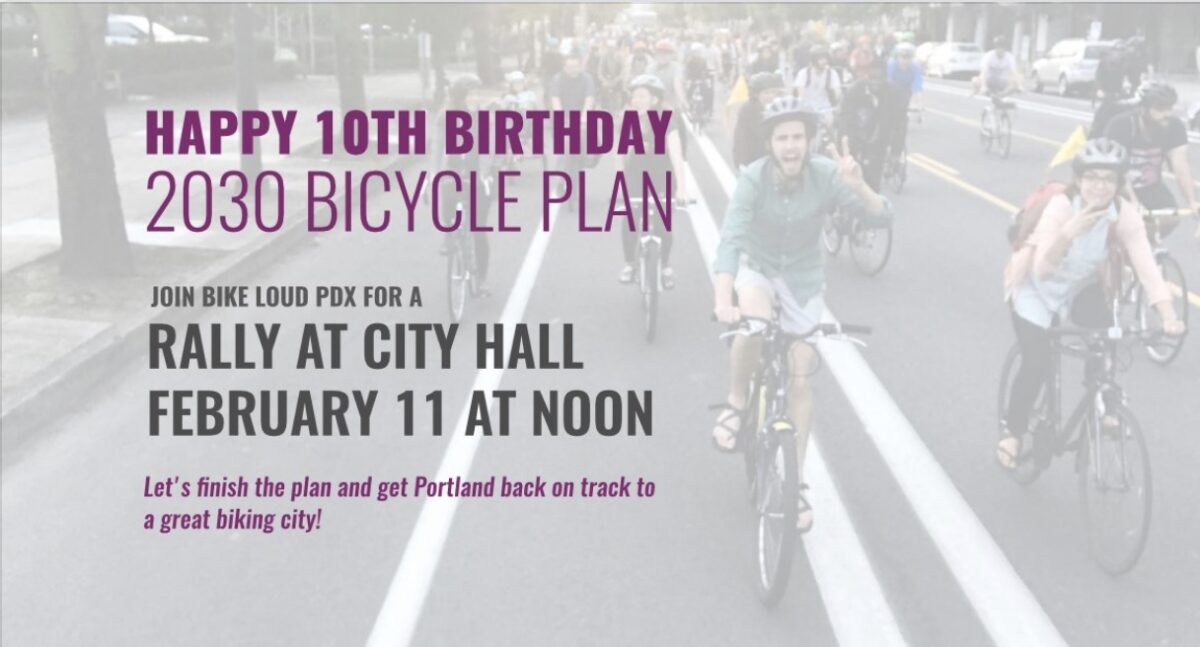 In sounds like it will have a similar vibe to the Bike Plan Rally hosted by The Street Trust (then the Bicycle Transportation Alliance) 10 years ago this morning. Let’s hope it has a larger impact.

I LOVE THIS ORGANIZATION! THANKS BIKE LOUD!!!

one
Reply to  one

Oops. Sent that last one too soon.

jeff
Reply to  one

Whole dollar amounts only it seems.

were the flyers being handed out on N. Williams and Broadway last night announcing this? I didn’t stop to get one.

Yes, that was me! Hope to see you on Tuesday.

Aren’t we like 10 years into the ORCMP planning process? When’s the next rally for that?

Mayor Potter…yes I had forgotten that…but remembered that when he rode with the monthly Bike Critical Mass ride that was the first ride the PPB did not try to beat us / push cyclists out of the bike lane and onto the sidewalks like each other previous ride.

Such a sea change: from Black batons / black helicopters to Red roses in 15 years.
https://bikeportland.org/2012/09/28/its-the-20th-anniversary-of-critical-mass-what-it-meant-then-and-now-in-portland-78129

Had a fun time finding myself in that photo, can’t believe that was 10 years ago.

Like most city plans, it’s not only a product of its time (it’s already a bit dated), but it was “multiple, vague, and conflicting” as PSU planning professor Sy Adler would say. It basically ignored East Portland and Souhwest, hence EPIM and SWIM. It advocated for various shared infrastructure that no city has yet adopted, yet I don’t recall any protected bike lanes in it. Most of all, it had a price tag that was astronomically more than the city could reasonably afford, especially in the middle of the Great Recession. Basically, a platinum plan for a shoestring city.

@David Hamsten, all valid points. I trust PBOT is fully aware of them, and would trust them to adjust facility type to meet new standards adopted since the plan, such as for protected lanes. The point is that the pace of annual project delivery needs to be increased at least fourfold. Once that rate is reached, we should have a community conversation about the x% of the plan that may require further adjustment, beyond CCIM, SWIM, etc. What we don’t want to see is for further study to be used as an excuse to not pick up the pace considerably, immediately. We already had that decade.

How are you suggesting that the city fund that 4-fold increase in its implementation rate = construction costs + increased design and labor costs?

If this was here in NC or any other state in the USA, one would simply take resources from say parks, public housing or police and redirect it to PBOT. But governments in Oregon rarely work that way – they tend to only use transportation-oriented funding like gas tax to fix transportation-related infrastructure, rather than use property tax or a nonexistant sales tax, and limit themselves only to those dedicated transportation funds. So what are you going to cut from the existing PBOT budget to pay for a 4-fold increase in bike infrastructure implementation? From those cuts, what are you planning to do with the personnel who just lost their jobs? And where are you going to find the personnel to implement the improvements when so many other US cities with real big bike budgets are hiring the best?

@David Hamsten, my job title is not PBOT Bureau Director, nor is my application for that position currently up for consideration. A lot of what you ask for are in the realm of decisions to be made by bureau management in order to effectively implement policy direction from Council. If more money is needed, then PBOT should be submitting a funding application to Metro to build out the bikeway network as a part of November’s transport ballot measure.

Whoever handed me a postcard on the Hawthorne last week, I’ve sent it to City Hall!

This cartoon has proven to be unfortunately prophetic:
https://bikeportland.org/2010/02/12/friday-cartoon-dont-let-it-sit-29431

This is really more of a wake than a birthday party…

BIKELOUDER!! You guys are so awesome!