Skip to content
Motherload takes us on a journey through cargo bike history and use.


Motherload is one woman’s story about finding cargo bikes; but her story connects with the story of the birth of the bicycle, with the first women to ride bikes, with early cargo bikes, with more mainstream cargo bikes — and ultimately with the generation of young people whose lives will be made better by bikes. Some, if not all, aspects of director Liz Canning’s movie should connect with every viewer.

Motherload premiered in Portland last week and I wouldn’t have missed it for the world.

The film spoke to me because Canning’s story is my story, as are the stories of the women interviewed in the movie. The isolation and sometimes despair experienced by new mothers is universal. I found solidarity learning that I hadn’t been alone in that abyss, and I shared joy with Canning and the cast to see (spoiler alert but not really) hardship remedied through family biking. Canning resides in Fairfax, California, so of course there’s a lot of Bay Area footage, but scenes are shot all around the world. Motherload was crowdsourced, so in addition to interviews with builders, innovators, and participants in the cargo bike world conducted by Canning, passionate cargo bike owners sent in footage of their own rides and interviews. Portland viewers will be happy to see lots of Portland in the spotlight.

The film was shot and assembled over eight years which I mistakenly figured would make for some clunky gaps. The film flows from Canning’s own story to historical lessons to various bike events. And somehow, it all clicks. It’s apparent that Canning is a professional filmmaker in addition to cargo bike evangelist because the footage is gorgeous — especially the way she captures the hills near her home — and everything is artfully tied together. The long timeframe meant Canning had time for additional research and travel to fill out the entire history of the cargo bike: From bicycle precursors to fabulous family contraptions to suffragettes on two wheels. A look at early cargo bikes has great footage of Ross Evans building longtails in Nicaragua long before he founded pioneering cargo bike brand Xtracycle.

There’s also a mystery! Canning uncovers a cargo bike conundrum and this is perhaps my favorite part of the documentary as none of the trailers, extras, Kickstarter updates, or social media posts hinted at this part of the movie. This was only one of many stories new to me despite having closely followed the project from the beginning.

The bikes themselves are awesome, but they’re not what make the movie. The people steal the spotlight from the bikes. And it’s funny! I don’t know if the bikes are also to thank for that, but bikes evoke joy and the interviewees’ glee is infectious and feeds a certain silliness. The silly sense of accomplishment over fetching groceries by bike with kids in tow is mentioned many times in the interviews and it’s a feeling I know well. The insistence on not being extraordinary is also a common theme. Portland mom Emily Finch carried six (now seven) kids on her bike and made national news after being profiled on BikePortland.org. In addition to the obligatory grocery store rally call in an interview with Canning, a clip of Finch with her Workcycles bakfiets in a news studio has her assure the reporter she’s nothing special and other moms back home have the same bike. This is technically true as there are other bakfietsen on the streets of Portland, but none with as much cargo as Finch’s. 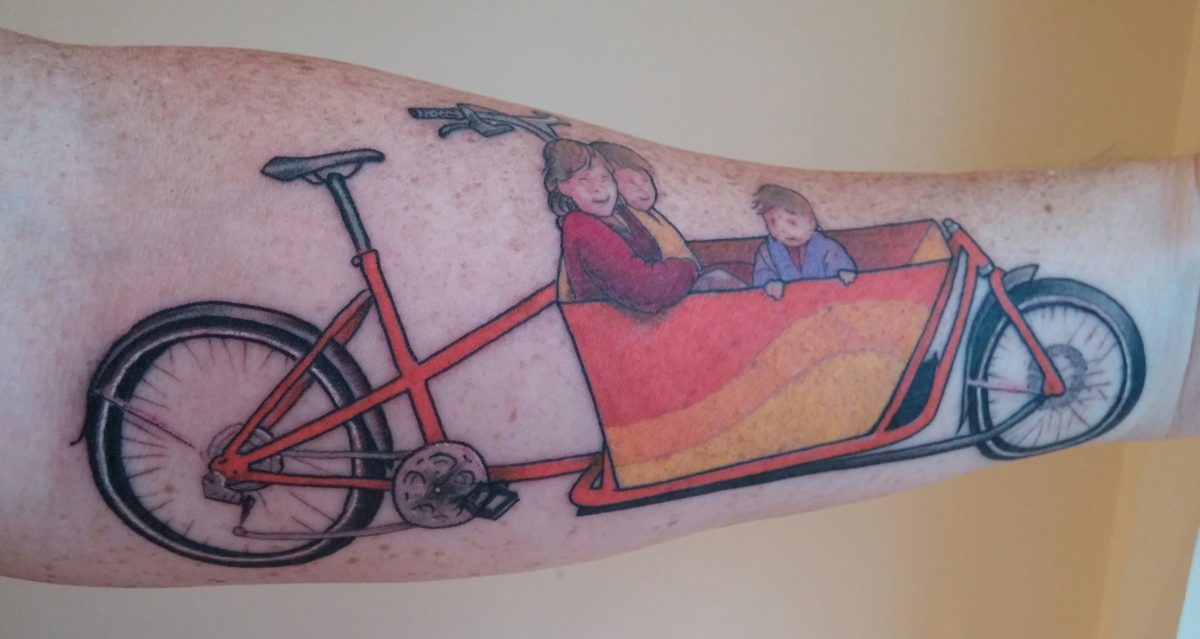 The message that anyone can do this is an important one for the cargo bike movement. One scene I loved was when Brent Patterson from New York rode his longtail Yuba Mundo to Buffalo State College through a snow storm and told his students, “I’m a normal guy, just like you.” He is, but he’s also superman. As is his wife, Stacy Bisker, who carries their four children (three in back, one in front) on their Yuba Mundo in all weather. In addition to celebrating biking to groceries and selling the family car, Bisker was a champion crowdsourcer and collected footage of numerous biking families.

The footage of cargo bike events is also spectacular and inspiring. Canning organized a Cargo Bike Jubilee as part of Fairfax’s large Biketoberfest event. There’s also lots of coverage of Portland’s second annual Disaster Relief Trials in which cargo bikes save the day after a mock natural disaster. And much cuter and no less heroic is the footage of Fiets of Parenthood in which the disaster is retrieving a dropped toy while racing through an obstacle course.

This film will tug at your heartstrings and make you want to ride your bike — maybe just to get groceries, maybe to carry a kayak or two.

Motherload is 86 minutes long, but it’s a long 86 minutes; I felt as if I’d sat through a feature over two hours long. There’s so much packed into the movie, but it doesn’t feel overly crammed with information thanks to the varied pacing. The fun soundtrack helps with this deception, with the peppiest of catchy tunes following the veritable train that is Emily Finch and kids, and Ross Evans and colleagues carrying ridiculous loads on the first Xtracycles, balanced by hypnotic melodies as Canning narrates her moods and thoughts through the changing seasons of her local grassy hills and beaches. You don’t have to own — or even want to someday own — a cargo bike to enjoy the film, and you don’t have to be a mother to feel inspired.

But if you happen to be a mother who has a cargo bike, you’re going to love Motherload*.

(*From the Screening FAQ if Motherload is appropriate for children: “There are two brief images involving blood and suggesting violence (one still photo from a newspaper article, and a few shots from The Walking Dead with zombies). Also, there is one scene involving crude language that sensitive kids (and/or their parents) may find unsettling. We may eventually create a censored version in which this adult language is bleeped out, but for now there is only one version of the film available.”)

So I’ve been thinking about this film and the topic of bikes and kids and parenting and gender roles a lot since watching the trailer and reading this article (didn’t have a chance to watch the full film–yet!). While I totally get and appreciate the women’s empowerment angle, I also wonder to what degree cargo biking and hauling kids around has become yet another good, green thing to do that has places a disproportionate burden on women. I’m also thinking of a recent article I read about how the zero waste movement seems to fall largely on women, to remember the tote bags and the reusable straws and bento boxes. Yes, let’s celebrate how empowering it feels to get groceries and run errands and drop your kids at school with a cargo bike, and the connectedness and power that come from moving your body outside rather than the isolation and frustration that can come from driving in a car toting said children around and wrestling with parking and car seats. But can we also acknowledge the extra work of cargo biking, that seems to land on the shoulders and pedals of women?? The all-weather outfits for kids, the extra bags and snacks, the careful route planning to accomplish all needed errands, the concern for the environment to prioritize a non-fuel dependent mode of travel, and just the sheer, physical exertion of pedaling the damn bike with all that damn cargo. Sure, driving a car is soul-crushing and all that, but it really can be a lot easier! (Insert your arguments here about why biking is better and all that, and know that I pick that mode many days as well, but there really is something easy about stepping into a climate-controlled, dry vehicle that responds to the merest touch of your toes and can travel on all streets with infrastructure specifically designed for its needs.)

I’m curious if the gender dynamic is different in other families. Sometimes I see the dads riding the cargo bikes and hauling the kids; there’s potential for the stereotype about men being stronger leading to men carrying the heavier load, but that doesn’t seem to be the prevailing story from my own, limited observations.

(And I write from a cis, hetero perspective because it is what I know, and I mean the terms “men” and “women” here as broadly as possible, but would love to hear feedback about different gender dynamics for other families as well.)

I can’t wait to see this film! I’m a kickstarter backer and have been patiently waiting, hoping it would be awesome.