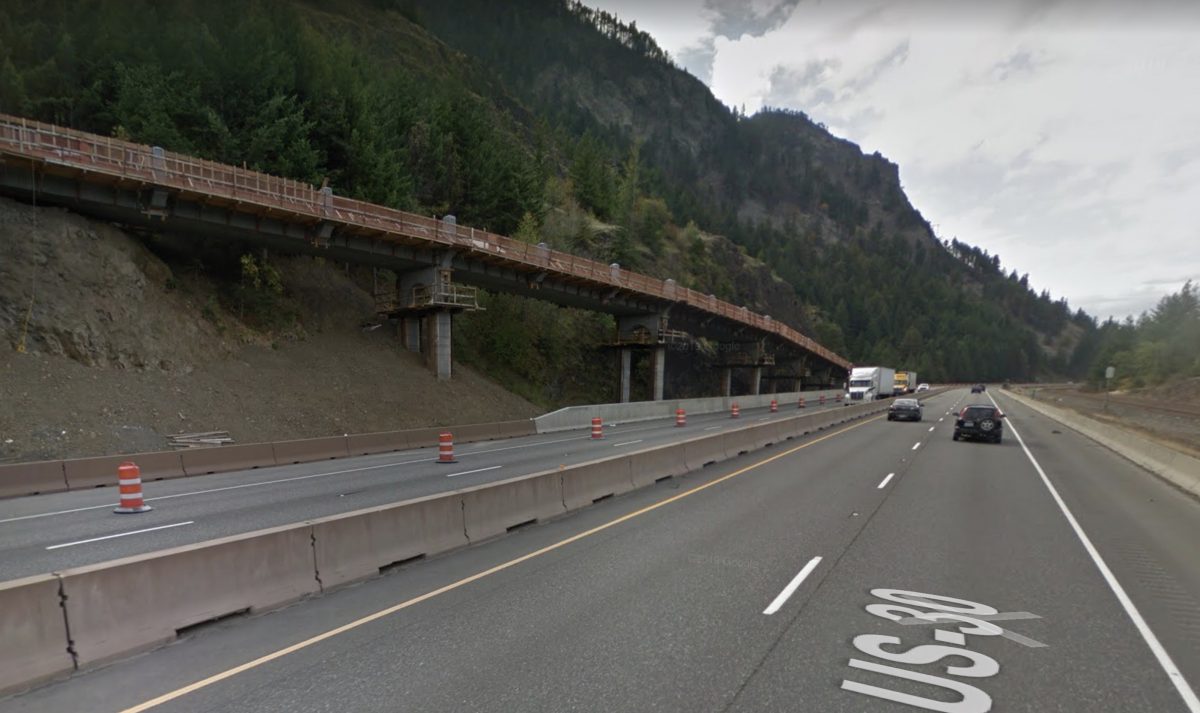 The impressive new path can be seen on the left rising above I-84 east of Wyeth in this Google image from October 2018.

We are less than three weeks away from the opening of a new segment of the Historic Columbia River Highway State Trail: A 3.3 mile carfree path that offers stunning views of the Gorge. In fact, path users will have the opportunity to take in vistas that have been nearly impossible to see outside an automobile for over a century.


“This section is a vital piece in the Historic Highway State Trail.”
— Terra Lingley, ODOT

The Oregon Department of Transportation plans to host a ribbon-cutting event and host a group bike ride on the $19 million project August 3rd. The path took over two years to complete and it goes from Wyeth (at the Gorton Creek Trailhead near milepost 51) to Lindsey Creek. “It is a major undertaking including a trail around Shellrock Mountain on top of the existing bin wall, a 500’ Summit Creek Viaduct (bridge over land), and the Lindsey Creek Bench Cut,” reads ODOT’s website.

“This section is a vital piece in the Historic Highway State Trail – it provides a separated route around Shellrock Mountain, where I-84’s shoulder is the narrowest, and connects with previously-built segments further east for a roughly 6-mile continuous route,” ODOT’s Columbia River Gorge National Scenic Area Coordinator Terra Lingley told us via email today. “This trail will allow cyclists and hikers to slow down, take in the sights (both Wind and Dog Mountains are visible from a number of ‘rest and pause’ areas), and reconnect with a part of the Gorge that is hard to see outside of a vehicle.” 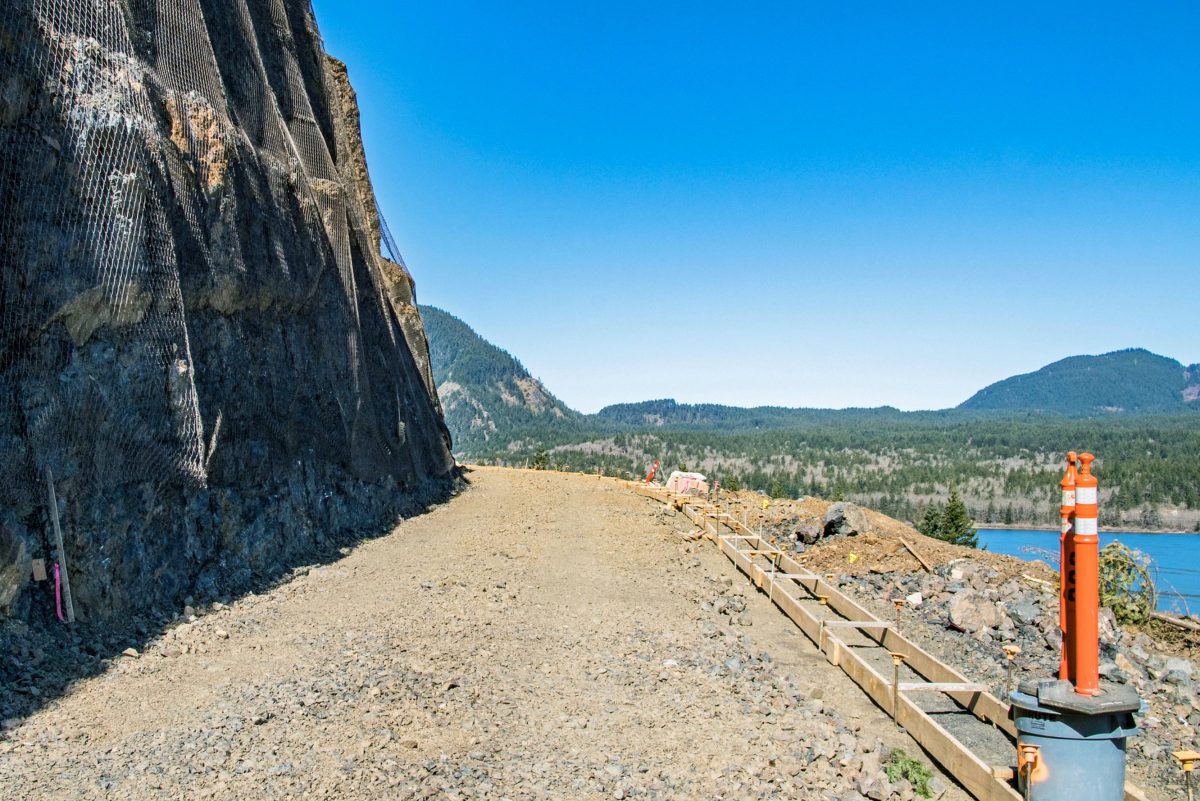 This new section is west of a 1.2 mile section completed in September 2016 and it puts us just five miles away from completion of the 73-mile route that will eventually give bicycle riders the ability to go between Troutdale and Hood River without using Highway 84.

Unlike other recently completed parts of the State Trail, this new section will be easily visible by drivers on I-84. It runs adjacent to the highway just east of Wyeth and is sure to be looked at with envy by everyone behind the wheel of an automobile. Here’s what ODOT says about the path:

“These structures will honor our past and their design will integrate into the Gorge landscape and history. Skilled rock masons will reflect the original craftsmanship by using their skills passed down through generations to construct elegant new rock walls.” 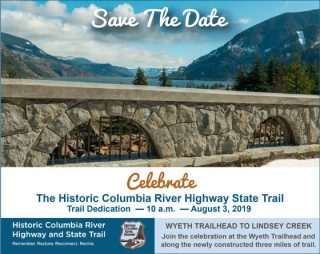 Be a part of history!

You can be one of the first to ride and see the new path at the dedication ceremony on August 3rd at the Gorton Creek Trailhead. The event will begin at 10:00 am and the path will be open for walking and rolling from 11:00 am to 6:00 pm. There will also be a group bicycle ride that will leave from the Bridge of the Gods in Cascade Locks at 9:00 am. See the ODOT project page for details.

The next big piece of the puzzle — the Mitchell Point segment — is already funded and queued up for construction in spring 2020. That will be the final five miles.

Can we expect ODOT haters to pour fake blood on the path and “die in” to block the ribbon cutting? Sadly, I expect so

C’mon, Granpa, it’s not an either-or thing. Kudos to ODOT for doing a good thing here – or at least we hope it will be good thing (need to try it out first). ODOT clearly does other things really badly, as we’ve all seen. It’s possible for the same agency to do things well and also badly. “The test of a first-rate intelligence is the ability to hold two opposed ideas in mind at the same time and still retain the ability to function.” F. Scott Fitzgerald

Yes, although I don’t even think that “most of what ODOT builds is bad” and “this is good” are even opposed ideas!

A propos of nothing in particular, that would be fun to just start staging die-ins all over the place, kind of as an art project. Ice cream shop die-in! Benson Bubbler die-in! Maybe a die-in die-in! (Yes you are correct, that would be a die-in to protest another die-in happening nearby.)

Yeah sorry, I’m not sure what the heck. Maybe it has something in common with the “Lady Liberty crying” that you see in every single Onion cartoon – and this week is no exception: https://www.theonion.com/neighborhood-grosser-1836211959

Super-excited to ride this. My dream is to be able to bike all the way to the Dalles one day.

Adam, it’s a fun ride. My daughter lived in The Dalles for a bit and I rode there 4-5 times. Take out the I-84 bits and it’s pretty quiet most of the time. You’ll love riding there.

Love the new path, but you have to admit that viaduct/bridge is sure an eyesore. Hard to believe Gorge Commission insists homeowners use specific home paint colors but allowed this to go through.

More of an eyesore than the freeway?

Hallelujah! The hairballiest section of the riding the Gorge is finally no more. Can’t wait to ride this.

Wow. Another section down. And one to add to my bucket list to ride.

Though I am now a bit worried…if drivers can see it from the roadway, then they might try to drive it during congested periods…just lost this drivers that end up on the I-205 (and other) paths!

Awesome job! I look forward to when this is fully complete! I can enjoy more weekend rides to Hood River!

I love to support these initiatives as it allows biking to evolve into a regional effort. Imagine one day going from Tilamook (via Salmonberry Trail) to Hood River all on seperated bike trails! Hopefully I’ll still be alive to see that!

My (small request) for the Gorge trail: can we get rid of the stairs at certain points? The cutout for bike don’t work so well if you have a touring bike. Other than that…I can’t wait to check out the new section.

Ranger at Vista House said replacing the stairs with a ramp is part of the overall plan. Not sure about timing.

Does anyone happen to know if the group ride from Cascades Lock is “family friendly”? The website notes an elevation gain but nothing else.

The bike ride from the Bridge of the Gods to the start of this new section is 7.5 miles. It is mostly on Wyeth Road, which normally has low car traffic. Wyeth Road does have a hill that is quite steep – as high as a 15% grade. Here’s a GPS plot of the route:

I remember Wyeth road…that hill was no joke (but I was probably tired on weighed down as well). I often warn people who do travel to Hood River by bike about the hill at Wyeth. At least, like you said, it has very infrequent traffic.

How rideable is the I-84 Hwy shoulder from Lindsey Creek State Park to Hood River?

Jim, it’s really wide, at least eastbound. In my memory of riding it (4 times), I’d guess it’s like 8’+ for the most part. Never ridden westbound.

I should add: there’s a path from Starvation Creek to Viento, so I haven’t ridden that part of the freeway.

Does this mean you can ride from Wyeth State Park to Starvation Creek without going on 84?

That would be correct, and on to Viento state park from there.

I cannot tell from the project page…is this new section replacing the section that requires one to carry your loaded touring bike down/ up the long stairway OR adds a new section to the east (avoiding the lack of shoulder that required shooting a gap in traffic and scooting across a bridge section)?

This is a new section in the east. The dreaded stairs are still in place west of Cascade Locks.

Can anyone suggest the best way to get from central Portland to the start of the Columbia River Hwy? I’d like to do some Gorge rides, but not crazy about riding through Gresham or Marine Dr. Although it’s been years since I rode out there via Marine Dr, so maybe it’s better now? It looks like the Max will dump you right in the middle of Gresham with some nasty looking 4 lane roads to travel, but again maybe it looks worse on street view than it is?

You can take the Springwater Corridor to Gresham. From there you can get to the Gresham Central Max Station (I’m not certain on the particulars, but it’s not a huge distance you need to figure out).

From the Max Station, the city published a cycling cue sheet and elevation profile (which is fairly up-to-date…up until this new section opens up!)

Here is the cue sheet.
https://www.portlandoregon.gov/shared/cfm/image.cfm?id=322056

You can take the Springwater Corridor to Gresham. From there you can get to the Gresham Central Max Station.

From the Max Station, the city published a cycling cue sheet and elevation profile (which is fairly up-to-date…up until this new section opens up!)

Here is the cue sheet.
https://www.portlandoregon.gov/shared/cfm/image.cfm?id=322056

According to the ODOT website, construction will continue throughout the summer, and the route will only be open between 11am and 6pm august 3 for the ribbon cutting. In other words be off the trail at 6pm 8/3. There is no date set for a permanent opening as far as I can tell. Probably a good idea to fix this posting to avoid confusion, unless I am wrong about this.