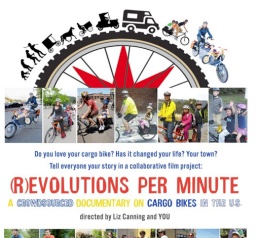 Ever wanted to be involved with the creation of a bike film? Now’s your chance. Filmmakers Liz Canning and Travis Wittwer are both working on bike film projects and they’re both looking for your help.

Ms. Canning is making (R)evolutions Per Minute, a documentary about the explosion of cargo biking in America. What makes this project doubly cool is that it’s being crowdsourced and Canning is calling for submissions. If your clip makes it into the final cut you’ll get a “co-director” credit. But don’t send the usual “I love cargo bikes!” stuff. Canning wants compelling footage that will reach out to the unconvinced.

“Think hard about what makes your [cargo biking] story unique and the best story to illustrate that on video,” reads Canning’s website.

Get all the info you need at LizCanning.com and check out the action on the (R)evolutions Per Minute Facebook page.

Portlander Travis Wittwer is working on a film project for the big 10th anniversary Filmed by Bike event. His premise is fantastic:

“a movie that shows how hardcore Vancouver (WA) cyclists are… Vancouver is often the ugly cousin to Portland, especially in areas involving transportation, especially bikes. While Portland has great bike lanes and infrastructure, Vancouver lacks. This is not a critique of Vancouver. Rather, a statement of how much harder it is in Vancouver so (therefore) more hardcore.”

Wittwer is the creative force responsible for such FBB faves as Wild Creatures of North America and Rack Attack!. If you’d like to help him make this fun parody that compares hardcore Vancouver riders with their Portland counterparts, get more details on his blog.

I’m starting filming for the “bike train movie” this weekend. Hoping to make it into film by bike. This is my inspiration: http://www.youtube.com/watch?feature=player_embedded&v=m7Um3TNiZYk

I bike commute 3 days a week to Vancouver. The infrastructure change is harsh! At my Vancouver intersections, the inductive loop triggers are totally bike-insensitive. I perpetually use the “button hook” to go straight through: right turn, u-turn, right turn. Not to mention the Plains, the “my road” drivers. “Hard-core” is a pre-req for sure.

Antload —
You can report the defective loop triggers to the City of Vancouver’s Public Works department. They’ll fix them.

There’s a form to fill out here — tick the “traffic maintenance” bubble.
http://www.cityofvancouver.us/servicerequest.asp?menuid=10465&submenuID=17081

Or try one of the email addresses on this page.
http://www.cityofvancouver.us/contacts.asp?menuid=10460&submenuid=10491

Most cities don’t go out and test the signal detectors on a regular basis, they rely on users to report defects. You can help them out by calling in the ones that don’t work.

From the “Service Requests” web page:

“The City of Vancouver is dedicated to providing quality customer service… In the form, give as much information as possible. A city employee should contact you within one working day.”