It’s been many years since we’ve had a transportation commissioner as willing to voice progressive ideas and positions as Chloe Eudaly.

I’m not sure if it’s because Commissioner Eudaly is simply more comfortable on social media than any other council member, or because she sees the communication channel as a strategic tool to shift the conversation her way. Whatever the reason(s), I like it. And if you care about smashing the transportation status quo, you should too.

Two recent Facebook comments from the Commissioner stand out. One was lighthearted, the other more meaty.

Last week she jokingly posted a “Hard Pass!” graphic in response to our story about the upcoming World Naked Bike Ride. Then, in response to a constituent who felt the new bus/bike lane on SW Madison unfairly “forced him out” of his car (as if!), the Commissioner wrote in all caps “YOU ARE THE CONGESTION!”  The exchange was worth a screenshot: 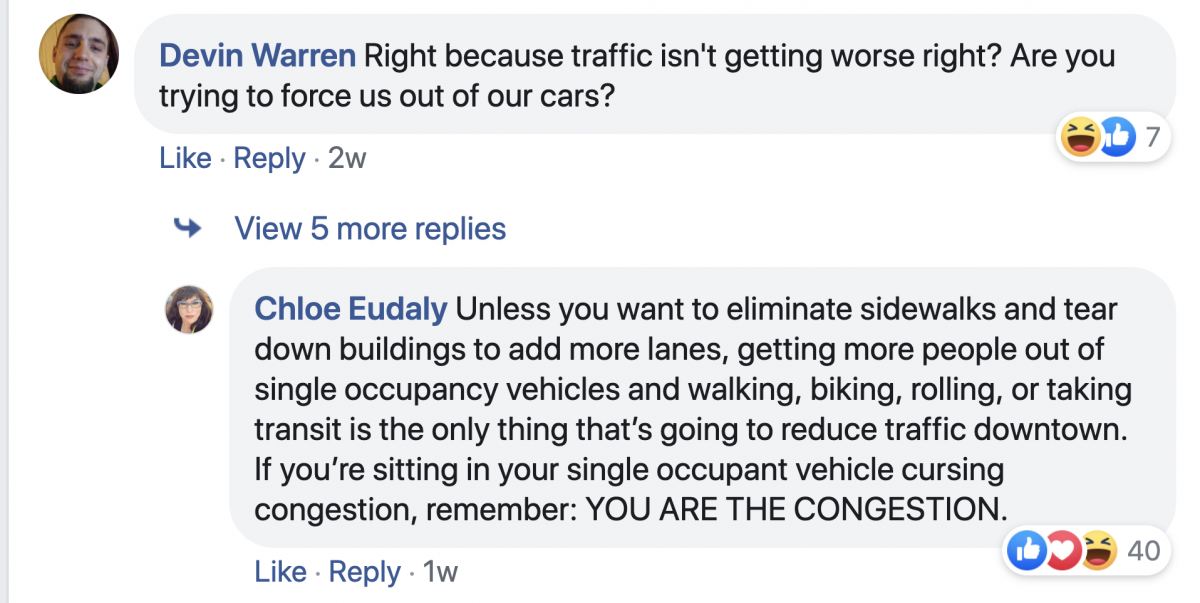 It’s one thing for a leader to have these opinions, it’s another thing to express them candidly in a public forum like Facebook. And they have added resonance because people tend to tune out politicians who can only speak in glittering generalities and who fear direct communication via social media.

While PBOT remains too timid, they agency has shown promising signs of progress recently. Now with Chris Warner being firmly seated as director — and with Eudaly gaining more confidence on transportation issues with each passing week — I’m optimistic about what lies ahead.

If PBOT is ever going to start riding faster, they need someone like Commissioner Eudaly out front to provide a draft. We are nowhere near the finish, but at least we have someone on city council not afraid to engage and speak truth to naysayers.

I love it when people say it like it is. Don’t mush mouth.

As for ‘taking our cars away,’ ‘forc[ing] us out of our cars,’ that is such a histrionic trope. How do those who deploy those phrases imagine this would work, anyway? A car-zapping authority? Like we imagine might have existed in Stalin’s Russia or in the Republic of North Korea? It is just so deliciously out of phase with what goes on here, is proposed, is conceivable.

Middle of the Road Guy
Reply to  9watts

it’s been my observation over the years that the basic structure of a conservative political message is “They are going to take something from you, and we need to fight back to take what is ours from them.” It’s straight up identity/victim messaging.

9watts
Reply to  Middle of the Road Guy

“They are going to take something from you, and we need to fight back to take what is ours from them.” It’s straight up identity/victim messaging.

I’m not familiar with the phrase identity/victim messaging, but what you say is plausible, as far as it goes. What is (to me) far less plausible is the substance of the charge.

Putting in a diverter, or a bike lane, or a green box is so far removed from *taking away my car* it is laughable. What could of course happen is that gas prices go through the roof (and not because generally weak-spined politicians precipitated this, but because, well, geophysics), but short of that, or the belated collective insight that we are cooking ourselves to death burning all that oil and gas, the notion that someone with a PERS account will zap our cars is just ridiculous.

The great thing about identity politics is that you don’t need substance — by othering you can convince people that “they” are making hysterical claims like installing a green bike box is is equivalent to confiscation of autos. It’s just another tool for sowing conflict.

This reminds me, in a roundabout sort of way, of the Oregonian Editorial Board stomping its feet, declaring the death of the automobile inconceivable. I remarked at the time that the only reason a group like the OEB would find the need to assert such a thing is if it were in fact threatened, if its hegemony were no longer assured.

And I guess I should clarify that although the practical consequences of the end of automobility are similar to the forcible removal from his car which the Twitterrer Devin Warren was decrying above, the meaning and politics of these two scenarios couldn’t be further apart.

The death of the automobile is inconceivable, wrote the Oregonian Editorial board in their…um…what’s the word for that paper thing that people used to get delivered to their houses, that would sometimes hit the milk box?

As a state employee, let me assure you that the vast majority of PERS account holders are as mired in automobility as anyone else.

Of course. Probably more so, as automobile use tracks income pretty closely.

Ironic, isn’t it, that some people think taming auto use is a tool of privilege?

It can be depending on where you live and what you do for work. My car would sell for less than a nice commuter bike. Automobility doesn’t necessarily track income.

Just think, “The liberals want to take our guns away”. That will give you a pretty good idea. What you often point to as the hard limits of living on a planet with a fixed radius are often spun into something “they” want to take away from “us”.

You’re right. I guess I never will fully grasp the sentiment that personalizes this, that turns a perfectly plausible dilemma: c.f. Pogo into what you’re pointing to: some other group taking something from us.

What was it about “the beam in your own eye”?

I have to admit, she’s learning fast or has a pretty good transportation policy advisor coaching her.

“YOU ARE THE CONGESTION”…Wow she is so edgy.

It’s incredible that people don’t realize that the roads have all manner of capacity 365 days a dear. Between the hours of 10pm and 4am. So yeah, people want to make roads bigger so that half the day they can carry like 10 percent more cars.

Middle of the Road Guy
Reply to  mark smith

That’s exactly it. There is plenty of capacity just not in the temporal window we want it in.

B. Carfree
Reply to  mark smith

Shh now. I go out for joy rides in those dark hours precisely because there are so few motorists.

Quit breeding! That’s the problem. She can fund the homeless issue out of her own pocket too. She could not ride if her life depended on it, so why push it. Every commute can’t be downhill both ways. Making driving inconvenient while EVERYTHING ELSE is based on convenience is pretty damn funny. I may not drive to work, but it’s the ONLY way to escape this pile of garbage when the work week is through. How is the 205 bike path doing Eudaly? Do you get adequate kickbacks from those stupid scooters? Nice waterfront enforcement…

I am going to assume for a moment that you are average or above average intelligence. Let’s do a little comparison. Is Portland more or less dense per mile than say…NYC? How about Japan? So, if they are, and they have about the same traffic…than it’s not a population issue.

So what is the issue…oh it’s too many single car trips. You probably believe that every single person that roams in their car during rush hour is going to and from work. Guess what, they aren’t. Enough of those trips are pointless or could be done another time or not at all. That’s the issue. People don’t think that because there is a free road just out their front door. Then they whine because they themselves create the traffic they hate.

I agree with you up to your call for congestion pricing. Why not just let the congestion happen, making sure there are non-car ways to avoid it (bus lanes, safe routes for biking and walking, etc.)?

In a way, setting up a system where people pay to drive at rush hours removes the incentive to drive less. “Don’t tell me to take a bus or bike. I paid my congestion pricing fee.”

I wonder how many people make pointless car trips at 6:30 in the morning? I doubt many people are making a quick run out and then back to their house before driving to work, before 7:00am…

JM–Please note this comment contains what appears to be a personal attack of Chloe Eudaly’s percevied physical ability.

(Nevermind a bunch of other inane drivel. Yep, a BAT lane on Madison is going to keep you from getting out of town on the weekend. Sure.)

Chris I
Reply to  Gary Becker

mran is one of our best word-salad contributors, but even this one is bad for him.

q
I agree with you up to your call for congestion pricing. Why not just let the congestion happen, making sure there are non-car ways to avoid it (bus lanes, safe routes for biking and walking, etc.)?In a way, setting up a system where people pay to drive at rush hours removes the incentive to drive less. “Don’t tell me to take a bus or bike. I paid my congestion pricing fee.”Recommended 0

Because pricing a good that is in demand and diverting that money to modes that are more efficient works and has worked. Just creating gridlock for the sake of gridlock is a government failure.

If Chloe isn’t a regular rider she cant rightfully call others congestion.