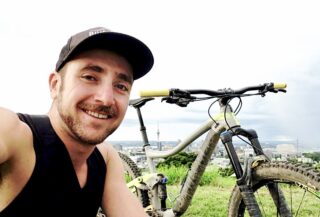 Portland’s close-knit community of bicycle lovers is mourning the loss of Kevin Neidorf.

According to the River City Bicycles website, Neidorf’s kayak rolled over in a Class II rapid on Hood River on Saturday and attempts to revive him were not successful. He died at Legacy Emanuel Hospital in Portland.

All of us at River City Bicycles are reeling from the unexpected loss of our close friend and esteemed coworker Kevin Neidorf… As we endure this hardship together as a community and as the tightly-knit family that is RCB, we strive to focus on the energy, the passion, the bravery, and the love with which Kevin lived his life.

We all know Kevin as an artist; he worked out of our Belmont shop as River City’s creative director, putting out many imaginative and often hilarious advertisements, video projects, photo features, and much of the other media content our brand has produced over the past few years.

We know Kevin as an athlete. He was an impressive rock climber and skilled mountain biker who was always the first to hit the big jumps, one of the fastest riders both uphill and down, a rider committed to pushing the edge of how hard he could ride. He pushed us all to do one more lap, one more rep, one more challenge, because he knew we all have more in us than we sometimes think.

We know Kevin as an adventurer. From his initial cross-country move out to Portland from the East Coast, to solo bike trips across New Zealand and Europe, Kevin always wanted to see what was around the bend and what kind of trouble he could get into once he got there.

Ultimately, we cherish the times we spent with Kevin, and we can take solace in the fact that Kevin built the life he wanted to live, and lived it to the fullest. We miss him immensely, and his loss is a wound that will take a long time to heal. Thank you to everyone who makes this community of ours the amazing social space that it is, and thank you for understanding the challenges we face as we move forward.

Thanks for all the good times, Kevin. We love you.

Kevin was a talented filmmaker. In 2017 we featured his series of short films based on the Rubber to the Road ride guide. And in 2016, we shared his film about the Hazelnut Grove homeless camp. Kevin also captured the beauty of River City’s Cyclocross Crusade series in many recaps over the years (including the one above from 2016).

One of Kevin’s collaborators, fellow filmmaker Drew Coleman, posted about him on Instagram yesterday: “He was one of the raddest dudes I knew – extremely gifted film maker and mountain biker and climber and kayaker and … you get the picture. Unbelievable athlete, an artist and a wanderer of the earth.”

Kevin was a force. It seems impossible that he’s gone. He had so many adventures left to do. Rest in Power Kevin.

For sake of his loved ones, please refrain from needles public speculation on the cause of the accident.

It’s hard to lose a friend, especially when it comes so young. Condolences.

***comment deleted by moderator — This is not the time or place to have this debate. Thank you for understanding. – Jonathan. ***

Can we make contributions somewhere? RIP

This is from Kevin’s online obituary:

Had the privilege of hiring Kevin into his first job in the bike industry. Kevin was an amazing talent and an even better friend. We’ll miss you pal.

Whenever I ran into Kevin I was psyched to see him and strike up a conversation and find out what he was up to. He was truly one of the nicest most welcoming people you would ever meet. He was amazingly creative and talented. This feels like a tremendous loss as someone who knew him casually, I can only imagine how difficult this is for his close friends and family. Wishing them the best as they come to terms with losing Kevin, and remembering what an incredible person he was.

Sorry to hear this news. Jonathan is travelling today so moderating is difficult. He and many of us would appreciate if people would consider the sensitive nature of this post when commenting. Thanks all for your understanding on this.

Had the opportunity to go on several rides with Kevin over the years. He was a good dude. Never afraid to take a road bike off-road! Sad to hear to hear this.

Sad news that a bright star goes dark. I doubt that I am the only reader of this blog who doubted he would “live this long”. I didn’t know Kevin, but I would have liked him and resented him for his adventurous heart while mine grow tame. RIP bold soul

Very sad news. Kevin’s Hazelnut Grove documentary tells as much about him as it does about the residents he interviewed. He was an empathetic person who would use his time and considerable artistic talents to shine a light on the humanity of people too often denied compassion from their neighbors.

I want to echo what Jasper said above: speculating about the death is just as complicated in kayaking as it is in bicycling. That note from River City Bikes does not read as if it was written by someone with extensive paddling experience (I used to work in that industry). Whitewater paddling is not more dangerous than bicycling (in fact, a dear friend of mine who paddles some of the most challenging navigable rivers thinks it’s crazy I get on a bike).

Condolences to his family and friends.