On its 20th anniversary, one of Portland’s best ride guides has taken another evolutionary step. The Rubber to the Road guidebook is now available as a series of short films on YouTube.


Rubber to the Road was first published in 1997. It’s a passion project for River City Bicycles owner Dave Guettler, who moved to Portland three years earlier and wanted an up-to-date resource for all the great roads he was discovering.

“Over the next couple of years I did a lot of exploring the east counties,” he wrote about the project, “and found a number of incredible rides that weren’t publicized anywhere. At the same time I went on some great west side rides with friends, but couldn’t remember the critical turns.”

Working with writers Peter Marsh and Otis Rubottom, and graphic artist Shannon Holt, Guettler had published two volumes of the book by 2003. 44 of the best rides in the area were documented, mapped, and ready to go. But you had to live in Portland and find a copy at the bike shop or a select few other retail locations to have access to them. Then in 2010 Guettler worked with Jacob Erker (who has ridden every one of the routes) to create a web version at RubbertotheRoad.com.

Now 20 years after first sharing them with the world, Guettler has linked with filmmaker Kevin Neidorf to bring these fantastic rides to life via YouTube. So far 10 of the rides have been made into easily digestible short films ranging from one and-a-half to two and-a-half minutes long. The films include a brand new route and introduction to the bike park at Gateway Green as well as routes to Leif Erikson Drive in Forest Park, Stub Stewart State Park, the Fairmount Loop in Southwest Hills, Powell Butte, Banks-Vernonia, and more. 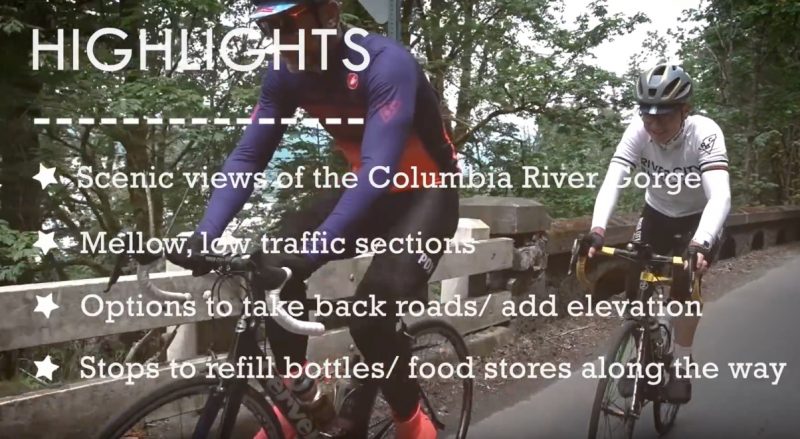 The films include helpful tips and graphics.

The short edits of each route cover the basics of River City’s favorite rides in the region. You’ll get a sense of the beautiful landscapes and some helpful graphics to lead you on your way and/or decide if the route is right for you. The films also include expert tips on what type of bike and equipment is best for the route. You’ll also enjoy narration from River City employees and event Guettler himself (he’s an avid rider).

Check out all 10 videos on YouTube and the full slate of routes (as well as GPS data) at RubbertotheRoad.com.

Which one will you do this weekend?

Nice vids. Great route overviews along with descriptions of what type of rider and bike would be reasonable to take. I hope they continue to expand the series.

You’ll notice a number of routes described as beginner friendly go along roads with no shoulders. That’s not a mistake. They are good routes where the traffic is easy to deal with. Helping riders identify areas they can work with or use to gradually build confidence and skills is a service.

This is fantastic. Love it, some of my best rides have been from these books. …. james buckyrides.com