The City of Beaverton wants a dockless bike share system 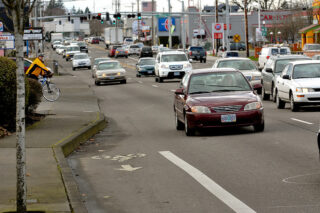 The City of Beaverton (population 100,000) has launched an official request for information (RFI) to learn more from companies that, “can provide useful and relevant information on a dockless bike share program.” Bike-share is called out in Beaverton’s 2017 Active Transportation Plan and city planners say it’s a needed weapon in their fight against congestion which is only expected to get worse as the city grows.

“Metro anticipates that the Beaverton Regional Center will increase by 4,500 new jobs and 10,000 new residents over the next 25 years. As the City continues to grow, congestion on local roadways will continue to increase. As one way to help reduce or at least moderate congestion, the City is looking to increase multi-modal opportunities for residents to get to work, to transit, and in the case of walking and biking, as a general form of mobility and recreation.”

From the RFI language it looks like Beaverton wants to do a one-year pilot program and “if all goes well” they’ll make it permanent.

Some Beaverton residents are already familiar with bike share because Nike’s World Headquarters building has a Biketown system of their own. Nike is not only the title sponsor of Portland’s bike share system, they also provide around 400 bikes to employees and visitors of their HQ campus and nearby offices. The bikes are often taken from the offices to nearby transit centers.

Questions of potential operators in the RFI make it clear that the City of Beaverton wants to have robust access to system data and make sure the system is accessible to low-income people, is available for people without credit cards, and for people who don’t speak English.

One key detail not covered in the RFI is the geographic service area. Given the urban form and land use of Beaverton, this will be an important thing to get right.

Our Beaverton-based, Washington County contributor Naomi Fast says being able to use the bikes on major arterials will be a must. The caveat with is those arterials are managed and owned by the county and have 45 mph speed limits which could be a recipe for concern. “I think a dockless bike system in downtown Beaverton would succeed,” Fast shared with me today. “But even better would be if people found it possible to use the bikes along unincorporated Washington County arterials that border and go through Beaverton.”

The RFI was released the morning after an election that cemented a more multimodal slant in Washington County transportation politics.

The city will accept responses to this RFI until early December and use the responses to prepare a request for proposals.

A quick look shows Beaverton’s bikeway network is even more disjointed than Portland’s, with a lot of spread out segments that do not connect(source: Google Maps). Could it be that we need this project to succeed to push for more consideration of light transportation options?

It’s really true, bike lanes just end, speed limits are high and average car speed feels even higher (as observed from my lunchtime walks). It’s a shame as there’s some great low stress multi use paths but they are islands in a sea of high speed car traffic.

And some of the best MUPs are broken up by roads with no direct curb cuts for getting across.

Beaverton is making some improvements. The new multi-modal path from the Beaverton Transit Center to The Beaverton Central Area is great, and I hope its plan to extend further west is true. But until Beaverton can go to the mat with Odot and come up with a way to connect “Downtown” Beaverton with the rapidly developing Beaverton Central Area no amount of Bike Share will help. Overpasses and underpasses are expensive and controversial, but any lesser way of crossing the crazy traffic of Canyon and Farmington will not get the job done.

You are correct. Canyon literally is a Canyon that separates the two halves of Beaverton. It is hemmed in by railroad tracks and historical buildings, with no room to expand, and we all know they will never reduce it to 3 lanes for a bike infrastructure project. Perhaps, at some point in the future, they could forbid left turns, cannibalize the median, and use the space for a protected cycle track on the sidewalk side.

The Biketown bike share bikes stored at Millikan Way station should not be for the exclusive use of Nike employees. The station is for use by the general public, not just Nike employees. There needs to be some type of last miles shared mobility option available for the general public at or near the station before Nike is allowed to put their exclusive employee-only bikes there. This is likely illegal, or at the very least complete BS, and TriMet should be sued for allowing it. I don’t care what kind of twisted rationalization they have, its total BS.

They are not “stored” at the Millikan MAX station, they are left there by Nike employees. You should go up one more stop to Nature Park and see how the employees just leave them all over the sidewalk most days. It’s not the fault of Nike or Trimet, it’s the Nike employees.

The Nike bike share bicycles are so heavy, and would have been tremendously better if they had electric assist.

Yes. Seattle does, for one. Lime is one vendor who has test-piloted some e-bikes here (see the tram closure earlier this year). They haven’t launched in Portland yet, though.

I’ve test ridden the Lime ebikes in Seattle and they were awesome! I was able to bypass a 3 mile long traffic jam on the bike even going uphill. I was the only guy taking the lane as there are very few Seattle bikers.

One option could be for Beaverton and Portland to renegotiate the Biketown contract (expiring soon in Portland) to create a relatively seamless expansion into Beaverton. The greatest challenge being the combination of Lyft/Uber in Biketown and the associated financial and operational complexities. Maybe add lighter bikes and e-bikes in the process if going this route.

Given the conditions and travel distances in Beaverton I’d see a dockless, e-bike program (Lime or Jump) as easier to implement and more successful in the short term. Ultimately offering both would be best. They could add scooters too. Lime-E just launched in Calgary of all places. This will be interesting to watch. As shared micro-mobility expands into suburban areas we could start witnessing the demise of SOV car travel.

Having the same system in Portland/Beaverton would be great! I imagine there are a huge group of people who live/work at either end and this would it make it easier to use transit or not take their own bike with on the MAX/bus….or having ebikes to get over the west hills easier would be even better or maybe they will build the portland/beaverton bike tunnel 🙂

LOL yeah right. I love everything bicycle-related but this project will not work. The kind of “interested but concerned” cyclist that tries out a bikeshare bike in Beaverton will never try it again.

Get LimeBike out there already. In the Twin Cities LimeBike has moved to the suburbs, having contracted with both Edina and Golden Valley in addition to St. Paul. I don’t get to Golden Valley, but I see LimeBikes all over Edina.

Should be able to make it work in Beaverton too, despite the major bikeway gaps in the central part of the city. Beave has a better than average bikeway network as suburbs go.