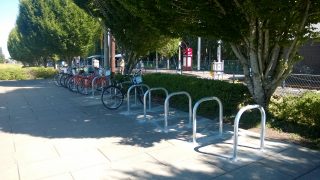 Quite a lineup of bike parking near the platform.
(Photos courtesy TriMet)

In May, we shared the news that bike parking at the light rail stop was sometimes being overwhelmed by the red bikes now being used by the sportswear maker’s workers as they headed to and from the company’s nearby headquarters.

TriMet active transportation planner Jeff Owen sent a note today with the good news that TriMet responded to these concerns June 30 by adding 6 new bike racks (which comes out to 12 new spaces) to the rail platform area.

Another 12 parking spots remain in TriMet’s nearby key-locker parking. According to TriMet’s website, at least one of those lockers is available. TriMet charges $25 every six months for private locker rental. 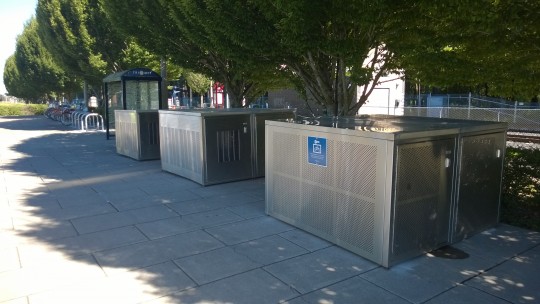 It’s great to see bike share helping improve the transit connection to Nike, whose millions of dollars in payroll taxes are a hugely important source of revenue for TriMet but which has struggled to reduce its employees’ reliance on car commuting, in part because it’s worked so hard to keep its operations on a closed suburban campus surrounded by parking lots. This is exactly the sort of “last mile” link that bike share systems are best at — a perfect way to quickly move people from transit stops to their destinations despite car-oriented suburban environments.

“We always welcome ideas and feedback on bike parking at transit stations,” Owen writes. “The best way to reach us is to send an email to bikes@trimet.org.”

Not only does Portland’s adidas clothe the German side in the World Cup, but as well it sports an open campus in the city on two bus lines, a major bikeway, just minutes from the MAX Yellow Line. Time for the tax dodging outfit in WA county that provides outfits for that poor Brazilian team, to get with an active transportation program!

Chris I
Reply to  Lenny Anderson

Nike has an opportunity to improve their employee’s access to MAX by taking down the fence and building a MUP through the woods north of Beaverton Creek, but they choose not to because they want to maintain their secluded jogging trail and limit “unsavory” activity. Instead, they force their employees to add an extra 1/2mile to their walk, discouraging the use of public transit.

q`Tzal
Reply to  Chris I

I used to live near here and use this stop in the early morning for my commute.
For years I’d witnessed first hand the “unsavory elements” using their own trail due north through the woods to Nike’s grand entrance on Jenkins.

Perhaps there is some tax/zoning/don’t-want-to-be-part-of-Beaverton reason for a more direct route not being established.

Over the last ten or so years, the area has changed much due to widening of the road to the west of the woods, presence of the Westside Trail just to the west, increases in business and office space to the south of the Max tracks, and THPRD nature park to the west. All of that development has brought with it, increases in security patrols to this area, which has reduced the occurrence of good old bad times some people used to use the woods for.

Unanswered questions about what Nike’s long term plans for that wooded tract are, may be the bigger issue. Were the company to put a nice MUP through the woods to the train station, and then later decide to eliminate it along with clearing the woods for more buildings and parking lots, that may not go over so well.

GlowBoy
Reply to  Chris I

Nike has a shuttle that meets every MAX train and takes employees to campus and their other office facilities around Beaverton.

Fantastic. Who needs to walk when they work at a company that sells sportswear, right? Clearly, half a mile would be too much.

GlowBoy
Reply to  Chris I

Actually, it’s a full 1.0 miles from the Beaverton Creek MAX station to the nearest building on campus. Also, the shuttles connect to other further-flung Nike buildings besides just the main campus.

Lenny, does Adidas have a substantial bike-share program, or any other form of active transportation support? I don’t recall any articles here in BP about Adidas.

Do they need a bikeshare program if they’re more centrally located?

Nike, rather than Trimet, should be the one providing parking facilities for Nike’s red bikes, or offer to foot the bill for the parking Trimet provided. Nike providing an on campus bike share system, is a possible step forward though, to the kind of active transportation system Lenny Andersen may be thinking of.

Chris I, sounds like you have info on Nike’s doings, that some of us don’t. I grew up in this area, and am glad Nike hasn’t developed the woods their private jogging trail is located in. If a trail straight through the woods from the south entrance to the Max station would encourage more employees to walk, or use the red bikes to get there instead of driving, that could be something to consider. As for active transportation, it’s food for thought seeing the security guy’s riding around the jogging trail on their ATV’s.

To be clear, the issue with Nike share bikes filling up the racks at Millikan Way and Beaverton Creek was reported in May, a couple weeks after the program was launched. I’m not seeing a freeloading issue here, because on recent visits to those stations (I’m at Millikan Way every morning) I’ve never seen more than one or two Nike bikes there. Looks like the people running the program may be working out the bugs in the system.

Also minor point of clarification, the bikes are in two colors: black, and a very bright orange that would be very difficult to confuse with red.

“…In May, we shared the news that bike parking at the light rail stop was sometimes being overwhelmed by the red bikes now being used by the sportswear maker’s workers…” andersen/bikeportland

Call them orange if you want. They look reddish orange to me, but I don’t think red is an unfair description of color. I hope the program becomes hugely successful, with hundreds, even thousands of Nike employees finding regular use of the bikes to be very practical. Maybe it’s not an issue, but I’d like to think that the Nike program’s use of Trimet provided bike racks won’t interfere with Trimet customers need to use the racks for their own personal bikes.

Wow, good deal on the locker parking. I pay $15/month in the Lloyd district.

I wonder when the government is going to get around to giving out tax credits for bike purchases or bike locker expenses. You can get a $7500 credit for buying a Chevy Volt, and it’s not even an electric-only vehicle.

I forget the logistics of it, but isn’t there something like a $20.00 a month deduction that your employer can pass on to you for bike commuting. I know there was something like that at one time, but not really sure if it’s still around…I’ve never been in a job where it was even a possibility.

It’s a federal credit that’s still around but must be administered through the employer, and very few actually do due to the paperwork involved. (We’ve brought it up with large employers like Google and Apple here in Si Valley).

Probably about the same time people stop thinking bikes are toys. Right now, I’m sure people would equate a bike purchase tax break with a jet-ski purchase tax break. Plus, the political aspects of giving “those bikers” another way to “freeload” when they already “don’t pay taxes” would be difficult to manage… [eyeroll].

This should happen at all the MAX stations.

Let’s keep fee-based bike parking on the DL or Steve Novick might get ideas.

Bikes at Nike, personal and shared. I used to be a shoe tester, and I’d ride over after work, and lock up in the mostly empty racks. I wondered why no one rode their bikes! Then I got on contract there. No one parks their bikes OUTSIDE. Bikes everywhere inside the buildings, both personal and share bikes.

Come, and they will build it.

I agree that IF Nike bike use necessitates expansion of the racks , them they should also foot the bill