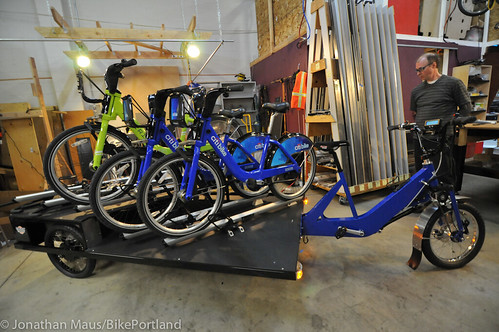 This custom ‘Truck Trike’, made in southeast Portland by Stites Design, will soon be on the streets of Manhattan hauling Citi Bike bikes between rental stations.
(Photos J. Maus/BikePortland)

When a local bike company toils on cool projects for many years, then finally breaks through to something big, we get really excited. Such is the case with Stites Design, the southeast Portland company that has sold a custom version of their electric-assist Truck Trike to Alta Bicycle Share for use in the Citi Bike bike share system in New York City. 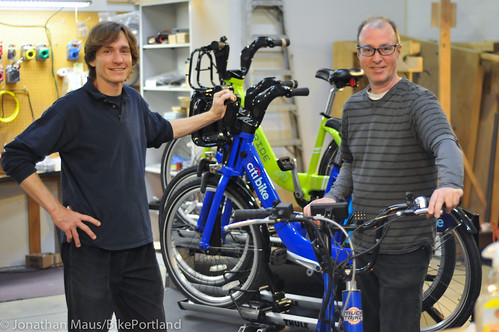 Stites (right) and his employee Brian Hall in their shop today.

Bill Stites has spent the last two decades building custom, one-off human-powered vehicles (and at least one artistic bike parking structure). About five years ago he started R & D on a cargo trike that had enough power and payload that it could legitimately replace a truck. He called it the “Trucker Trike” and we first reported on it in 2010 when he debuted it at the Pedal National Bicycle Show. A few months later we caught up with Bill and took a more in-depth look at his creation.

Since then, Stites’ business — and the trike — have gone through a lot of changes. He now has an equity investor, a full-time employee (mechanical engineer Brian Hall), and he’s got several trikes in use around the country (including one on the campus of UC Berkeley where it’s used in their recycling program). Since 2010, the trike has been refined and re-engineered in many significant ways and Stites told me at his shop this afternoon that they are now ready for mass production.

On Monday, the Truck Trike will be in the spotlight as Alta Bicycle Share hosts a media event and launch party prior to sending it off to New York City. As a new tool in the Citi Bike operational arsenal, the Truck Trike will focus on the task of rebalancing — which means it will ferry bicycles between kiosks so that bike share users won’t confront an empty (or full) stations. (For a look at how rebalancing is usually done, check out our behind-the-scenes visit to Capital Bikeshare in D.C.)

The Truck Trike has several advantages over the mid-sized “Sprinter” van currently used by New York City Bike Share employees. It has a much smaller footprint, which means it can roll in bike lanes when traffic backs up. With an operational speed of about 12-14 miles an hour, and the ability to use the carfree bikeways, the Truck Trike can potentially get around Manhattan at about twice the average speed of a truck or van (average traffic speed in Manhattan being about 7 mph). It also boasts a much narrower turning radius than a van. Stites says it can turn around within the width of a standard vehicle lane. It’s also, obviously, much more environmentally-friendly than a vehicle that burns fossil fuels. It’s cost effective too: At a price of about $8,000, a company could buy several of them for the price of one new van or truck.

The Truck Trike that will be used by Citi Bike is powered by two motors — the operator’s legs which power an 8-speed internal front hub, and a 500 watt electric battery that drives one of the rear wheels (a motor for the other rear wheel can be added if necessary, thus doubling the power). Because the rear wheels of the trike are driven independently by separate motors, there’s no pesky transmission system or chain-line that has to be considered. This lack of needing to connect the rear wheels to the cranks means Stites can create custom rear trailer designs.

In the case of the Citi Bike Truck Trike, they’ve designed a long (96-inches) and wide (54-inches) trailer with a low cargo bed to make it easy for workers to roll off the 42 pound bikes. The trailer can currently hold up to five bikes. That’s a load of just 210 pounds; child’s play for the Truck Trike which boasts a payload capacity of 600 pounds. The trike itself weights about 275 pounds.

Check out a few more photos below… 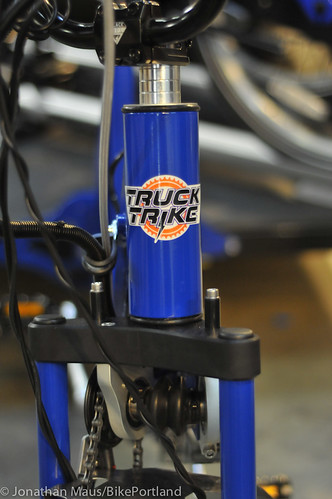 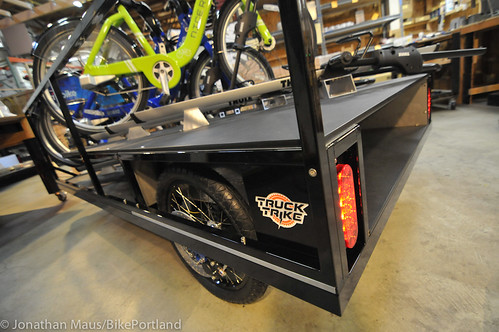 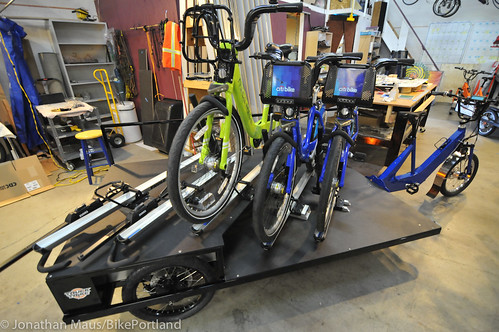 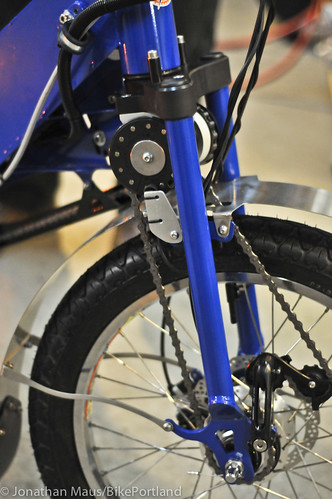 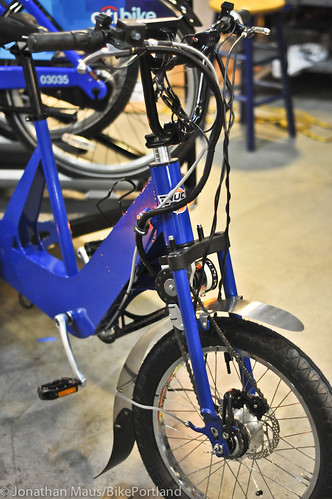 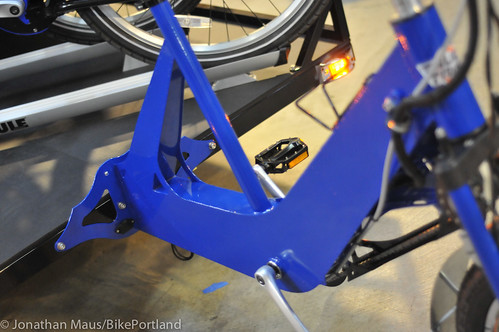 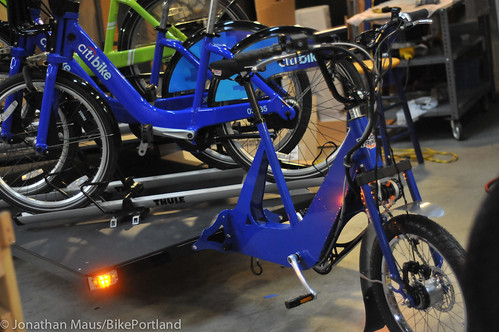 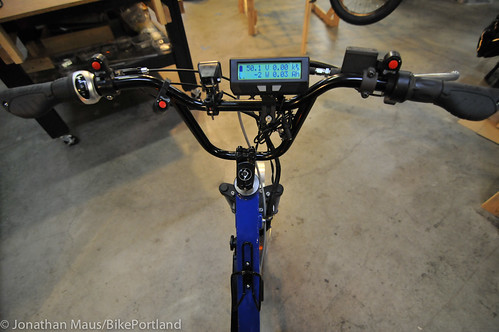 Good luck Bill! We rooting for the trike to do great in New York City and hopefully orders start coming in from cities across the globe! 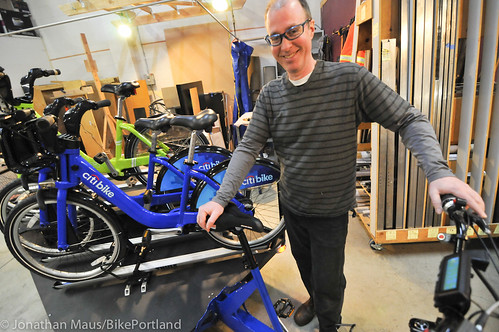 Couldn’t happen to a nicer guy! Way to go Bill!

I agree, way to go Bill. You have worked hard over the years and it great to see your designs get recognition. Sweet!

But I have to wonder if the trailer might be better off with a different configuration. Seems like it could be longer and narrower with bikes 2 by 2, perhaps tilted up with front wheel on a bar or hook, as opposed to 4 bikes sitting diagonally on about 70% of that bed.

That would use the trailer space more efficiently but would make loading and unloading more difficult. This looks like a good design for getting bikes into and out of the bike share stations as quickly as possible.

Is there a max width that a cargo bike can be in Portland or NYC? That seems rather wide for many of the local bike lanes, approaching the width of a small car. Of course that is fine, since bikes are allowed a full lane, but this seems a couple feet wider than most of the B-Line trikes.

Bill, way to go! there was something inherently wrong with using motor vehicles for bikeshare support – here’s hoping this revolutionizes the rebalancing & is a huge success!

And yes to the rebalancing happening without stinky trucks! I recall a conversation right here on bikeportland about this possibility a while back. Very excited to see it happening, and with Bill’s machines, to boot.

Hope this design works well on the job. Lets see a picture of the trike loaded with the peak payload of 15 or 16 bikes. Also be interesting to know what the range on a battery charge, is anticipated to be.

“Lets see a picture of the trike loaded with the peak payload of 15 or 16 bikes.”

I assume this is the number of bikes that can be fit into one of the Sprinter vans that Alta uses now, wsbob? If your point is that the Truck Trike is somehow deficient because it can’t do everything in exactly the same proportions as the truck it is, arguably, replacing, then I think you’re missing the point, missing the advantages (in cost, maneuverability, energy source, local US-made content, etc.) that Bill’s bike has.
If you’ve ever pedaled a large or unwieldy load around town you would know that another, smaller but no less trivial, dimension of human powered transport solutions is the fact that it puts a smile on nearly everyone’s face. Hauling ridiculous (seeming) loads around, loads we are not used to seeing hauled without fossil fuels, catches people off guard, surprises and delights a surprising number of folks. There’s no harm in this, and, it begins the process of habituating people to think of, realize that, human power is a real alternative, one that works today and could expand tomorrow.

“I assume this is the number of bikes that can be fit into one of the Sprinter vans that Alta uses now, wsbob? …” 9watts

I have no idea how many bikes fit into a Sprinter van. If you’ll read this story, you’ll find it says:

“… The trailer can currently hold up to five bikes. That’s a load of just 210 pounds; child’s play for the Truck Trike which boasts a payload capacity of 600 pounds. …” maus/bikeportland

Also mentioned, is that the bikes weigh 42 lbs. The Truck Trike is designed to carry the weight of an additional 10 bikes. A demonstration or explanation of how carrying a total load of 15 bikes might be accomplished with this Truck Trike design or one based on it, seems fair. If the ‘re-balancing’ can realistically be accomplished with pedal assist Truck Trikes, I think it’s a great idea to do that.

But about the payload and hauling more bikes, I could easily imagine Bill’s Trike pulling a trailer (the kind with a hitch–not the deck of his trike which curiously was referred to as a trailer in the article) that could accommodate a bunch more bikes.

Congrats Bill! Eager to see how all the licensing, etc plays out. Glad to see more freight trikes on the road.

Neat, I think I’ve seen one of these on Harrison. Correct me if I’m wrong, but this is an e-bike and the last time I looked e-bikes are not allowed in NYC.

I want to see the thighs after six months on the employee whose riding that thing! Boom!

B-Line’s right here in town, and we have hills! I’m sure Franklin could tell you a thing or two about this (the prospects for bulking up your thighs riding a trike (much) like this one).

I’d love to see some pictures of the front chain(s). How that works with a turning wheel is confusing to me!

What a cool trike, way to go!

I want to see one of these loaded and humping over an East River Bridge. Take a picture please.

Great, except electric bikes are not legal in NYC, and won’t be legal on the bike ways.

We were requested to outfit a pedal sensor so that the electric drive cannot be used unless the driver is pedaling forward. I haven’t analyzed the legal letter of this NYC law, but if Psyfalcon’s reference is correct, it should be good to go.
Most of our Truck Trikes are set up so that human and electric power are operated independently, with the driver determining the mix.