I was out of town when e-scooters launched in Portland last week, so yesterday was my first chance to observe them.


“The law itself leaves it vague as to how far you can ride it on the sidewalk.”
— Charley Gee

First. Why does BikePortland even care about scooters? Here are a few reasons:

I strolled around Pioneer Square and Waterfront Park to watch and see how these new wheeled vehicles were being used. My top takeaways are that the scooters are: very popular with those who use them, way too scarce, and in need of a few legal tweaks.

➤ Scooter riders use bike lanes, so it behooves us to get to know our new neighbors.

➤ Scooter riders could become a vital new voice that helps push for more bike/scooter infrastructure, new laws, and so on.

➤ Scooters challenge the driving (and to a lesser degree, cycling)-dominant status quo, and as such, they will receive a lot of hate from existing road users. Not only can bicycle riders relate to this type of othering, it can also expose how willing people are to change. Like congestion pricing, road diets, or protected bike lanes, e-scooters are a Rorschach test that help us better understand people’s perspectives.

On that note, let’s dive in…

A lot is being said about helmets. They’re required by law (ORS 814.534) for all scooter riders. If you get stopped and cited by a police officer (and that’s a big if), the fine is $25. Keep in mind, the courts will waive the fine for your first offense if you can show that you own a helmet and are willing to use it.

When I posted a photo of a smiling group co-workers set for a crosstown, happy-hour-seeking jaunt on social media yesterday, several people expressed concern about their helmetless heads. I question the sincerity of that concern given the vast amount of illegal and much more dangerous road behaviors we see around us all the time, everyday. It’s also strange to me how many people are suddenly very focused on traffic law only when something new and different — and potentially upsetting to the status-quo — arrives on the scene.

I think the existing Oregon laws that regulate electric scooters (and bikes for that matter) are woefully outdated and out-of-touch. It makes no sense to me that the law requires helmets for scooter riders — yet does not require them for riders of Segways, bicycles, or electric bicycles (or auto users for that matter, given the velocity they’re used at and how many people are hurt/killed while using them). No lawmaker ever considered these types of e-scooters, or this type of use, when they drafted the existing laws. It should be changed to allow helmetless scooting.

Without any other valid arguments against these new vehicles that are very popular, extremely efficient and much more friendly to the health of people and our planet than cars, we’re seeing a lot of people focus on helmets and sidewalks. The helmet thing is understandable given the pervasive paternalism of our driving-dominated culture. The concerns about sidewalk riding are a different beast. 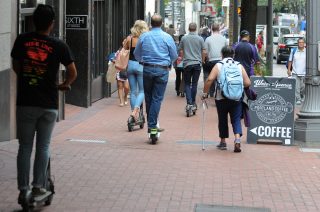 They rolled into the street at the first opportunity, which the (vague) law seems to allow.

Unlike bikes, e-scooters are prohibited from all sidewalks. But according to Oregon law (ORS 814.524), people are allowed to ride e-scooters on the sidewalk, “to enter or leave adjacent property.” To me that sounds like an exception to allow people to scoot on the sidewalk from a parking spot to the street, or vice versa. I asked active transportation lawyer Charley Gee to help clarify. “If the scooter was on property adjacent to the sidewalk (say a patio in front of your building), I’d say you could ride it on the sidewalk to the point of reasonable exit from the sidewalk (like the end of the block or the nearest driveway),” Gee said. “But the law itself leaves it vague as to how far you can ride it on the sidewalk.”

In the end, police are likely to focus their resources on the most dangerous and egregious infractions. And in my opinion, people safely using a tiny wheeled device that goes no faster than 15 mph should not be a focus of enforcement — or of public outrage.

There’s an interesting comparison to make between these “new” e-scooters and the infamous Segway. Launched in 2001, the Segway was supposed to transform urban mobility forever. That never happened and the product has been relegated to tourist novelty. That historical footnote aside, what I find more interesting is Segways impact on laws.

Seeking to sell as many of the devices as they could, Segway lobbyists worked hard to influence lawmakers across the country. They succeeded wildly and today a vast majority of states have a separate set of laws that govern “Electric personal assistive mobility devices” or EPAMDs. This is the Segway Law. In Oregon, Segways are defined in ORS 801.259 and as a result they are regulated more like wheelchairs and walkers, than bicycles or mopeds. They don’t require helmets, they have more leeway in using crosswalks, and they are allowed on all paths — including those in Portland city parks. Which brings me to my next point.

Scooting on Parks facilities like the Esplanade, Springwater, and Waterfront Park

As you’d expect, many people are riding e-scooters on these wonderful and safe carfree paths. The problem is, current Portland City Code 20.12.170 (D) prohibits it. This is not good policy and if scooters stick around, we should consider amending this law to allow them. 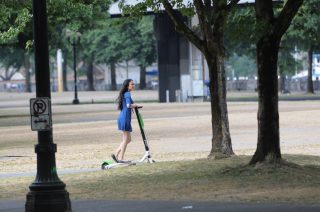 Paths like the ones in Waterfront Park should not be off-limits to scooter users.

You’ll note that Segways (referred to as “Human or personal transporter system” in City Code) are allowed in Portland Parks facilities. So are those huge, four-wheeled tourist surreys and electric bicycles and skateboards, and so on. I don’t see a good argument against e-scooters in Parks facilities beyond the existing, outdated City Code. And keep in mind, the paths in our parks are not recreational facilities. They were paid for with federal transportation funds. As such, there’s a strong argument to be made for regulating them as transportation corridors. But don’t take my word for it, ask the Federal Highway Administration.

The final point I want to make is that it’s still too early to assess the impact these scooters could have on our transportation system because there aren’t enough of them available. PBOT spokesman John Brady told me this morning that we currently have just 1,000 scooters on the streets. That means about 800 of them are in the Central City, with the rest east of I-205 (at least in theory). Micro-mobility expert and scooter/bike-share industry insider Michal Nakashimada recently told Sightline that Portland’s Central City could support 4,000 scooters but the ideal cap should be dynamic based on usage.

The success of these shared systems relies on easy accessibility and plenty of stations and/or plenty of bikes and scooters available. Portland’s pilot program will limit the total amount to 2,500. That’s probably not enough, but we’ll have a much better sense of how successful these scooters will — or won’t — be once we get more of them on the streets.

In the meantime, I say let’s chill out a bit and keep our eyes on the prize.