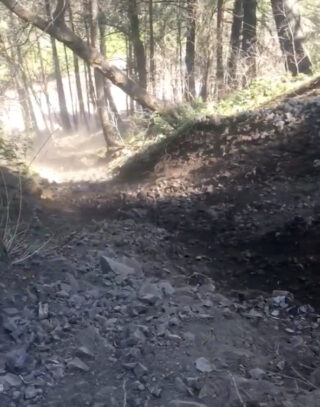 Still from USFS video of rockslide above Historic Columbia River Highway in the Gorge.
(Watch video below)

Bummer news from the Oregon Department of Transportation: New rockslides have set back their plans to reopen six miles of the Historic Columbia River Highway that have been closed since last fall due to the Eagle Creek Fire.

The slides happened on the section of highway between Bridal Veil and Ainsworth State Park. As we reported last month, ODOT hoped to reopen that section of road with an experimental new lane configuration in September.

In a statement yesterday, ODOT Region 1 Manager Rian Windsheimer said, “This setback is a real disappointment to us. Our crews have been working hard to get these areas cleared. But there’s plenty to do before we can safely reopen the road.”

Video (below) of one of the slides near Horsetail Falls, taken by the US Forest Service, shows rocks rolling down a steep hill directly onto the highway.

The new lane configuration ODOT expected to reopen the highway with this fall would have allowed drivers to only use the eastbound lane while the westbound lane would be for walking and biking only. Many of you expressed excitement for that plan; but at least one commenter on our story (with the username “local resident”) wasn’t happy about it at all:

“You do all realize that there are people who live out here, though, correct? Many people from Portland like to think of (and treat) the Gorge like it’s their playground, but this is our home, and this is causing a lot of frustration and inconvenience to those who actually reside here. Things like this are part of what creates animosity towards bicyclists; the idea that miles of a working road should be shut down just for people to have a nice bike ride (when there are many other bike-only paths in the area). We are happy to share our lovely space (we think it’s awesome—that’s why we live here!), but this is almost like a slap in the face to those who live here.”

ODOT hasn’t announced a new timeline for the reopening. At least now they have more time to make the case for the carfree lane and (hopefully) mollify those who don’t approve of the idea.

The angry local resident assumes that bikes are only for recreation and that when they drive their SUV back and forth to Costco for cheeze doodles that is somehow “working”. It might be time for these characters to discover the benefits of cycling for transportation before they find out that happy motoring was a short term phenomenon and they need to make other plans.

You forgot to call them a NIMBY. That usually helps.

I can understand resident’s frustration to have to travel significantly out of direction, but I know that ODOT staff were careful to plan the one-way section begin east of the last residence in the corridor so that no one got stuck having to drive way out of the way.

Obviously this person does. Without context, we can’t know why, or how many others are similarly affected.

Luckily, this is not our problem to solve.

If they are truly “local” then they know how much of a bitch I-84 is in the winter, and how many speeding truckers wipe out and close it. I’ll take a planned ODOT detour any day…

You actually nailed the psychology there pretty well. And since it is for “recreation”, the cyclist is somehow gaming the system for their pleasure…unlike the dutiful driver who has OBVIOUSLY paid their “fair share” (even though they couldn’t tell you what that amount is).

Why does the NIMBY just hate on bicyclists? Especially since the congestion on the Historic Highway is almost entirely due to the over abundance of motor vehicles?

a few small rocks..still looks rideable to me…

Take the money from the border wall and use it to build retaining walls instead.

Honest question: there are houses on the affected section of the Historic Highway? If not, how is this an inconvenience to residents of the area? And as Many Hats pointed out, that road is impassible on weekends due to car traffic anyway.

We would all like to claim as private property infrastructure that’s built with private dollars: the parking in front of our houses, public roads, etc., but that infrastructure is built with public money, and sometimes the needs of the majority will take priority. To echo your comment, “there are many other roads that cars can use in the area.”

I’m not sure if “the needs of the majority” includes recreational cycling through the gorge on weekends. Are you sure that’s the metric you want to use?

Just looked on Google street view and couldn’t find a single private driveway. So yes, the commenter is lying, they don’t live there.

How do you figure that?

I’m pretty sure I took that video. I’m 100% sure that I was on the trail crew that did. That slide took out our trail, so we had to hike out via the highly-unstable Oneota Gorge trail and then walk the road back to horsetail falls.

ODOT got notified by the railroad company, since rocks were bouncing all the way across the road, through the fence, and onto the tracks. The fences have sensors to detect this sort of thing, apparently. In total it was about 10 dump truck loads full.

That was quite a day.