A two-year project to repair and upgrade the Burnside Bridge has started and it’s having an impact on everyone who uses it.

For bicycle users, the changes are mixed: In one direction conditions are much more cramped, in the other, some say it’s actually better than before.


Pre-construction conditions on the bridge were four five standard lanes (two westbound, three eastbound), two unprotected bike-only lanes, and sidewalks on both sides. Due to the need to stage equipment, the county has changed the configuration to: three standard lanes (two eastbound, one westbound); one physically protected, eight-foot wide walking and rolling lane on the south side; and a narrower shared sidewalk on the north side.

There was some talk at the County about having two standard lanes and making a dedicated bike lane on the bridge, but the City of Portland wanted to keep two eastbound lanes to have more capacity for drivers leaving downtown at the end of the workday.

I observed the bridge during the evening peak and saw major congestion on the road. From northwest, across the river to northeast, Burnside was all brake lights. Every time I see this daily gridlock I wonder, “Why the hell do we still make it so cheap and easy for people to drive such large and socially awkward motorized vehicles into our city?”: 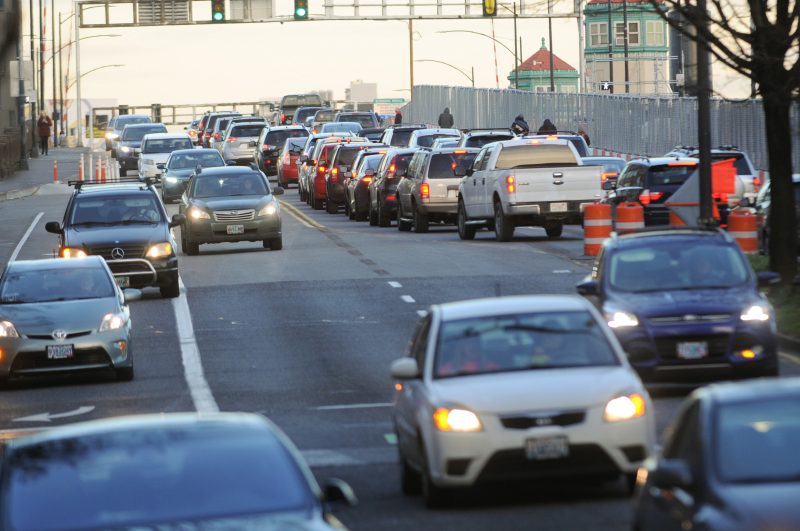 The sidewalk headed into downtown wasn’t as congested, but the mixing of bicycle users with a steady stream of walkers was difficult: 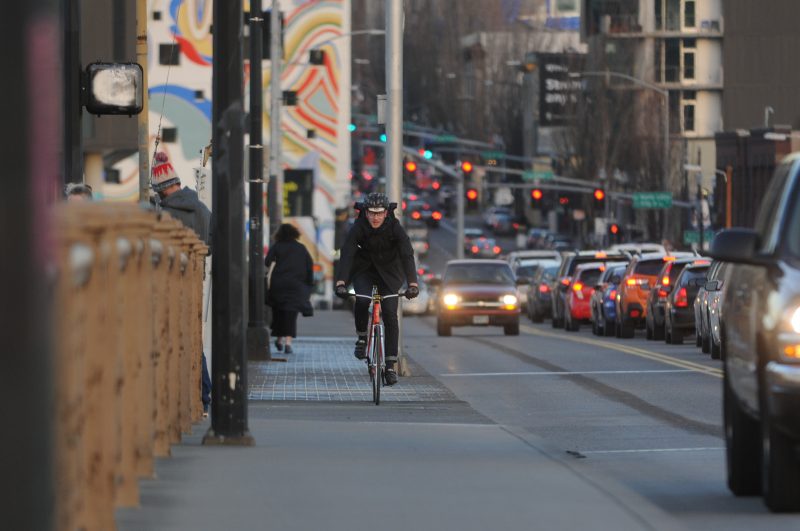 The shared protected lane on the south side of the bridge was much nicer to navigate. While it’s not nearly wide enough to mix bikers and walkers, the concrete jersey barrier protected makes a huge difference. I’m very happy that many people will get a sense of what real protection feels like (not the plastic wands or parked cars or measly stripes of paint they’re used to). 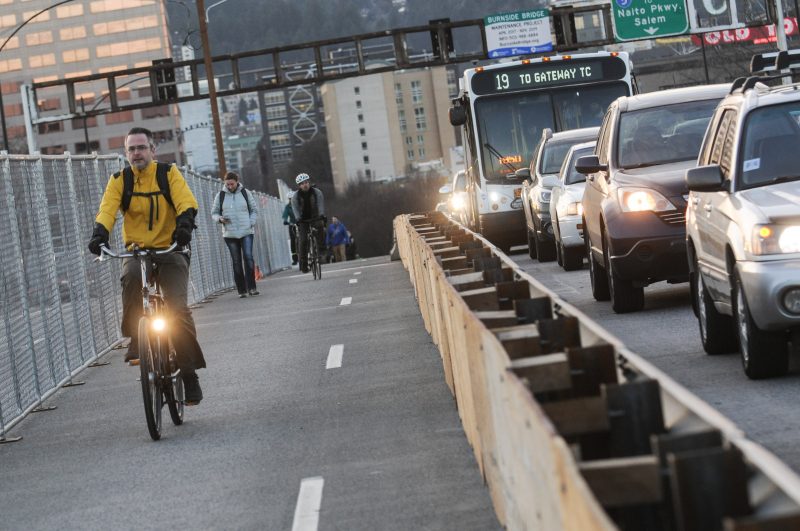 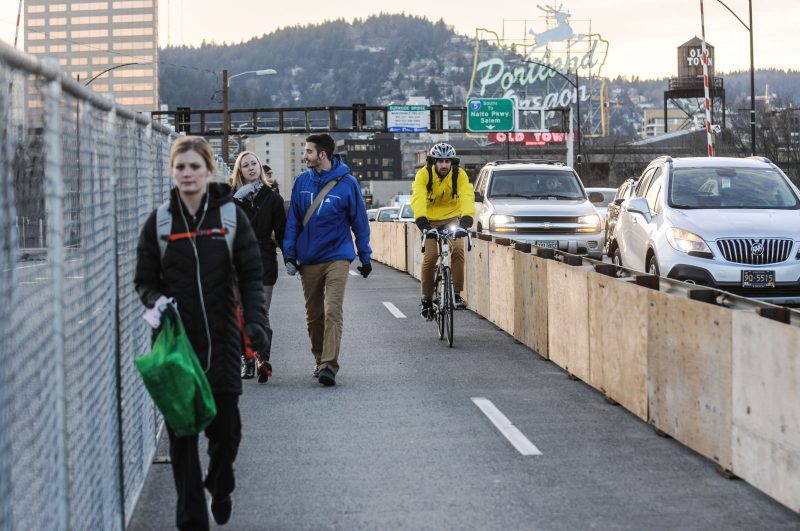 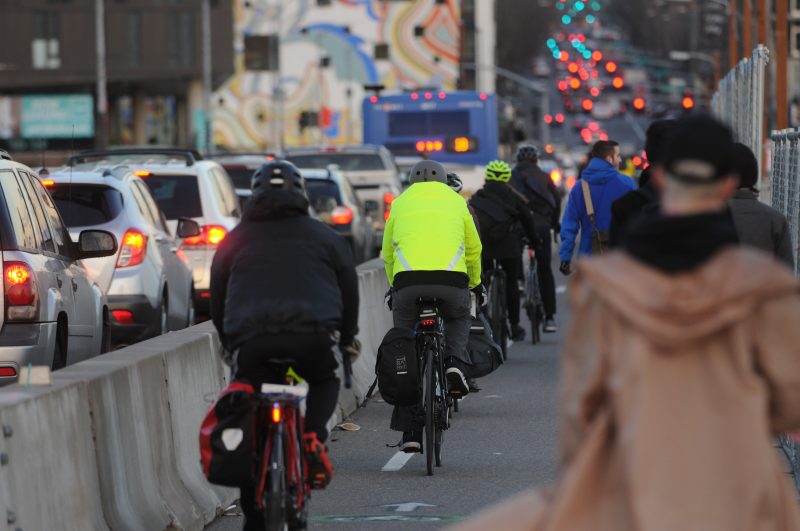 We asked for feedback on Instragram ealier today from folks who’ve ridden it. Here’s what we’ve heard:

gabrielamadeus: It is such crap. I can’t believe the width is to code around the light posts.

nwsatire: I don’t. Back to the Hawthorne Bridge.

ambpdx: The physical separation from cars on the south side is awesome!

barnharty: I bike westbound every morning before sunrise and it is sometimes fine, sometimes extremely dangerous. Sometimes people refuse to move over and I’ve almost been hit by a person swinging their backpack, which would’ve easily knocked me into the car lane. I don’t feel that nervous on it because I’m a pretty experienced cyclists and I trust my handling and everything, but I can imagine it would be scary for someone new to biking. Overall it’s ridiculous that it is someone’s official plan. Someone probably got paid quite a bit of money to decide what is the best and safest way to go about things and This is what they came up with.

sheena_longbo: I bike westbound in the morning when it is still dark, and I have actually had to get off of my bike and walk it into the road to pass people taking up the whole sidewalk with large garbage bags/weaving when they walk. For the most part I haven’t had many issues but I feel like it wouldn’t take much for someone to cause a cyclist to fall into traffic, or if someone did want to harm someone it would be difficult to get away from them.

ky_berg: I cannot state strongly enough: someone is going to be killed riding west on that sidewalk. I am riding west in the vehicle lane and square in the middle of it and you should too. The current model is unacceptable!

justinparty: South side is actually quite wonderful. North side is pretty rough, especially at the light poles. Communication is key, but people gotta ditch the headphones. Sometimes I ring a couple times and give an “on your left” only to still scare the shit out of them when I ride by.

cgerlt: The north side is cramped especially around the many poles. Will be worse with increased summer foot and bike traffic. South side is fine, a little more room and no poles!

And a reader who works as a messenger on weekends sent us a photo of three young people walking shoulder-to-shoulder on the sidewalk. “This is a regular sight on the weekends when I’m working and forced to ride in the lane because they are too busy taking selfies,” he wrote. “Having to ride to the far left of the sidewalk with pedestrians on a bridge where traffic usually gets above 30 mph is just silly… It’s just bad planning.”

Do you ride this bridge? How are the changes treating you?

I’ll send this post to Multnomah County just to make sure they’re aware of the feedback.

[NOTE: This story was originally posted on 2/15 but due to a technical glitch the comments section didn’t display until 2/19. Sorry for the inconvenience.

The south side of the bridge, for walkers and east-bound bikers, is minimal but it works. People walking and biking can share a limited space without major problems. Note: the space is sterile, with barriers on each side, so there is little reason to stop or hang out, and there’s only one point where a person can enter or leave the path between SW 2nd and MLK. So, there’s minimal “turbulence” in the flow of traffic. Also, working bikes have been discouraged from using the bridge–so much for bike commerce.

yes! sorry everyone. Major technical glitch messed with our display. Hopefully it has been sorted out for good. If you see anything strange, please let us know. – The Management.

“Pre-construction conditions on the bridge were four standard lanes (two in each direction), two unprotected bike-only lanes, and sidewalks on both sides.”

There were in fact five standard lanes prior to construction: two westbound lanes and three eastbound lanes.

Also, it should be noted that even when there were three lanes it was not uncommon for there to be vehicle back-ups in the eastbound direction during the evening peak commute.

I’d like PBOT and Multnomah County to monitor the vehicle volume/speed/throughput during this temporary lane reduction. I have a hunch (or maybe just wishful thinking) that the impacts to vehicles are not as detrimental as people may think (or the impact is within an acceptable range). If the data does indicate this, then it may support recommendations to keep the lane reductions going forward after construction is complete. The real challenge will be to determine whether the additional space should be for bus lanes, protected bike lanes, or wider sidewalks.

It’s pretty obvious that the bottleneck is the light at Burnside and Grand. The bridge sould be two GP lanes in each direction with a bus only lane eastbound.

John Liu
Reply to  Chris I

The Burnside Bridge center lane can be a direction-changing bus lane – W/B in mornings, E/B in evenings. Maybe there can be some way for it to lead to a bus-only E/B lane on East Burnside.

There’s enough space on the bridge to double the length of both sidewalks, add an east-bound bus lane, AND protected bike lanes on each side

I haven’t biked this myself, but from the photos it seems obvious that we missed a real opportunity to trial a shared bus/bike only lane going westbound. There is clearly not enough room on the sidewalk, and I dont see how any busses are getting through that traffic.

damn near impossible to navigate westbound for a B-Line trike

I commute over the bridge about 4 times a week. West bound on the sidewalk can be a little tight between lampposts and pedestrians but manageable with a few courtesy rings from my bell. I have noticed larger, cargo type bikes have to take the lane…there’s just no room to navigate on the sidewalk. East bound is better than before! It’s protected. It’s wide. It’s easy. There’s a somewhat dangerous potential to get right hooked at the MLK signal…before construction, right turning car traffic had to maneuver to a turn lane to the right of the bike lane. No such luck now. I would like to see the protected barriers become permanent for both directions (along with reduced speed limits) when all this bridge construction is done but I’m not holding my breath.

that westbound sidewalk is a pretty accurate replication of the Hawthorne Bridge in the early 90’s, prior to the bridge rehab project that, among other things, widened the narrow (~6′) shared sidewalks. Ah, the (not-so-fond) memories!

I led TNR over the Burnside Bridge last Thursday and one guy crashed into the barricade, or caught his handlebar on it and crashed. He was gone by the time we went back, so he must’ve been okay. We took the lane because there were so many of us (60?) and I didn’t want to overwhelm / scare / hurt any pedestrians.
It would be super cool if they made one side pedestrian only and one side bikes only.

I commute across the bridge (headed east) every day and the right-hook factory at the burnside/grand intersection is, to me, the worst part of this configuration. Lots of drivers just aren’t paying attention, change lanes at the last minute, or merge into the bike lane with no real regard to what they’re doing. These problems aren’t unique to this particular intersection, but they feel noticeably worse than at other intersections in town. There’s a sign across the intersection in front of the car dealership instructing drivers to yield for bikes and pedestrians, but it doesn’t seem to be making much difference. I go out of my way to make myself visible (pull up right next to cars so they can see me, flash my light), but almost every day I have a right-hook close-call.

I think the real test of this set-up, though, will be when better weather arrives in the spring and summer months–lots more foot traffic crossing the bridge will make things a lot trickier.

My view will be a minority one. I think the Burnside Bridge configuration of a couple years ago was the best. Fast cyclists could sprint on the bike lanes, and cargo or delivery bikes had plenty of room there too. Slow cyclists could ride on the raised sidewalk. You could ride at car speeds down Couch and use the lane to ride fast through the S curve. Or you could stick to the bike lane there. It was a lot more flexible. Now it is a slow plodding ride, weaving between partisans, often riding at walking speed.

i ride the burnside bridge both ways 5x per week. westbound is really sketch. if i can see that it is clear i will ride the sidewalk but if i see any other bikes/delivery trikes, i take the lane. eastbound is alright except pedestrians (and cyclists) need to pay attention to the signage and traffic flow. i ride as left as possible and pass in the middle (and westbound peds eventually clue in). i think there should be a solid line indicating a bike area far left. the yield sign helps at the hook inducing intersection. i flash mirror and the sign with my helmet light and it seems to work.

(sidenote: why is there not signage along all bike lanes (like up burnside) indicating turning vehicle must yield?)..