We’ve got new details and graphics on Multnomah County’s Burnside Bridge Maintenance Project that will have a big impact on your use of this crucial central city connection.

As we shared last March, the County is spending $20 million to upgrade and repair the bridge surface, railings, sidewalks, steel frame, electrical system, and more. To make it work, they need to store large construction machines and vehicles on the bridge. The work zone takes up nearly half the width of the bridge. That means the seven-lane bridge (which includes two bike lanes) will be pared down to three lanes and two paths that will be shared by everyone who’s not inside an automobile.

Back in March we didn’t have all the details about lane widths and configurations. Now we do: The County put out an update yesterday.

Here’s what to expect:


➤ The work begins Friday January 5th. There will be a full closure for that weekend through Monday January 8th at 5:00 am. This means you need to use a different bridge to cross the river. After that, the County will maintain the three-lane, two-path profile for the duration of the project through December 2019.

➤ The plan is to work on the south side for the first year (as shown in the graphic), then move the construction zone to the north side in year two.

➤ Biking and walking access will be maintained throughout construction. 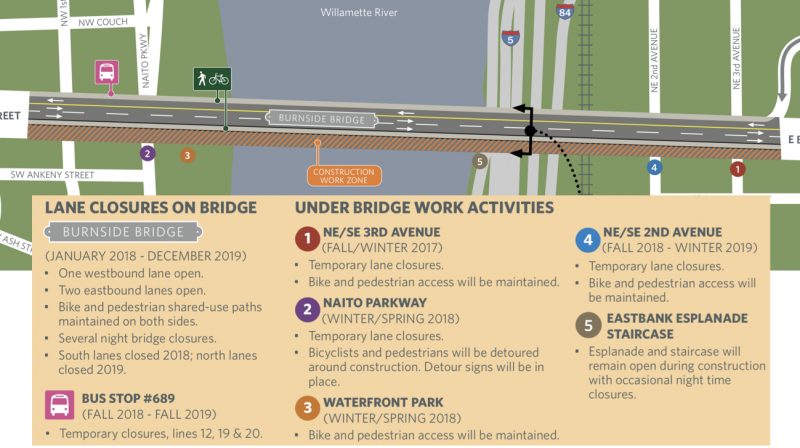 ➤ To reduce potential conflicts in the paths, the County will use stencil pavement markings to encourage people to walk on the right and bike on the left.

➤ A new ramp will be installed to allow bike users to leave the north sidewalk at the west end of the bridge (which is often crowded with people).

➤ The County has asked delivery firms that use large bicycles (like B-Line, UPS, and Portland Pedal Power) to avoid the bridge during peak weekday hours.

Asked why they couldn’t provide more space for bikers and walkers during the project, the County said, “Unfortunately, there are limitations to the space available based on where the repairs need to be made, the bridge structure, and the equipment our contractor will use.”

For more about this project, check out BurnsideBridge.org.

That is nearly a protected bike lane, gosh, almost better then what exists now.

Not really. 8 feet wide is pretty dang narrow for a shared path with significant shy distances for cyclists due to the barriers. I certainly hope these aren’t going to be 2-way for cyclists!

Chris I
Reply to  Oregonlahar

It would have prevented the killing of a pedestrian a few years back when the driver “choked on soda” and walked away (probably drove away, actually) without even a fine.

That sidewalk isn’t anywhere near 8 feet wide when you subtract the following:

Despite promises to the contrary, the bicycle lane on the Morrison bridge was closed by heavy trucks for weeks before the construction began, during, and weeks after the project had been “completed”. This was not communicated via any media channel. I expect the same from this project as well.

The posts for the overhead spans are particularly problematic, since they are right in the middle of the portion of the sidewalk designated for bikes. The others, of course, will be pinch points that may force pedestrians into closer conflict with overtaking bikes.

Will the lane configuration be any different when completed?
Any of these options: https://bikeportland.org/2015/06/15/better-burnside-bridge-look-like-three-possibilities-144426

I am disappointed to learn that this will impact SE 3rd. Getting for the CEID to NOPO, I use this to access the sidewalk on MLK to connect to the bike lanes on LLoyd. For some reason, taking a lane on Grand between Lloyd and Ankeny is not too bad, but I have had a lot of bad experiences on MLK so I avoid it. Thanks for this important update! BTW, I just saw they are preparing to open the right-hand lane of SE Madison as Bus Only between 11th and the bridge(I think)- I saw them torching down the thermoplastic this afternoon. Hopefully the Burnside Bridge will have a bus only lane and improved bike lanes.

I saw recently that the Burnside Bridge is going to be going through some major construction.

It’s great that the County is investing in the bridge – thanks! However, I have a few concerns about missed opportunities and unnecessary impact to transit users. (I don’t use the bridge regularly myself, but am aware of its traffic patterns through occasional travel in the area).

2) Similarly – can this project be an opportunity to reallocate space permanently on the bridge, and thus make the bridge safer and more comfortable for biking and walking, after construction? The pedestrian deaths on the bridge over the years are just far too sad. A bus-only lane with concrete “bus islands” for boarding and deboarding between the bus-only lane and the bike lane would provide more of a buffer between unpredictable and dangerous auto traffic and vulnerable people biking and walking. It would also speed travel for those travelling by bus – which we want to encourage given, among other things, the County’s climate goals.

Should be interesting in the summer when the tourists are wandering around with boxes of donuts, taking pictures of the white stag sign. Not to mention the folks lined up at mission for meals, and camped out on SW side. Taking the lane may be the best option….

This doesn’t look as bad as I thought it was going to be. I took a pay cut in October to work for the same company and this bridge work was one of the reasons I did.

I will still use this bridge to get across even if it means going a little slower for a stretch of my ride.

Feel for the bus riders, though. When I did take the bus, my ride went from about 45 minutes circa 2011-2013 to well over an hour after that. And this is only going to make it worse.

Seriously. When I first saw the design, I thought, “Why two motor vehicle lanes eastbound? Couldn’t they use that space for biking and walking instead?”

Now that I read your comment, I think that lane should be made a bus-only lane.

True. And I think they’re planning to close the bus stop at the west end of the bridge near the stairway to NW/SW 1st Av. as part of the project. Keep an eye on that, as many use it as a Saturday Market access point during the season.

I wouldn’t mind sharing a narrow path with people walking if it was clear all other space had been properly distributed. But 2 eastbound driving lanes is not right — we need either more biking & walking space or a dynamic bus lane.

Also, 12 feet per lane is at least 2 more than necessary. Even FHWA describes lanes narrower than 12 feet as a tool for reducing speeds. For the sake of workers at least, shouldn’t the County want to reduce speeds on the bridge during construction?

the lanes on SE Hawthorne are 9.5 feet wide

The bus doesn’t fit in the lanes on Hawthorne.

Transit bus should be a max of 8’6″ wide. Any mirrors should be narrow profile, breakaway, and mounted up high.

This just goes to show that the Burnside is far too wide, with far too much allocated to cars…the rest of the time.

Normally there are 43 traffic lanes open to cars to cross the Willamette in central Portland. Perhaps we don’t need to allow cars on the Burnside at all during construction. Preserve decently wide pedestrian and bike lanes, plus bus-only lanes. And that’s it.

(duplicate post, but this is the newer story and i commented on the older one)

Westbound I recommend taking the lane. The combined elevated sidewalk issue is really bad. Monday I saw cyclists backed up behind a B-Line bike doing 5mph. There was no way a pedestrian could get by in that situation.

Eastbound is much better (just got to watch for right hooks).

Rode westbound for the first time today. It is dangerously narrow. Will be finding a new commute route to/from downtown 🙁

I didn’t find westbound dangerously narrow, but it was irritatingly narrow. You get stacked up behind the slowest rider. There are not many pedestrians when I ride in, but the few I saw were conscientiously walking to the right. Eastbound was similar, just as irritatingly narrow (a B-line bike would bottle up E/B just like W/B), and there really need to be pavement markings or signs at MLK to warn right-turning vehicles to yield to bikes.

The eastbound ride has already been made slow by the raised bike lane through the S curve, and now it is even slower.

Two years of this? Sigh.

There are pedestrians when I ride and even with their best efforts to stay right, it is extremely tight especially where there is a lamppost and they have to step out a little. Can’t imagine a bike with a trailer encountering someone with a shopping cart for example. Regular occurrence on this bridge. City says they asked the construction company to add signage at MLK Eastbound at least so that’s something (although they made clear it’s not their responsibility).