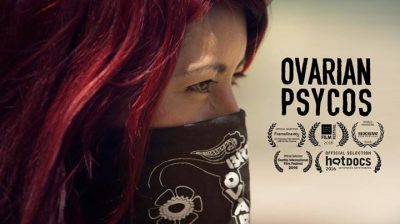 A documentary based on the East Los Angeles-based activist group known as the Ovarian Psycos will be shown in Portland this Sunday night as a benefit for the Community Cycling Center.

The “OVAS” as they’re often known — which stands for Overthrowing Vendidxs (vendidos, or sell-outs), Authority, and the State — began in 2010. They define their politics and activism as having, “feminist ideals with indigena understanding and an urban/hood mentality!” Using bicycles as a tool for power and organizing, the Ovas annual rides include the Black Mass (“Resistance on Two Wheels”), Clitoral Mass, protests against gentrification, and more. Beyond riding, they empower and inspire young womxn of color to become community leaders.

“We are connecting dots,” they write on their website, “becoming aware of community agencies, spaces and movimientos in an effort to solidify our local networks making everything and everyone more accessible for and to each other.”


The eponymously named 2016 film that highlights their movement chronicles the leader of the Ovarian Psycos as she struggles to find balance between family dynamics and her street activism. The film was created by Joanna Sokolowski and Kate Trumbull-LaValle and distributed by Women Make Movies.

The screening is being brought to Portland by the Community Cycling Center and proceeds from the evening will benefit their programs. CCC Executive Director Kasandra Griffin said they chose the film because, “It is the goal of the Community Cycling Center to lift people up with bicycles — to use bicycles as a vehicle for social change… and this womxn of color collective is doing just that.”

The screening is this Sunday, January 28th, 7:00 pm at Hollywood Theater (4122 NE Sandy). You can buy tickets online or at the door. There’s a group ride to the screening that leaves Ex Novo Brewing in north Portland at 5:30. Link to the Facebook event page and more info about the event on the BP Calendar.

Learn more about the Ovarian Psycos via their homepage or on Instagram.

Middle of the Road Guy
Reply to  FRED_TRAMPLER

C’mon dude, no need for all caps.

FRED_TRAMPLER
Reply to  Middle of the Road Guy

ITS THE SHIFT KEY. I HOLD IT DOWN FOR EMPHASIS

Middle of the Road Guy
Reply to  FRED_TRAMPLER

If you can’t make a point without yelling, try harder – not louder.

I have so much to say, but what good would it do?

MAYBE YOU SHOULD TRY 2 B MOAR TOLERANT OF CAPITOL LETTERS