A project that offers a major update to SW Naito Parkway will get it first official public viewing this coming Wednesday (1/10). 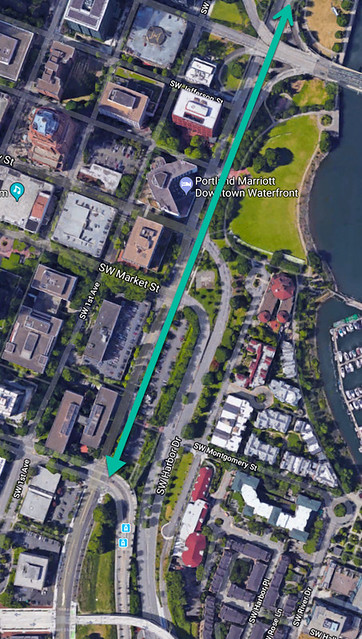 The new bikeway would connect to Orange MAX Line improvements and would provide a direct connection between SW and the Hawthorne Bridge without going through Waterfront Park or the Riverplace Marina district.

As we reported back in September, the Portland Bureau of Transportation plans to do a full rebuild and repave of Naito Parkway (99W) between I-405 and SW Jefferson. Thanks in part to a state law that requires road reconstructions to include bikeway facilities, PBOT plans to to add a separated, 12-foot wide cycletrack from SW Harrison to north of the Hawthorne Bridge.

According to PBOT’s draft plans, the new cycletrack would start at Harrison as an off-street facility where there’s currently only a sidewalk. The facility would then transition to a two-way, separated bikeway on Naito Parkway at SW Market and continue in that configuration until just north of the Hawthorne Bridge near the Salmon Street Fountain. At that point it would connect to Better Naito, the currently seasonal protected bike and walkway on Naito Parkway that is likely to be made permanent by the end of this year.

In September, PBOT’s Group Manager for Planning, Policy and Projects, Art Pearce told us, “Not every paving project allows us to recreate the traffic flow in an area, but in this case, we are able to analyze the potential to use one travel lane to provide safer bicycle and pedestrian access.”

In addition to the bikeway, PBOT also wants to alleviate backups for drivers and improve streetcar operations by adding new traffic signals at Jefferson and the Hawthorne Bridge and signal upgrades at Market and Clay. To make it easier to cross Naito, a new midblock signal could be added between Harrison and Clay and a full signal would be added at Jefferson with new connections between downtown and Waterfront Park. 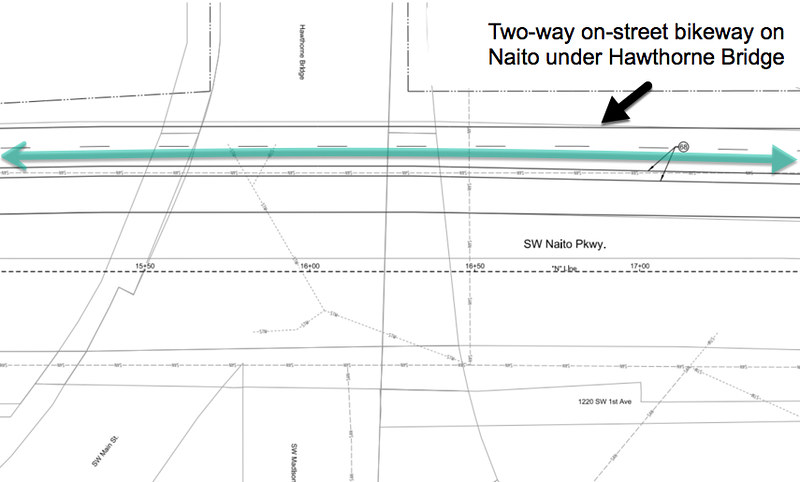 At next week’s open house, the public will be able to view new visualizations and will be able to share feedback on these potential changes. Funding for the project is coming from Portland’s Fixing Our Streets program and from the Oregon Department of Transportation. PBOT plans to construct the project in 2018. This project was originally part of a larger repaving that included improvements to SW Main between 1st and 2nd.

UPDATE: PBOT just sent over updated plans. They are now at 60% design. I will update the post ASAP. Check out the latest plans here.

I’m curious to see how they plan to handle the bikeway crossing the Hawthorne Bridge on-ramp from southbound Naito. It sounds like they’re planning to add a signal there, so will the bikeway get its own separate signal that will alternate with the on-ramp?

Close the ramp since the outer lane needs to be bus only. Problem solved, except without spending enough money or insulting cyclists enough.

Next is to redo the leftover Harbour Freeway on Naito Parkway from Barbur Blvd to downtown.

The merge across the Naito exit on Barbur is awful during high-stress traffic periods. I typically take the Naito to the bridges because it’s quicker and feels less risky (to me) than using the barbur bike lane. If someone as risk-tolerant as me actively avoids merging to stay in a bike lane maybe Mikael Colville-Andersen is right about portland…

Soren, I agree. The worst time is evenings when the heavy machinery is backed up crossing Ross Island Bridge. It befuddles me the backup can go all the way to Capitol Highway, because it is seemingly caused by the fact there is 1 stop sign for all the vehicles vs. a traffic light to get onto the Ross Island Bridge.

Where is the wisdom there ODOT?

It seems like motor traffic would flow far more smoothly and safer with some signal installations.

I just confirmed with Susan Hanson at ODOT rapid flash beacons for pedestrians will be installed for people walking across Naito or Barbur at the split. According to her they and PBOT need to decide where the beacons will go and she was unsure if this is scheduled for this year or next. I’d encourage anyone with concerns about Barbur to utilize the ODOT website: http://www.barbursafety.org

As for crossing onto the PBOT section of Barbur in the mornings (to reach 4th Ave) I’ve begun grounding my battery to slow down and awaiting for traffic to clear behind me then crossing over onto the Barbur section. Barbur flows inefficiently enough for vehicles there is always a safe gap in the traffic. This feels safer and faster than using the crosswalks which is ODOT’s suggestion with their design.

Jonathan, Thanks for bringing us important bike infrastructure news like this, we would certainly not get it by reading the big “O” or the two entertainment papers. Knowing this kind of thing ahead of the meetings is crucial for the bike community to get out in numbers and affect policy before it is too late. Please ignore the auto-centric commenters that seem to want some kind of “fair and balanced” coverage of transportation issues. We are in a fight for the future of the planet, and the fate of humanity and there are good guys and bad guys and for too long the bad guys have won. Keep up the good fight as,” the arc of history is long but it bends toward justice*” and “cycling”.

Like many, I am always unable to attend these due to work scheduling. Will there be opportunities afforded for input for the many who cannot make it? Also, at the live event hopefully meeting hijacking will be strategically prevented.

latest plans link says I don’t have access to the page.

Sorry about that. Here’s a better link

If adopted as proposed, this would be an enourmous step foreword. Hopefully Better Naito becomes permanent as a result of this project. How would events like Cinco de Mayo and Rose Festival affect traffic on the route, once it’s built? If SW Max and it’s comlpanion ped/bike trail become reality, connecting that corridor to the Naito route would become important. It also could make a future extension south along the Barbur/99w corridor to Tigard (and maybe further south, if we played our cards right) at least a feasible argument for the future.

This is wonderful news for Barbur commuters.

When I worked on the central eastside the fastest route from SW was Barbur straight onto Naito to cross the Hawthorne. This section always felt extremely and unnecessarily confusing on a bike especially with the way the Lincoln Max crossing feeds into a wide MUP to Harrison. Do you take the lane and risk getting mowed down by heavy machinery or ride the sidewalk as if its still the MUP even though you’ll be breaking the law by doing so because it is clearly a sidewalk?

Looking through the drawings I think this is great. It’s a real step up from anything PBOT has built to date. The protected bike lanes we already have in downtown have been made on the cheap with paint, wands or movable planters. This will separate cyclists from motorists with 12″ wide concrete curbs at a minimum; but for most of its length it will have 5′ wide planter strips separating the two.

I would probably like it better if they used concrete and asphalt to differentiate between space for pedestrians and bicyclists respectively, instead of the green thermoplastic they’re proposing, but that’s a quibble.

If (or more likely when) we build a permanent Better Naito there will be a continuous protected bike lane all the way from SW Lincoln to the Steel Bridge. That is going to be really useful for all kinds of different journeys.

What really bothers me is that they’d never build a freeway a few blocks at a time. There would be a big picture plan and everything would work together. You wouldn’t have a 6 lane road suddenly become a 2 way gravel road. What good is a few blocks of protected bike lane when the next thing you know, you gotta cross traffic and there isn’t even a bike lane?

We get all excited for crumbs because it’s better than what we can normally get. We should be getting new infrastructure based on need and use, not when they do something for cars they gotta throw some crumbs.

Is there any possibility that there will ever be a sidewalk on the eastside of Naito along the park. Having a pedestrian walking lane in the road complicates an already weird configuration, especially when there’s cars parked in half the lane unloading equipment or there’s fences up for some sort of festival. I understand it would be more complicated than it seems due to street light locations, tree roots and the Battleship Oregon Memorial. But if Better Naito is gonna become permanent could they please make it more approachable for walking too!

>What really bothers me is that they’d never build a freeway a few blocks at a time. There would be a big picture plan and everything would work together.

It is embarrassing to see a bunch of cyclists celebrating getting banished from the roadway. Thanks for the notice though. I will be there to express my disapproval.

Banished from the roadway by taking land currently allocated to motor vehicles and re-purposing it to be for cyclists only. How awful.

Wow, there are still vehicular cyclists lurking here? It’s not the 1970s anymore.

I’ll be interested in seeing how they get a bike lane to run through the onramp to the hawthorne bridge. i bike and drive this area, and anything they do here will be an improvement. at the very least, the pavement is in terrible shape, so fixing that will be great.